This sequence begins with a wide-field CTIO optical image which then combines with an X-ray image from the ROSAT observatory of Puppis A, the debris field created when a massive star exploded at the end of its life. The next image from Chandra shows the close-up view of the small, dense object, known as a "neutron star", left behind after the explosion. Chandra observations from 1999 and 2005 clearly show that the neutron star has moved over a period of five years. Astronomers calculate this neutron star is traveling at about 3 million miles per hour and is destined to exit the Galaxy million of years from now. 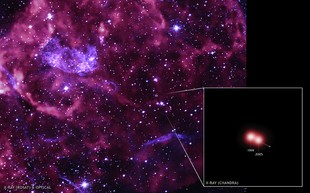 A wide-field composite view of the supernova remnant Puppis A (X-rays from ROSAT in purple, optical data in pink) puts the motion of the neutron star RX J0822-4300 into context. The explosion that created the supernova may have been lop-sided, kicking the neutron star in one direction and much of the debris in the other. The inset shows Chandra observations spanning 5 years that clearly reveals motion over that time. Astronomers calculate that RX J0822-4300 is moving at about 3 million miles per hour, making it one of the fastest moving objects ever observed.

Newswise — One of the fastest moving stars ever seen has been discovered with NASA's Chandra X-ray Observatory. This cosmic cannonball is challenging theories to explain its blistering speed.

Astronomers used Chandra to observe a neutron star, known as RX J0822-4300, over a period of about five years. During that span, three Chandra observations clearly show the neutron star moving away from the center of the Puppis A supernova remnant. This remnant is the stellar debris field created during the same explosion in which the neutron star was formed about 3700 years ago.

By combining how far it has moved across the sky with its distance from Earth, astronomers determined the neutron star is moving at over 3 million miles per hour. At this rate, RX J0822-4300 is destined to escape from the Milky Way after millions of years, even though it has only traveled about 20 light years so far.

"This star is moving at 3 million miles an hour, but it's so far away that the apparent motion we see in five years is less than the height of the numerals in the date on a penny, seen from the length of a football field," said Frank Winkler of Middlebury College in Vermont. "It's remarkable, and a real testament to the power of Chandra, that such a tiny motion can be measured."

"Just after it was born, this neutron star got a one-way ticket out of the Galaxy," said co-author Robert Petre of NASA's Goddard Space Flight Center in Greenbelt, Md. "Astronomers have seen other stars being flung out of the Milky Way, but few as fast as this."

So-called hypervelocity stars have been previously discovered shooting out of the Milky Way with speeds around one million miles per hour. One key difference between RX J0822-4300 and these other reported galactic escapees is the source of their speed. The hypervelocity stars are thought to have been ejected by interactions with the supermassive black hole in the Galaxy's center.

This neutron star, by contrast, was flung into motion by the supernova that created Puppis A. The data suggest the explosion was lop-sided, kicking the neutron star in one direction and the debris from the explosion in the other.

The supernova was precipitated when the core of a massive star imploded to form a neutron star. Computer simulations show that the infall of the outer layers of the star onto a neutron star releases an enormous amount of energy. As this energy propagates outward, it can reverse the infall and eject the outer layers of the star at speeds of millions of miles per hour. Due to the complexity of the flow, the ejection is not symmetric, leading to a rocket effect that propels the neutron star in the opposite direction.

The breakneck speed of the Puppis A neutron star, plus an apparent lack of pulsations from it, is not easily explained by even the most sophisticated supernova explosion models.

"The puzzle about this cosmic cannonball is how nature can make such a powerful cannon," said Winkler. "The high speed might be explained by an unusually energetic explosion, but the models are complicated and hard to apply to real explosions."

Other recent work on RX J0822-4300 was published by C.Y. Hui and WolfgangBecker, both from the Max Planck Institute for Extraterrestrial Physics in Munich, in the journal Astronomy and Astrophysics in late 2006. Using two of the three Chandra observations reported in the Winkler paper and a different analysis technique, the Hui group found a speed for RX J0822-4300 that is about two-thirds as fast, but with larger reported margins of error.

The research by Winkler and Petre was published in the November 20 issue of The Astrophysical Journal. NASA's Marshall Space Flight Center, Huntsville, Ala., manages the Chandra program for the agency's Science Mission Directorate. The Smithsonian Astrophysical Observatory controls science and flight operations from the Chandra X-ray Center in Cambridge, Mass.