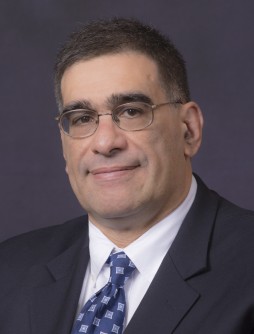 The award, also known as the Gold Medal, recognizes Dr. Melian’s outstanding leadership and his many years of service to radiation oncology and radiology. Dr. Melian received the Gold Medal during the society’s April 20, 2017 meeting.

Dr. Melian twice has been named Loyola University Chicago Stritch School of Medicine Teacher of the Year in radiation oncology. The Association of Residents in Radiation Oncology named Dr. Melian 2014 Educator of the Year.

He also serves on the American College of Radiology’s executive council. Dr. Melian is a long-standing member of the American Society for Therapeutic Radiology, Radiological Society of North America, Gilbert H. Fletcher Society and North American Skull Base Society.

He is an author of dozens of papers in peer-reviewed journals and co-author of eight book chapters on radiation oncology and neurological sciences.

Dr. Melian and his wife, Jan, live in Burr Ridge, Illinois. They have four children and seven grandchildren. He is an avid rower and competed in multiple National Rowing Championships between 1980 and 1995.

The Chicago Radiological Society is dedicated to disseminating knowledge in the radiological sciences by hosting multiple educational meetings each year. Members also advocate for the profession at local, state and national levels. The society, founded in 1913, is the oldest, continuously active radiological society in the United States.