“Structures are all around us, and someone needs to design and predict how they will behave before they are built,” Hillman said. “When you have the simulation, it’s like having a sensor everywhere. You see all of the stresses and strains.”

According to Hillman, 3D fracture simulation has been a long-standing challenge in the field of computational mechanics. The inherent limitations of differential calculus, used to compute in traditional fracture simulations, requires engineers to mathematically describe every single crack, no matter the shape or size.

“One crack is fairly simple to simulate, but when you have multiple, they can form very complex patterns,” Hillman said. “The speed of the fracture, whether it branches or merges, where it’s propagating — it all becomes very complicated.”

In recent years, an alternative technique has shown promise to run complex simulations without describing the entire fracture pattern. Hillman noted this new approach, known as peridynamics, uses integral equations to process the simulation, but it possesses serious shortcomings — such as issues with accuracy and stability — that limit its potential.

“It might sound kind of strange, but it’s possible that your simulation could completely blow up, which is non-physical unless you’re actually simulating an explosion,” Hillman said. “We call that an instability for obvious reasons.”

In his preliminary research, Hillman developed a new mathematical theory, called reproducing kernel peridynamics (RKPD), that creates a “bridge” between the traditional approach and peridynamics. With this merged framework, he is able to borrow techniques from the older, time-tested method and apply them to new complex simulations — without needing to explicitly describe the entire fracture pattern.

With the help of the Institute for Computational and Data Sciences Advanced CyberInfrastructure, Penn State’s high-performance research cloud, Hillman will be able to use RKPD to resolve peridynamics’ issue with accuracy in simulations of complex fracture. He said the five-year, $580,845 CAREER Award will also allow him to make further enhancements, such as applying stabilization methods, integrating techniques to handle shockwaves and embedding physics into the simulation.

“This unifying theory will open a floodgate for vast improvements to the newer method,” Hillman said. “If you have failure because of a harsh-loading impact or a blast, it involves a lot of different kinds of physics. Once you have that bridge, you can borrow some of those techniques and apply them to the new method.”

The CAREER Award will also allow Hillman to develop an open-source software made freely available to academics, scientists and engineers to facilitate reproducible research and to help them learn the fundamentals of computational fracture mechanics.

Hillman also plans to hold undergraduate seminars to explore simulation results in the Immersive Construction Lab at Penn State, which uses stereoscopic projectors on three large screens to create an immersive, 3D experience. He said he hopes that the environment will excite students and help recruit more of them to careers in numerical analysis.

“You put on these 3D glasses, and you almost feel like you can reach out and touch it,” Hillman said.

The NSF CAREER Program supports early-career faculty who have the potential to serve as academic role models in research and education. Activities pursued by early-career faculty should build a firm foundation for a lifetime of leadership in integrating education and research, according to the NSF website. 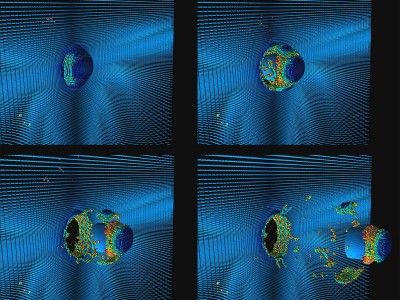 Caption: Hillman has already made advances in the field of computational mechanics, like the mesh-free modeling method shown here, and will now develop a new numerical framework to simulate fracture in structures and materials. 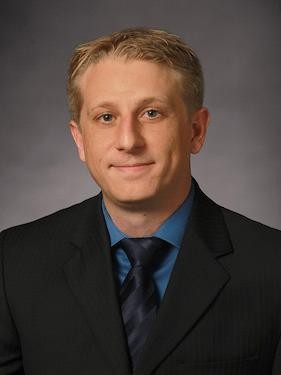