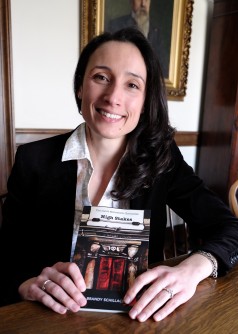 Created by Brandy Schillace, a Case Western Reserve University alumnae and research associate in the history department, the fictional Jacob made his debut this month in High Stakes, the first of nine books in The Jacob Maresbeth Chronicles (Cooperative Press, 2014).

The series’ second book will arrive in May, and a third later this year.

Being “normal” is important in Jacob’s story about a teenager who likes to surf and swim, but has a big secret that he’s only shared with his best friend.

Jacob struggles with a rare blood disorder that requires a blood-only diet. This understandably creates problems in Jacob’s life, and he has to creatively untangle himself from awkward situations in order to appear as “one of the guys.”

Schillace begins High Stakes in Newport News, Va., Jacob’s hometown. It quickly shifts to Cleveland where he reluctantly begins a dreaded summer visit with his aunt, a professor at a local college.

His attitude quickly changes—and suspense builds—as Jacob develops a crush on his aunt’s beautiful graduate assistant, who is researching vampires for her dissertation.

What happens is left to the reader’s discovery in the book’s 142 pages. Schillace’s story about Jacob actually began in 2007 as a dare among three graduate students in Athena Vrettos’ Gothic literature course at CWRU. The goad: write a short story as the assigned final paper.

Schillace was the only one to follow through with the challenge, writing the short story in one evening (and she still turned in a final paper). Over the past six year, she added to the short story that turned into the series.

Schillace also has in the works a three-book chronicle, called The Witchwood at Nob’s End and is nearing completion of a forthcoming nonfiction book called Death’s Summer Coat (2015), which examines grief rituals from other cultures to better understand our own. Schillace, PhD, and SAGES fellow who teaches seminars on the history of science and 18th century Gothic literature, said much of her writing is about where humans and medicine meet. It’s an interest she developed as a teen, spending hours reading history books in cemeteries. Reading about bubonic plague, she was both fascinated and horrifies to discovery how many people—especially children her own age—died of disease This early interest and further study of medical history raised her concerns for young people who strive for normal lives while battling illnesses or coping with disabilities.

Schillace, herself, carved out a “normal life” in an underground house on 50 acres near the old Peabody Coal mining land in Coshocton, Ohio. Her mother’s cancer and her father’s heart disease gave her a rare perspective on life.

When Schillace is not juggling work and writing, she is also the managing editor of the journal, Culture, Medicine and Psychiatry. The publication was once housed at Harvard University, but is now at Case Western Reserve.

She also has opportunities to write about medical history in her roles as blogger and guest curator at CWRU’s Dittrick Medical History Center, and has written for the British Medical Journal’s Medical Humanities Blog and for the Centre of Medical Humanities at Durham, UK.