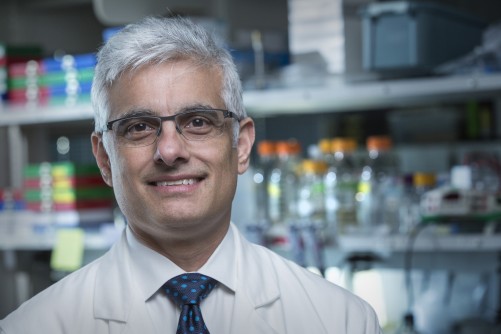 By adding an experimental drug to a standard chemotherapy regimen, a subset of patients with metastatic pancreatic cancer had a significantly longer period before the cancer progressed as compared with those who received the standard treatment, according to a Phase 2 clinical trial led by Dr. Sunil Hingorani, an investigator at Fred Hutchinson Cancer Research Center. The randomized, controlled trial found that when the experimental therapy was given to participants whose tumors had a lot of the drug’s target molecule, they had four months more of progression-free survival than participants in the control group who only had the chemo.

Newswise — SEATTLE — May 31, 2017 — By adding an experimental drug to a standard chemotherapy regimen, a subset of patients with metastatic pancreatic cancer had a significantly longer period before the cancer progressed as compared with those who received the standard treatment, according to a Phase 2 clinical trial led by an investigator at Fred Hutchinson Cancer Research Center.

The randomized, controlled trial found that when the experimental therapy was given to participants whose tumors had a lot of the drug’s target molecule, they had four months more of progression-free survival than participants in the control group who only had the chemo.

For anyone not familiar with the rapid deadliness of pancreatic cancer, it may be hard to see the significance of the few additional months before disease progression. But time is precious for patients with this cancer: Only about 8 percent of all pancreatic cancer patients survive five years after diagnosis.

Dr. Sunil Hingorani, the faculty member at Fred Hutch who led the trial, is scheduled to present the findings at 10:24 a.m., June 4, at the American Society of Clinical Oncology annual meeting in Chicago. ASCO abstract number 4008.

Hingorani said that the results reassure him that it was the right move to advance the drug, called PEGPH20, into the worldwide Phase 3 trial that opened last year.

“We still haven’t fully proven anything yet, strictly speaking, but I think [this strategy] is very rational,” he said. “Let me put it this way: I think it would be irresponsible not to finish the global Phase 3 trial as the most rigorous test of this hypothesis. I think we’re obligated now to answer the question.”

Hingorani consults for Halozyme, the PEGPH20 drugmaker and the sponsor of these trials. The company began this year to provide funding through Fred Hutch to support Hingorani’s research on the drug.

Hingorani’s earlier research led him to the drug because he believed it could address a challenge posed by many pancreatic cancers: The tumors have very high internal pressures that collapse local blood vessels and prevent cancer-killing drugs from getting in. PEGPH20 reduces those pressures so chemotherapies circulating in the blood can penetrate tumors.

The experimental drug, which was created from the blueprint of a naturally occurring enzyme, breaks down a molecule called hyaluronic acid that is produced in bulk by many pancreatic cancers.

Hyaluronic acid, or HA, is naturally found in the human body; it readily binds water to create a gel fluid, making it an excellent shock-absorber in your knees, for example. But in pancreatic tumors, it spells trouble. As the gel fluid builds up, it raises the tumor’s internal pressure, squeezing local blood vessels shut. Patients whose tumors have a lot of HA also tend to have a poor prognosis.

Hingorani and his team first conducted studies in mice that showed how PEGPH20, in combination with chemo, permanently reduced the amount of pressure-boosting HA inside the mouse tumors. It caused the tumors to shrink and increased the mice’s survival time.

In the Phase 2 trial, patients with late-stage pancreatic cancer were randomly assigned to receive a standard-of-care, first-line combination chemotherapy either with or without PEGPH20. When the results of all 234 evaluable patients on Halo 202 were grouped together, the apparent benefit of PEGPH20 was small ― a matter of just a couple extra weeks of progression-free survival.

“If this was all the potential that this strategy represented, I wouldn’t pursue this [research further],” Hingorani said. “That’s not enough for me.”

But a stark difference emerged when the results were divided up by how much of the drug’s target, HA, patients’ tumors contained: In the subset of 80 patients whose tumors had high levels of HA, adding PEGPH20 to chemo resulted in an average of 9.2 months before disease progression; with chemo alone, this timespan was just 5.2 months.

Hingorani also reported that the unexpected, elevated risk of blood clots associated with PEGPH20 ― which resulted in a temporary halt of the trial in 2014 ― equalized between the patients receiving PEGPH20 and those in the control group, and dropped overall, after the study was restarted, due to the addition of a blood thinner to all patients’ regimens.

“These are the real take-home messages to me, namely, the progression-free survival in target-rich [high-HA] patients and the ability to give the enzyme safely,” Hingorani said.

Because the Phase 2 trial results suggest that the benefit of the experimental drug is restricted to the patients with high levels of HA in their tumors, only patients with such tumors qualify for the new Phase 3 trial. And the Phase 3 trial is designed to offer a more stringent test of the benefits of the new drug than its predecessor: Aimed at advancing the drug toward potential FDA approval, the trial’s goal is to determine whether PEGPH20 actually increases participants’ lifespans, not just their time to disease progression. (It’s possible a treatment could achieve the latter without impacting the former.)

The investigators’ exploratory analysis of the Phase 2 trial data suggested that the experimental drug boosted the lifespans of patients with high-HA tumors to an average of nearly a year after diagnosis ― which, if shown definitively in the Phase 3 trial, could be a new benchmark for this cancer, Hingorani said.

Hingorani launched the Phase 3 trial before handing off its leadership to two other colleagues in the field, Dr. Margaret Tempero of the University of California, San Francisco and Dr. Eric Van Cutsem at the University of Leuven in Belgium. As he steps back from his leadership role on this project, Hingorani is satisfied by the solid scientific foundation the investigators have lain to justify moving forward with the development of this drug.

In light of the grim timelines associated with a pancreatic cancer diagnosis, he said, patients have no time to waste on anything less.

“Patients get one shot on goal, if that, with this cancer,” he said. “No cancer is more daunting than pancreas cancer.”