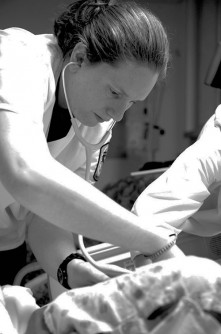 Newswise — The annoying rooster was a wakeup call, as was the constant, searing heat. But what really opened up Peace Corps volunteer Ashley Blocker’s eyes in Togo, West Africa, was interacting with the people, a group whose openness and generosity helped Blocker see that her own future lay in nursing. "I was excited for the opportunity study in Baltimore and particularly intrigued at the prospect of being part of the Community Outreach Program, gaining experience in providing health services to vulnerable and underserved populations throughout the city.

Blocker, a student at the Johns Hopkins School of Nursing, recently shared the story of her journey to nursing.

What got you into this field?

Three weeks after I began my studies at Tulane University for a master’s in public health, New Orleans was devastated by Hurricane Katrina. I immediately relocated to Houston and volunteered at the Astrodome conducting rapid health assessments of evacuees. This experience piqued my interest, but it was solidified in the Peace Corps working with incredible health professionals for over two years. What did it feel like to be in Togo?

I remember stepping off the plane and being completely overwhelmed by the heat, and it was already late in the evening! I lived in a compound of nearly 16 people, depending on the week, who spoke four different languages. One little girl, Afi (who I nicknamed “Morsel,” because she was so cute), was my first teacher in the local language. We would have full conversations in a completely different language for hours, not knowing exactly what the other was saying yet simultaneously understanding everything. It was beautiful.

What type of work did you do? I started working with a small NGO that worked primarily with people living with HIV/AIDS. Hearing stories of people unable to provide food for their families or pay for long trips to pick up medications, I helped develop an idea to create a community plantation. Not only would they be able to generate income, but by planting protein-rich crops (corn, soy, peanuts, and Moringa) they would also improve their diets. What was a typical day like?

A typical day started with my alarm clock (I mean rooster) followed by breakfast with “family” or friends. A typical week consisted of two to three days at the hospital, two days of meetings, and one day of work on our land. My friends would laugh so hard when I was in the field until I could prove myself worthy of manual labor. We would walk or ride the 3 kilometers to the field with all of our tools and spend the day. On hospital days, I would work with a local nurse on vaccination campaigns and assist members from the ministry of health on large-scale prevention programs.

What part of being a Peace Corps volunteer is going to make you a better nurse? The two most critical skills I acquired were flexibility and adaptability. And I quickly found that a good sense of humor can transcend even the most challenging of obstacles. Ashley Blocker graduated July 18 as part of the Class of 2014 accelerated baccalaureate program at the Johns Hopkins School of Nursing. This Q&A appears in the Summer 2014 issue of Johns Hopkins Nursing magazine. 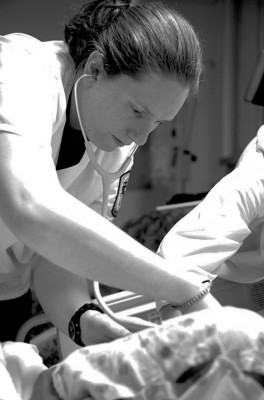