Consumers Rely on Signage Over Other Ad Media 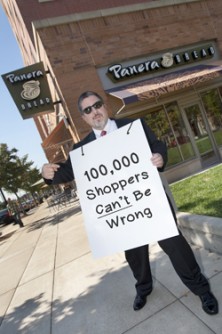 Newswise — Businesses looking for a sign on how to prosper in a down economy need look no further than their own indoor and outdoor signage.

That’s because University of Cincinnati analysis of a market research survey of more than 100,000 North American households found that shoppers are drawn into stores and make important quality inferences on the basis of signs.

In fact, one of the surprising finds of the UC research performed in collaboration with BrandSpark/Better Homes and Gardens American Shopper Study™ is just how highly ranked signage is among forms of communication used to provide new product information.

When consumers were asked to rate the perceived usefulness of various media, only television was ranked more highly than signage as the most useful source of new product information.

According to UC researcher James J. Kellaris, “Although television was rated as the most useful source of new-product information, indoor signage (such as those at point-of sale, e.g., signage at the ends of store aisles or at check outs) tied with magazine ads as the second most useful source. And outdoor signage ranked third, followed by radio ads, Internet ads and finally, newspaper ads.”

He added, “So, what we found was that signage, a basic form of technology and communication that evolved in antiquity still works even in today’s Internet age.”

Kellaris will present his findings at the National Signage Research and Education Conference held Oct. 12-13 in Cincinnati, Ohio, a city that serves as a premier global hub for the marketing industry. Kellaris holds the James S. Womack/Gemini Corporation Chair of Signage and Visual Marketing in the Carl H. Lindner College of Business at UC.

MORE FINDINGS: SMALL SIGNS A PROBLEM FOR SHOPPERSThe survey also explored an important visual acuity issue: driving by and failing to find a business because its signage was too small or unclear.

“This appears to be a major problem,” said Kellaris. “Nearly 50 percent of American consumers report that this has happened to them.”

Although the problem is universal across genders and regions, it varies across age groups. Surprisingly, this is not a “senior citizen” phenomenon, as both younger and older age groups report more signage communication failure than the middle (35-49, 50-64) age groups.

“What we see is a U-shaped distribution with the younger shoppers being just as affected as boomers and seniors. Surprisingly, 64 percent of women aged 18 to 24 report having driven by and failed to find a business due to small, unclear signage.”

BACKGROUND ON THE SURVEYThe BrandSpark/Better Homes and Gardens American Shopper Study™ is performed annually by leading independent market research firm BrandSpark International in conjunction with the Better Homes and Gardens Best New Product Awards program. The sample for this survey includes over 100,000 North American households, with approximately 63 percent being U.S. consumers ages 18 to 65+.

“The survey provides a goldmine of data,” said Kellaris. “Our ongoing partnership with BrandSpark allows marketing faculty with varying interests to explore the database to uncover consumer insights relevant to many business areas, including the signage industry.”

The most recent survey included several items of interest to those in the signage business, including some critical issues—such as the economic value of signage.

For researchers like Kellaris, the importance of the collaboration with BrandSpark and Better Homes and Gardens Best New Product Awards program lies in the ability to track these initial findings with a massive sampling year after year.

“With an annual survey, one can tweak or add new questions. We can also spot trends, track changes over time,” said Kellaris. “We can even assess the impact of regulatory changes within geographic areas as sign codes are updated. This has implications for businesses and communities.”