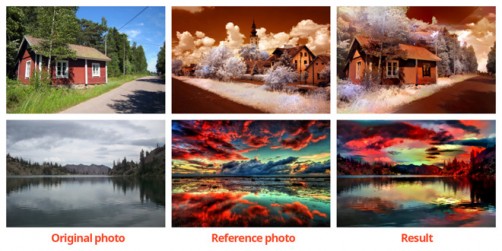 Newswise — There may a new cool tool for image editing software in the future. If you’re a fan of making your photo into a Monet or Warhol, there’s now a way to make changes to a photograph by transferring the style and other elements from another photograph.

Cornell University researchers Computer Science Professor Kavita Bala and PhD student Fujun Luan along with Adobe collaborators Sylvian Paris and Eli Shechtman have released a paper detailing their new Deep Photo Style Transfer. The paper explains how the researchers have augmented style transfer so that it can transfer the look of one photo onto another using neural networks to make sure the details of the original image are preserved. The researchers will present their paper at the Conference on Computer Vision and Pattern Recognition in July.

“There has been a lot of interest in the idea of stylizing photographs,” said Bala. “What motivated us is the idea that style could be imprinted on a photograph but it is still intrinsically the same photo. This turned out to be incredibly hard. The key insight finally was about preserving boundaries and edges while still transferring the style.”

The researchers used deep machine learning to add a neural network layer that pays close attention to the various edges within the image, like the border between a tree and a lake. “The method we came up with is surprisingly very effective. It was a tough nut to crack, so when we got it working after many attempts at a solution it was a big break though,” said Bala. “The response has been outstanding. It has definitely captured people’s imaginations as a way to stylize photos in a more dramatic way.”