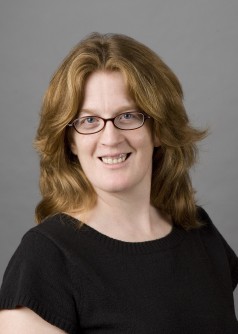 "Transgender issues have become a way for public debate around what are appropriate gender expressions and what kinds of gender identities and presentations of self, should and will be allowable in the public sphere," Davis said.

Her expertise is important at a time when many hold discussions about bathroom legislation regulating which facilities individuals should use based on gender identity.

Professor Davis’ courses explore cultural diversity & social inequalities, focusing on gender, sexualities, bodies, and identities. Many courses include guest speakers (such as a spoken word poet/performing artist; health care policy analyst, or director of a LGBTQA Resource Center), involve field trips or off-campus travel, and/or incorporate public sociology projects. Her courses are often collaborative: intro sociology students work with geology students to research the lifecycle of a consumer object and Sociology of the Body students and Human Anatomy students participate in field trips to the Rare Books Room at UI and to the BodyWorlds exhibit in Minneapolis to explore different perspectives on the body. Professor Davis also works closely with students on their research, sponsoring student research presentations at the Iowa Sociological Association meetings, and the Midwest Sociological Society meeting.