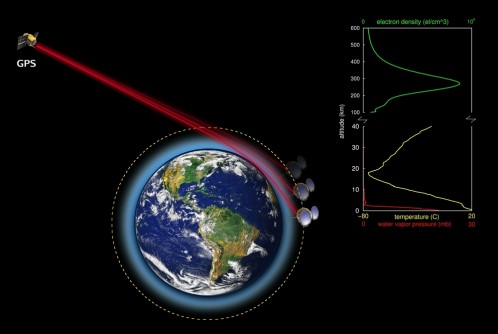 Image courtesy of the COSMIC Program.

Receivers on the COSMIC satellites measure the bend and delay of radio signals emitted by GPS satellites to infer information about the atmosphere. 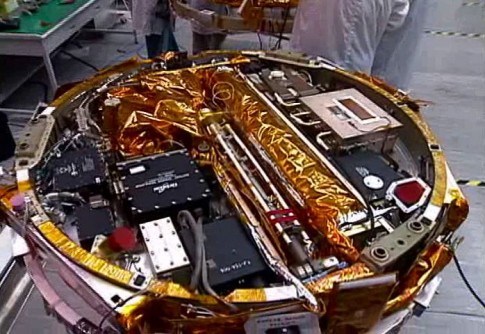 A COSMIC microsatellite during testing. Just over 6 inches deep, the satellite contains a GPS occultation transmitter, a Tiny Ionospheric Photometer, and a tri-band beacon to relay data to ground stations.

Newswise — A constellation of six small satellites — rocketed into space a decade ago — has made outsized contributions to our ability to forecast severe weather events, track climate change, and understand space weather.

April 15 at 01:40 UTC marks the 10-year anniversary of the launch of the Constellation Observing System for Meteorology, Ionosphere, and Climate (COSMIC). The project is a partnership between Taiwan, where it is called FORMOSAT-3, and the United States.

Over its lifetime, COSMIC has proven to be an extremely cost-effective way to gather an abundance of atmospheric data, including three-dimensional profiles of temperature, humidity, and pressure, as well as electron density in the ionosphere.

"The results have been outstanding," said Rick Anthes, one of COSMIC's founding scientists and president emeritus of the University Corporation for Atmospheric Research (UCAR), which manages COSMIC in the U.S. "COSMIC has significantly improved weather prediction and expanded our knowledge of the atmosphere around the world. It has exceeded all expectations."

In fact, COSMIC has been such a success that the two countries are collaborating on a follow-on mission, known as COSMIC-2 in the U.S. and FORMOSAT-7 in Taiwan.

"I am pleased to say that FORMOSAT-3/COSMIC has much exceeded the original planned 2-year mission goal and continues to operate into the 10-year anniversary and beyond," said Guey-Shin Chang, director general of Taiwan's National Space Organization. "FORMOSAT-7/COSMIC-2 is moving along very well and is on target to launch the first six satellites within a year to replace the decaying COSMIC satellites."

A second set of six satellites is scheduled to launch in 2019.

The roots of COSMIC stretch back half a century and across tens of millions of miles to NASA's Mariner 4 mission to Mars. The mission, launched in 1965, was the first to use a technique known as radio occultation to probe a planet's atmosphere. Radio occultation measures the degree to which a radio signal bends and slows as it passes through the atmosphere — the greater the bend and delay, the denser the atmosphere.

NASA went on to use the technique to explore the atmospheres of several other planets, but radio occultation was not used to gather information about our own atmosphere until three decades later. A UCAR radio occultation experiment named GPS/MET changed that. Launched on a single satellite in 1995, GPS/MET demonstrated for the first time that the radio signals already being sent out by existing GPS satellites could be harnessed to record Earth's atmospheric density, a measurement that can be further broken down into information about temperature, humidity, and pressure.

The success of that proof-of-concept experiment fueled interest in launching a constellation of small, relatively inexpensive satellites that could provide similar measurements, but many more of them and over the entire globe. To turn the idea into a reality, UCAR partnered with Taiwan's National Space Organization.

"They really set an example for how a satellite project should be executed," said Ying-Hwa "Bill" Kuo, the longtime director of UCAR's COSMIC Program. "The budget was really tight, but they were very disciplined and were able to complete the project on time and without cost overruns."

Each finished COSMIC satellite looks like an oversized pancake with two flipped up solar panels and weighs about 140 pounds. The budget for COSMIC, including the first two years of operation, was $100 million. Taiwan covered 80 percent of the cost.

In the United States, the leading sponsor of the project is the National Science Foundation (NSF). Other U.S. partners include the National Oceanic and Atmospheric Administration, the Air Force, the Office of Naval Research, and NASA, which developed the radio occultation receivers used on the satellites.

"Unlike most proposed projects where less is achieved than is promised, COSMIC produced much more than proposed and even expected by its proponents," said Jay Fein, who managed COSMIC for NSF when the project was coming together. "Many people and institutions helped to make COSMIC an extraordinary success."

After a successful launch, the data came flooding back from COSMIC. The constellation took more than 2,500 soundings — vertical profiles of the atmosphere — per day globally. Instantly, these high-quality data were provided free of charge in real time to atmospheric researchers and forecasters around the world, who wasted little time taking advantage of them.

“We have been integrating COSMIC-1 data into our numerical weather prediction models since 2007,” said Louis W. Uccellini, director of NOAA’s National Weather Service. “Its unique characteristics of high accuracy and vertical resolution complement other satellite observations used in the models. With the recent upgrade of our supercomputers, we're now able to process more data than ever, including the increased observations expected from COSMIC-2 next year."

At its peak, COSMIC was among the top five observing systems in the world when measured by ability to boost the accuracy of numerical weather predictions, according to studies by the European Centre for Medium-Range Weather Forecasts and other international weather prediction centers.

"COSMIC has conclusively demonstrated the scientific and practical value of radio occultation and established the technique as an essential part of the future global observing system," Anthes said.

Not only has COSMIC provided a huge volume of atmospheric observations, but those observations have also proven to be highly accurate — so much so that COSMIC data have been used over the past decade to uncover and correct instrument bias in other types of satellite observations. These biases arise as satellite sensors that detect microwave and infrared radiation degrade over time due to relentless exposure to the Sun's rays.

Scientists also have found that data collected by COSMIC are especially useful for forecasting tropical cyclones, including typhoons and hurricanes. COSMIC is able to provide critical observations of water vapor, the fuel that drives tropical cyclones, in high vertical resolution, which means scientists can determine how much water is present at what height in the atmosphere.

Other observing systems over the oceans — as well as weather prediction models — often underestimate reservoirs of moisture stored in the lower troposphere, the layer of the atmosphere closest to Earth's surface where tropical cyclones form. COSMIC, on the other hand, provides valuable information to weather prediction models on how much water is available to fuel a forming cyclone.

The upcoming launch of the first phase of COSMIC-2 will increase radio occultation measurements over the tropics, where typhoons and hurricanes are born.

"COSMIC-2 has the potential to revolutionize tropical cyclone forecasts," said Kuo, who is now the director of UCAR Community Programs. "Not only will COSMIC-2 provide more data from the tropics, but the data will be higher quality as well, thanks to an improved antenna on the new satellites."

More than 140 scientists, engineers, and other experts in radio occultation and its use from 20 countries are gathering in Taiwan for an international conference in Taipei from March 9-11 to celebrate the 10th anniversary of the launch. 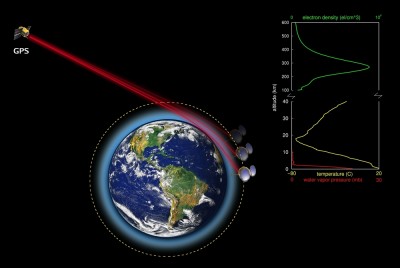 Caption: Receivers on the COSMIC satellites measure the bend and delay of radio signals emitted by GPS satellites to infer information about the atmosphere. 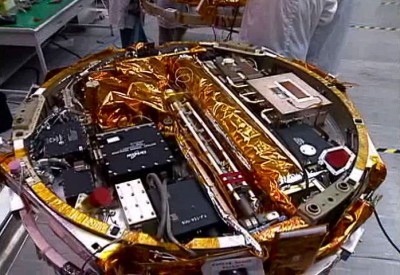 Caption: A COSMIC microsatellite during testing. Just over 6 inches deep, the satellite contains a GPS occultation transmitter, a Tiny Ionospheric Photometer, and a tri-band beacon to relay data to ground stations.