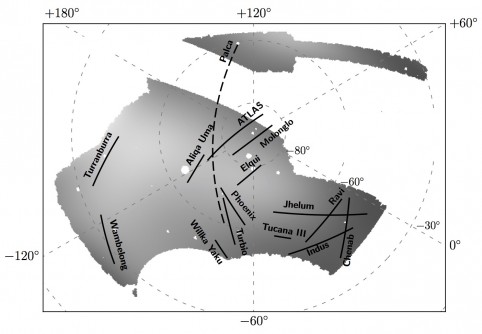 The image shows the full area of sky mapped by the Dark Energy Survey, and the eleven newly discovered stellar streams. Four of the streams in this diagram - ATLAS, Molonglo, Phoenix and Tucana III – were previously known. The others were discovered using the Dark Energy Camera, one of the most powerful astronomical cameras on earth. 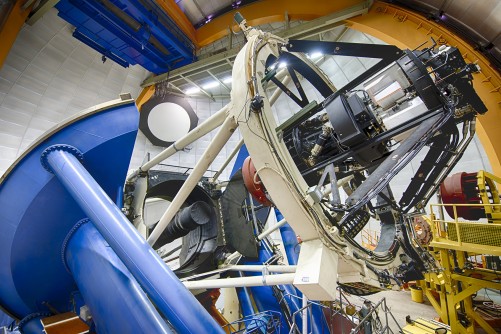 Newswise — Scientists on the Dark Energy Survey (DES), including astronomers from the University of Portsmouth, have today (10 January) released their first three years of data.

This first major release of data from the survey includes information on more than 400 million astronomical objects, including distant galaxies billions of light years away as well as stars in our own galaxy.

DES scientists are using this data to learn more about dark energy, the mysterious force believed to be accelerating the expansion of the universe. The data is now accessible as a ‘digital sky’ to researchers and the public around the world to help bring new scientific applications, challenges, and opportunities for discovery.

Some of the preliminary cosmological findings were presented a in a special session during the American Astronomical Society meeting in Washington, D.C. As part of that session, DES scientists also announced the discovery of a dozen new stellar streams, remnants of smaller galaxies torn apart and devoured by our Milky Way.

Professor Bob Nichol from the University’s Institute of Cosmology and Gravitation is a member of the DES. He said: “This is a proud day for all of us in DES. After a decade of hard work we have produced one of the deepest, largest, and most detailed maps of our Cosmos. It is a pleasure to share this with fellow astronomers and the public so they can participate in the joys of discovery like us.”

The public release of the first three years of DES data follows the tradition of astronomers making their data freely available. Professor Nichol Nichol was part of the Sloan Digital Sky Survey (SDSS) that pioneered such open access to the night sky making projects like Google Sky and Galaxy Zoo (among the most successful online citizen science projects ever undertaken, which involved the University of Portsmouth from the start); engaging millions of people in the wonder of astronomy. DES now follows this heritage.

The data cover the full DES footprint – about 5,000 square degrees, or one eighth of the entire sky – and include more than 100,000 exposures taken with the Dark Energy Camera. The images correspond to hundreds of terabytes of data and are being released along with catalogs of hundreds of millions of galaxies and stars.

“There are all kinds of discoveries waiting to be found in the data,” said Dark Energy Survey Director Josh Frieman of the U.S. Department of Energy’s Fermi National Accelerator Laboratory. “While DES scientists are focused on using it to learn about dark energy, we wanted to enable astronomers to explore these images in new ways, to improve our understanding of the universe.”

The DES data can be accessed online here: https://des.ncsa.illinois.edu/releases/dr1

One new discovery enabled by the data set is the detection of roughly a dozen new streams of stars around our Milky Way. Our home galaxy is surrounded by a massive halo of dark matter, which exerts a powerful gravitational pull on smaller, nearby galaxies. The Milky Way grows by pulling in, ripping apart and absorbing these smaller systems. As stars are torn away, they form streams across the sky that can be detected using the Dark Energy Camera.  Even so, stellar streams are extremely difficult to find since they are composed of relatively few stars spread out over a large area of sky.

These streams teach us about the formation and structure of the Milky Way and its dark matter halo. Stellar streams give us a snapshot of a larger galaxy being built out of smaller ones.

“It’s exciting that we found so many stellar streams,” said astrophysicist Alex Drlica-Wagner of Fermilab, the lead laboratory on the Dark Energy Survey. “We can use these streams to measure the amount, distribution, and clumpiness of dark matter in the Milky Way. Studies of stellar streams will help constrain the fundamental properties of dark matter.”

Prior to the new discoveries by DES, only about two dozen stellar streams had been discovered. Many of them were found by the Sloan Digital Sky Survey, a precursor to the Dark Energy Survey.

DES plans one more major public data release, after the survey is completed.

Read the papers drawn from the first years of DES data online here: https://www.darkenergysurvey.org/dr1-data-release-papers. An animation of several of the newly discovered streams can be seen here: http://home.fnal.gov/~kadrlica/movies/residual_q1_v17p2_label.gif.

The Dark Energy Camera, the primary observation tool of the Dark Energy Survey, is one of the most powerful digital imaging devices in existence. It was built and tested at Fermilab and is mounted on the National Science Foundation’s four-metre Blanco telescope, part of the Cerro Tololo Inter-American Observatory in Chile, a division of the National Optical Astronomy Observatory (NOAO). The DES images are processed at the National Center for Supercomputing Applications (NCSA) at the University of Illinois at Urbana-Champaign.

This work is supported in part by the U.S. Department of Energy Office of Science and the UK Science and Technology Facilities Council (STFC).