David Seidman elected to the National Academy of Engineering 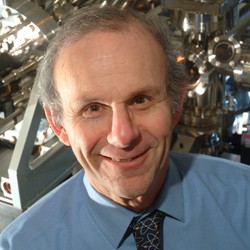 Newswise — EVANSTON - Northwestern University’s David N. Seidman, whose work has led to an improved understanding of materials on the atomic scale, has been elected to the National Academy of Engineering (NAE).

Election to the academy is among the highest professional distinctions accorded to an engineer. Seidman is one of 83 new members and 16 new foreign members announced this week by the NAE.

Seidman was cited for “contributions to understanding of materials at the atomic scale, leading to advanced materials and processes.” He will be formally inducted during a ceremony at the NAE’s annual meeting on Sept. 30 in Washington, D.C.

Seidman is a Walter P. Murphy Professor of Materials Science and Engineering in the McCormick School of Engineering and the founding director of the Northwestern University Center for Atom-Probe Tomography (NUCAPT), the largest atom-probe tomography group in the United States.

NUCAPT’s equipment gives researchers the ability to see the internal structures of materials — on the subnano- to nanoscale — to help them better understand the materials’ properties and how those properties have temporally evolved. This information can be used to improve various materials properties, such as making them lighter and stronger.

“We are tremendously proud to see David recognized at the highest level in his field,” said Julio M. Ottino, dean of the McCormick School. “Since joining Northwestern more than 30 years ago, he has been an example of an outstanding researcher, collaborator and colleague.”

Seidman’s research aims to understand physical phenomena in a wide range of material systems on an atomic scale. His research group uses highly sophisticated microscopy and spectroscopy instrumentation to study interfaces on a subnanoscale level. He uses these tools to develop high-temperature cobalt-based alloys for use as turbine blades in aircrafts and for producing electricity. He also studies aluminum-scandium alloys, nickel-based superalloys and silicon nanowires that are processed in new ways.

Seidman is a fellow of the American Academy of Arts and Sciences, American Association for the Advancement of Science, Materials Research Society, TMS, American Physical Society, International Field-Emission Society, Microscopy Society of America and ASM International.

Founded in 1964, the National Academy of Engineering is a private, independent, nonprofit institution that provides engineering leadership in service to the nation. It has more than 2,000 peer-elected members and foreign associates, senior professionals in business, academia and government, who are among the world’s most accomplished engineers.

-Amanda Morris, writer/editor at the McCormick School of Engineering, is the author of this story.