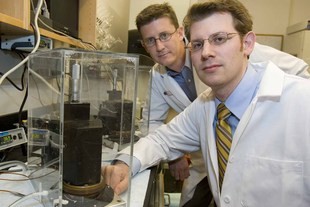 Newswise — A new device invented by researchers at the University of Virginia could save pharmaceutical companies significant time and money in screening potential new drug compounds.

Blackman and Brian Wamhoff, assistant professor in the department of medicine (cardiovascular division), have teamed up to create the novel system, HemoShear 2.0, which offers researchers for the first time the ability to observe the behavior patterns of human vascular cells under a variety of blood flow conditions that occur inside the body's cardiovascular system.

HemoShear 2.0 models the early indicators of atherosclerosis — hardening or narrowing of the arteries — by placing actual human vascular cells (i.e., endothelial and smooth muscle cells) in an environment that mimics an artery with blood flowing through it. Data from the exposure can be measured and recorded.

HemoShear 2.0 can help test the efficacy of therapeutic compounds and aid in early stage toxicity studies. Instead of testing drug compounds on isolated cells, which can produce false negatives, drug companies can use the device to test compounds in a more realistic environment.

"What the pharmaceutical industry lacks is the ability to mimic an organ ex vivo," Wamhoff said. "We know that as soon as we take an organ and disperse the cells, those cells are no longer like they were in the body. If you apply a novel compound to that cell, the response you get might be real but it's not meaningful in the context of the disease. When you go to animal studies, that response may not carry over in the blood vessel. It is clear that human-based biomimetic models are needed to fill this gap"

Atherosclerosis is considered the most important underlying cause of heart attack or stroke. The disease tends to occur at locations in the arteries where blood flow is compromised, causing detrimental changes in both the cells lining the interior of blood vessels (endothelial cells) and the cells found in the wall of blood vessels (smooth muscle cells).

Using an MRI, the researchers determined the rhythmic pattern at which blood flows through different arteries in human subjects. "We are then able to simulate the same flow patterns in those areas that are more or less susceptible to atherosclerosis and observe how the cells respond to these flow patterns in HemoShear," Blackman said.

According to Wamhoff, this kind of modeling offers unique opportunities to observe the cells and their interaction. "Research has been conducted wherein human cells are isolated to observe behavior patterns, but there are no available models that allow one to accurately study the intricate communication between endothelial cells and smooth muscle cells in a setting that mimics actual blood flow in the body."

This communication is important, the researchers say, because the cells lining the interior of the blood vessels, the endothelial cells, recognize different blood flow patterns imposed upon them and respond by expressing or repressing genes. This, in turn, influences their interactions with the cells found in the walls of blood vessels, the smooth muscle cells — interactions that, the researchers found, may lead to the onset of early-inflammation-associated atherosclerosis in certain arteries.

When subjected to atheroprotective blood flow patterns, the endothelial cells aligned with the direction of the blood flow, and the smooth muscle cells aligned perpendicularly to the flow as is true in a healthy blood vessel. In stark contrast, the atheroprone type of flow caused the endothelial cells to move away from their parallel structure while smooth muscle cells moved away from their perpendicular structure. This remodeling mimics the early phases of the diseased state of the artery; the blood flow pattern associated with atheroprone areas resulted in inflammation in both cells reminiscent of early hallmarks of atherosclerosis. This was confirmed through evaluating gene and protein expression profiles in both cell types.

"The results of this study validate the use of this novel co-culture system as a relevant biomimetic vascular model for studying early atherosclerotic events," said Tom Skalak, professor and chair of the U.Va. Department of Biomedical Engineering. "The cells' responses to these carefully controlled models of blood flow can now be used to develop therapeutic interventions for detection and treatment of vascular diseases — it has the potential to be revolutionary."

Blackman,Wamhoff, and Dr. Norbert Leitinger (department of pharmacology) have formed a collaborative entity — the Laboratory of Atherogenesis — to begin using the HemoShear system to make these translatable discoveries in atherosclerosis.

A provisional patent has been filed for HemoShear 2.0. The research that HemoShear 2.0 made possible was spearheaded by a biomedical engineering graduate student, Nicole Hastings ('08), and is published in the American Journal of Physiology — Cell Physiology.

For more information, please visit the Laboratory of Atherogenesis at http://faculty.virginia.edu/labofatherogenesis.