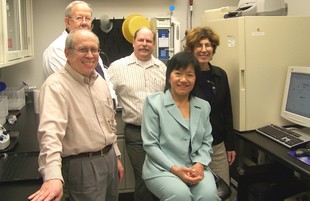 Newswise — A group of 12 proteins associated with pediatric multiple sclerosis (MS) have been discovered for the first time by a team of neurology and pathology researchers at Stony Brook University Medical Center. Led by Lauren Krupp, M.D., Director of the National Pediatric MS Center at SBUMC, the finding could lead to a new panel of diagnostic and prognostic markers in pediatric MS. Their study is reported in the April 2009 issue of the journal Multiple Sclerosis.

Multiple Sclerosis is an inflammatory autoimmune disease of the central nervous system (CNS) which usually affects young adults. It is the most disabling chronic disorder of this age group, affecting more than 400,000 in the United States. In some instances, children can be affected. Diagnosing MS in children and adolescents is difficult, and standard MS diagnostic tests such as cerebral spinal fluid (CSF) analysis and magnetic resonance imaging (MRI) are often unreliable.

"This is the first study of its kind in children with MS that has the potential to advance progress in the diagnosis and estimation of the prognosis of all individuals affected by this disease," says Dr. Krupp, noting the potential of the method as an early disease-specific marker.

"Proteomics is just being applied to the study of MS," explains Dr. Krupp. "Because children develop MS so early with respect to potential environmental exposures, it is possible that determining the mechanism of action in MS of the identified proteins will elucidate further the pathogenesis of the disease."

In "Protein expression profiles in pediatric multiple sclerosis: potential biomarkers," the authors detail the proteomic analysis method. They used two-dimensional gel electrophoresis (2-DE) in combination with mass spectrometry to identify the proteins that were significantly expressed in pediatric MS group. This analysis was completed through the Proteomics Center at Stony Brook University.

The study was limited to children who met the international consensus definition of pediatric MS. All nine MS patients were girls age 14 to 17 years. They were matched to controls of healthy girls within the same age range.

According to the researchers, a larger number of subjects are needed to further validate their study findings. They believe their findings provide a significant basis for large studies to confirm and validate biomarker suitability in the blood. They will pursue such studies with the ultimate aim of identifying MS biomarkers that lead to the development of rapid, easy-to-use, widely available, and inexpensive MS diagnostic tests.

The Stony Brook pediatric MS proteomic research was supported, in part, with funding to Dr. Krupp from the Montel Williams MS Foundation and the National Multiple Sclerosis Society grant to the National Pediatric MS Center and National Center for Research Resources. Co-investigator Noy Rithidech, Ph.D., of the Department of Pathology, also received grants to complete the research from the Office of the Vice President for Research and the Office of Scientific Affairs at Stony Brook University, and NASA.

About The Proteomics Center at Stony Brook University

The Proteomics Center at Stony Brook University is supported by the School of Medicine and serves as a core facility for SBU researchers, as well as outside investigators. The Center houses specialized mass spectrometers to study protein-protein interactions, protein modifications, and global proteome changes. As a result, the Center contributes to cutting-edge scientific research such as the discovery of new biomarkers for human diseases and stem cell biology.

The National Pediatric MS Center at SBUMC was established to advance the recognition, evaluation, and treatment of pediatric MS through the creation of a multidisciplinary program dedicated to clinical care and scientific research of children and adolescents with MS. The Center includes a multidisciplinary team of experts in MS, pediatric neurology, nursing psychiatry, and neuropsychology. Funded in part by the National Multiple Sclerosis Society, the Center has been designated as a Center of Excellence by the Society.