Diversity Among Parasitic Wasps Is Even Greater than Suspected 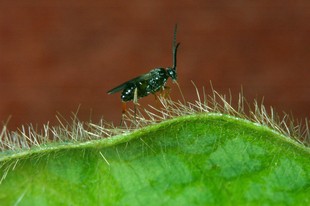 A new study of a tiny wasp that lays its eggs inside caterpillars reveals that the extraordinary diversity of this family of wasps is even higher than reported. 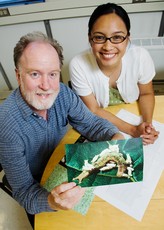 U. of I. entomology professor Charles Whitfield and doctoral student Josephine Rodriguez led the taxonomic part of a multi-disciplinary study of microgastrine wasps. 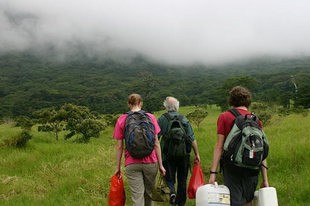 University of Pennsylvania ecologists Daniel Janzen and Winnie Hallwachs have spent three decades on an ecological inventory of Area de Conservación Guanacaste, Costa Rica, where the wasps and their caterpillar hosts were collected. Janzen (center) leads a collecting team.

Newswise — A tiny wasp that lays its eggs under the skin of unwitting caterpillars belongs to one of the most diverse groups of insects on Earth. Now researchers report that its diversity is even higher than previously thought.

By combining ecological and genetic data with the painstaking detective work of taxonomy, the researchers have dramatically increased " nearly doubling " the estimated number of species reported of six very species-rich genera of parasitoid wasps.

The subfamily to which these wasps belong, Microgastrinae, gets its name from its tiny abdomen. The wasp itself is quite small, about the size of the lead at the tip of a pencil.

All of the wasps were reared from caterpillars collected in Area de ConservaciÃ³n Guanacaste (ACG), a biological reserve in northwestern Costa Rica. A decades-long ecological inventory of the area conducted by University of Pennsylvania ecologists Daniel Janzen and Winnie Hallwachs revealed that the wasps are extraordinarily specific to the caterpillar hosts they attack. More than 90 percent of the wasp species were found to target only one or a very few species of caterpillar, out of more than 3,500 caterpillar species sampled in ACG.

But the DNA barcoding also revealed that some wasps that looked alike and were once thought to belong to a single species were actually several different species, each of which preyed on only one or two species of caterpillar hosts.

"The most extreme case of overlooked diversity is the morphospecies Apanteles leucostigmus," the authors wrote. Barcoding revealed that instead of being a single species that preyed on 32 different species of related caterpillars, as was previously thought, the wasps formerly classified as A. leucostigmus could be grouped into 36 provisional species, "each attacking one or a very few closely related species of caterpillars."

"One of the messages of this paper is that you really need all of these different kinds of data in order to tell the species apart " that just using the morphology alone, or the genetic data or the ecological information alone isn't enough," said University of Illinois entomology professor James Whitfield, who led the taxonomic study. "However, once the species are distinguished, anyone can use the DNA barcode to rapidly and accurately identify one of them."

"This represents microgastrine wasps reared from approximately 3,500 caterpillar species in ACG," said Josephine Rodriguez, a doctoral student and microgastrine expert in Whitfield's lab. "Since there are an estimated 10,000 species of caterpillars there, including many unsampled ones that mine inside leaves or live in fungi, this is just the tip of the microgastrine iceberg."

Whitfield credits Rodriguez, an avowed microgastrine enthusiast, with pushing the research forward in a way that helped integrate the work of three very different laboratories. She and two assistants processed more than 5,000 specimens from the ACG ecological study and shipped them to the Biodiversity Institute of Ontario at the University of Guelph for barcoding. She also worked with Whitfield and fellow former graduate student Andy Deans, who is now on the faculty at North Carolina State University, to independently identify the species based on their morphological traits.

M. Alex Smith and Paul Hebert at the Biodiversity Institute of Ontario conducted the barcoding analysis, which compared the sequence of nucleotides that spell out the barcode region of the cytochrome c oxidase 1 gene in every specimen. Significant differences between the sequences indicated that the specimens belonged to different species if those differences correlated with other morphological and/or ecological traits. In cases where the genetic data were murky, the researchers also analyzed other genes and again compared their results to the ecological and morphological data.

The new analysis, which appeared online this month in the Proceedings of the National Academy of Sciences, sheds new light on a group of insects that are already astounding in their diversity, Whitfield said.

"The family Braconidae, to which the microgastrines belong, has about 15,000 described species in the world, and it's been estimated to have 50 to 60,000 species, about the same as all vertebrates " all fish, mammals, amphibians, reptiles, birds " which is a lot!" Whitfield said. "And what we're saying is that if anything we're underestimating how many more there are."

To see an audio slide show on the research, please go to: http://publicaffairs.illinois.edu/slideshows/Microgastrine.