Do You Know Your HIV Status? 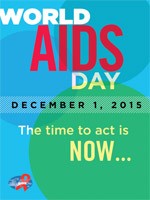 World AIDS Day is once a year - Loyola offers free HIV testing to all emergency department patients every day.

Newswise — According to the Centers for Disease Control and Prevention (CDC), of the 1.2 million Americans living with AIDS, one in eight do not know they are infected. To raise awareness for the importance of this potentially deadly infectious disease, December 1 is World AIDS Day.

All patients between the ages of 18 and 64 who come to the Loyola University Health System (LUHS) Emergency Department in Maywood are offered an HIV test. In 2013, the U.S. Preventative Services Task Force gave a level A recommendation to screen for HIV in adolescents and adults, understanding the importance of early identification of infection and the role that the Emergency Department can provide in the process. Under the Affordable Care Act, HIV testing is usually paid for by patient insurance.

“More than 7,000 patients have been screened for HIV at Loyola since starting the program in January, 2014,” says Jerry Goldstein, MPH, research coordinator, LUHS. “Loyola nurses and medical assistants have made routine HIV screening the standard of care at Loyola, helping to make patients aware of their status, and reducing the stigma still associated with HIV. On World AIDS Day 2015, Loyola is doing its part to reduce the rate of HIV and improve the quality of life for all of their patients by offering this test.”

Older Americans are more likely than younger Americans to be diagnosed with HIV infection late in the course of their disease, which may mean a later start to treatment, possibly causing more damage to their immune system. This can lead to poorer prognoses and shorter HIV-to-AIDS intervals.

“With all of the medicines available to treat HIV, most patients live long and meaningful lives. However, there are still many people who don’t know their HIV status so there is still work to be done,” says Goldstein. Patients who are diagnosed with HIV are referred to Loyola’s HIV clinic for treatment. The HIV clinic has been treating patients at Loyola for more than two decades.

The Student Training in Approach to Research program at Loyola University Chicago Stritch School of Medicine originally supported the initial pilot with free HIV testing at Loyola in 2011. The program was expanded with funding from the CDC Care and Prevention in the United States (CAPUS) grant in collaboration with the Illinois Department of Public Health (IDPH) and the Public Health Institute of Metropolitan Chicago. Training and support for the grant has been provided by the Midwest AIDS+Education Training Center.

Loyola University Health System is recognized internationally as a leader in infection control and prevention. Loyola is one of a few select hospitals who invest in universal screening of all inpatients for MRSA. Loyola was one of the first institutions to require all staff to have mandatory flu shots as a condition of employment. Loyola was the only academic hospital to participate in a national C. difficile study and performs the most accurate testing for bacteria. Loyola also actively screens emergency department patients for HIV/AIDS.