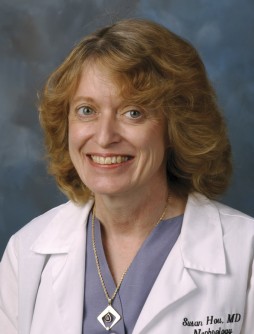 Newswise — MAYWOOD, IL – Susan Hou, MD, who altruistically donated a kidney to one of her patients and later became a recipient of a lung transplant, is among the transplant patients who will be honored April 21 during Loyola University Medical Center’s 25th annual Candle-lighting Ceremony.

The media are invited to attend the ceremony Thursday at 4 pm at Loyola’s Paul V. Galvin Memorial Chapel, 2160 S. First Ave., Maywood. Please park in the parking lot on the north side of campus. A media relations representative will meet you at the north door and show you to the chapel.

In 2002, Dr. Hou donated a kidney to one of her patients, a mother of two, who suffered kidney failure as a result of polycystic kidney disease. Twelve years to the day later, Dr. Hou became an organ transplant patient, receiving a donated lung to treat a life-threatening pulmonary disease that was unrelated to her kidney donation.

Dr. Hou is believed to be the only transplant physician in history both to donate an organ and receive an organ transplant, according to the United Network for Organ Sharing.

“Some people know they just have to do it, and I was one of them,” said Dr. Hou, who felt destined to be an organ donor. “If you believe in the brotherhood of man, there are no unrelated donors.”

The ceremony also will recognize three other remarkable organ donor patients. • Heart transplant patient Donna Stout and double lung transplant patient Cassie Stanley received their organs from the same donor. Together they have given dozens of talks to high schools and other venues to raise awareness for organ awareness. In 2007, Ms. Stout received a transplant after experiencing sudden heart failure at the relatively young age of 49. Her donor heart has functioned well ever since. “If it weren’t for my donor, I would never have seen my daughter graduate from college and get married,” she said.• Ms. Stanley was born with cystic fibrosis, a life-threatening disease that causes a buildup of thick mucus in the lungs. Her double-lung transplant saved her life in 2007. Those donor lungs eventually were rejected, so Ms. Stanley underwent a second double-lung transplant in 2012. “These lungs are working perfectly fine,” Ms. Stanley said. • Ted Sulkowski vividly remembers the night he was notified that organs had become available for a liver-kidney transplant. “It was the call of a lifetime,” he said. “You never forget that moment. That night my wife and I lay in bed and prayed for the donor family.” Watch Ted's story here.

In the ceremony, patients who have received organ donations, or are waiting for a transplant, light candles from the “Candle of Life” in memory of and thanksgiving for those who have given life to others through organ donation. The lit candles represent the life that each one of us carries.

Now that Dr. Hou has her health back, she has resumed working with a free clinic in Bolivia that she co-founded. The clinic serves more than 3,000 patients a year.

“I worry whether the lung should have gone to someone younger,” said Dr. Hou, who was 68 at the time of the transplant. “So I feel a great pressure to make the most of the extra years I have been given.”