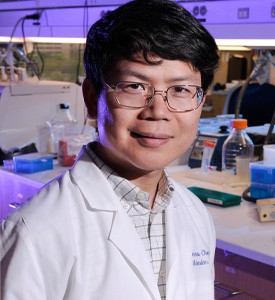 Being elected to the NAS is one of the highest honors in American science, and with Dr. Chen’s election, UT Southwestern now has 21 NAS members on its faculty. This number gives UT Southwestern the distinction of being among the group of academic medical centers with the most NAS members. “I’m thrilled to receive this great honor from the National Academy of Sciences,” Dr. Chen said. “This honor belongs to all the people in our laboratory who have contributed to the work that is recognized by the academy. I’m fortunate to work with such talented people and feel privileged to have received strong support from UT Southwestern.” Dr. Daniel K. Podolsky, president of UT Southwestern, said, “James Chen is an outstanding scientist, teacher, and colleague, whose achievements include several important advances in our understanding innate immunity – the body’s first, generalized response to infection. His recent discoveries have provided profound new insights into cellular responses to viral infection and may pave the way for much needed, more effective treatments. He is a valued member of our faculty, and we are very proud that his peers have recognized him with election to the National Academy of Sciences.” The NAS is a private, non-profit society of distinguished scholars. Established by Congress in 1863, the NAS is charged with providing independent, objective advice to the nation on matters related to science and technology. Scientists are elected to the NAS by their peers, based on outstanding contributions to research. Dr. Eric Olson, chairman of molecular biology and an NAS member since 2000, said, “James has been a pioneer in deciphering the mechanisms of cell signaling, inflammation, and innate immunity. By reconstituting these complex processes in a test tube, his work has revolutionized our understanding of fundamental cellular mechanisms of disease and has revealed new targets for drug development to fight infection by common viruses such as hepatitis C, West Nile, and influenza.” Dr. Chen’s accomplishments are considered important for understanding the fundamental mechanisms of cancer and immunity. Early in his career, he uncovered a new, unexpected role for ubiquitin, a small protein, showing that it activates other proteins important to growth regulation and other essential cellular functions. In other work, Dr. Chen found that the cell’s energy-producing bodies, the mitochondria, contribute to the body’s immune response, and he identified MAVS, the first beneficial prion found in humans. MAVS proteins, located on the mitochondria, function in an innate immune pathway that defends against viruses by misfolding and causing nearby proteins to misfold in a domino effect. Whereas other prions can cause deadly brain-wasting diseases as infectious proteins, Dr. Chen showed that MAVS use the mechanism as a force for good by helping the cell quickly amplify its immune response to invasion by pathogens. Dr. Chen is also a member of UT Southwestern’s Center for the Genetics of Host Defense, collaborating with Dr. Bruce Beutler, who shared the 2011 Nobel Prize in Physiology or Medicine for his own groundbreaking work in innate immunity. “In the effort to understand how viruses and other microbes are detected by the immune system once they get inside our cells, James has dominated the field.  He is an immunologist and a biochemist of the very top echelon. In fact, he really has no peers,” said Dr. Beutler, who directs the Center. A UT Southwestern faculty member since 1997, Dr. Chen grew up in a village in southern China and earned his undergraduate degree in biology at Fujian Normal University. By placing first in a biochemistry exam, he received an overseas scholarship that took him to the State University of New York at Buffalo, where he earned a Ph.D. Dr. Chen received the Norman Hackerman Award in Chemical Research from the Robert A. Welch Foundation in 2005 and the Edith and Peter O’Donnell Award in Science from the Academy of Medicine, Engineering and Science of Texas in 2007. In 2012, the NAS honored Dr. Chen with its Award in Molecular Biology, which recognizes “a recent notable discovery in molecular biology” by an American scientist under age 45. In all, the NAS announced the election of 84 new members and 21 foreign associates from 15 countries in recognition of their distinguished and continuing achievements in original research. Dr. Chen joins two other scientists from Texas institutions who were elected this year. The election of new NAS members was announced during the 151st annual meeting of the academy in Washington, D.C. Other UT Southwestern faculty who are members of the NAS and the years they were elected are: Dr. Michael Brown, 1980; Dr. Joseph Goldstein, 1980; Dr. Jean Wilson, 1983; Dr. Jonathan Uhr, 1984; Dr. Alfred Gilman, 1985; Dr. Roger Unger, 1986; Dr. Steven McKnight, 1992; Dr. Ellen Vitetta, 1994; Dr. Johann Deisenhofer, 1997; Dr. Eric Olson, 2000; Dr. Thomas Südhof (now adjunct), 2002; Dr. Joseph Takahashi, 2003; Dr. Masashi Yanagisawa, 2003; Dr. Melanie Cobb, 2006; Dr. David Russell, 2006; Dr. Helen Hobbs, 2007; Dr. Bruce Beutler, 2008; Dr. David Mangelsdorf, 2008; Dr. Luis Parada, 2011; and Dr. Beth Levine, 2013.