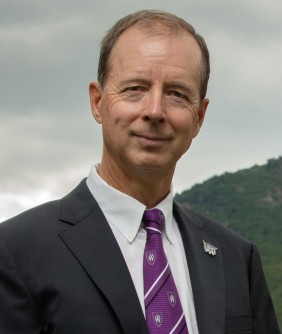 Newswise — ADELPHI, MD---The University System of Maryland (USM) Board of Regents has appointed Charles Wight president of Salisbury University (SU), beginning July 1, 2018. Wight will succeed Janet Dudley-Eshbach, who announced last fall her plans to step down from the position after 18 years.

Wight has served since 2013 as president of Weber State University (WSU) in Ogden, Utah, a public regional institution of higher education with 28,000 students. At Weber State, he pursued five priorities:  college affordability; diversity and inclusion; maintaining a beautiful and diverse campus; improving student success; and building mutually positive relationships with the host community.

“On behalf of the Board of Regents, I’m delighted that Charles Wight is bringing his breadth of experience to lead Salisbury University as its next president,” said USM Board of Regents Chair James Brady.  “His list of accomplishments at Weber State University reflects a visionary style that helped his institution attain the kinds of successes that align with current priorities at Salisbury. We look forward to having Dr. Wight become a part of the USM family.”

During his five years as Weber State’s president, the university achieved significant progress.  Wight led a $164 million fundraising campaign that exceeded the original goal by $39 million. Need-based financial aid was expanded to make the university more accessible to students from modest means.  He created the school’s first LGBT Resource Center, named its first chief diversity officer and opened a Community Education Center in downtown Ogden to guide students of color through the application and financial aid processes.

The campus also expanded under Wight’s leadership. Student enrollment grew by 5.3%, while more than $150 million in state, private and institutional funding supported the construction or renovation of eight new buildings for science, business, social science, library, student recreation and residence, health and engineering. And under his guidance, Weber State boasts the fastest growing computer science and engineering programs in Utah.

Despite this growth, Weber State’s campus became more sustainable during Wight’s tenure through the implementation of conservation programs that save $2 million per year on fuel, power and water.

“I am both honored and delighted by the opportunity to serve as president of Salisbury University,” Wight said. “It’s a great institution, and I’m looking forward to joining the team in July.”

Wight is known across Weber State’s campus as “Chuck.”  A professor of chemistry and an expert in chemical explosions, he demonstrates his commitment to undergraduate education by teaching an Honors General Chemistry course every spring semester. He is also known for conducting science demonstrations at campus events.

Wight’s research interests focus on physical chemistry, the chemistry of explosives and propellants, and the kinetics of solid state reactions and thermal analysis.  He has also been deeply involved in the development of online learning tools for general chemistry and college readiness in mathematics.

Wight is the author or co-author of more than 170 academic papers.  He has continued his research throughout his time as an administrator, contributing to seven papers published in academic journals during his time as Weber State’s president.

As president of a university located in a former railroad town, Wight was deeply involved with the local community.  He served on nine non-profit boards, including the Ogden-Weber Chamber of Commerce, the Salt Lake Chamber of Commerce, the Economic Development Corporation of Utah, the Utah Technology Council, and the Coalition of Urban and Metropolitan Universities.

Wight is married to Victoria Rasmussen and is the father of three grown daughters. In his free time, he enjoys running, backpacking, learning to play golf, and serving as a volunteer pilot for Angel Flight West, a nonprofit charity providing free non-emergency medical transportation for patients with compelling needs.

Wight was named by the Board of Regents from small pool of finalists recommended by a search and screening committee. The group was led by Regent D’Ana Johnson and included representatives from Salisbury University faculty, staff, students, and alumni, and from the greater community.

Home to more than 8,700 students from across the U.S. and around the world, Salisbury University has a reputation for excellence in public higher education. Students may choose from 60 undergraduate majors, master’s degrees and doctoral programs.  A creative curriculum emphasizes undergraduate research, study abroad, professional internships and community engagement. SU consistently ranks among the nation’s top colleges and best values according to The Princeton Review, U.S. News & World Report, Kiplinger’s and others. Sea Gull athletics teams have earned 20 NCAA Division III national championships. The beautiful 200-acre campus, a national arboretum, is located on Maryland’s Eastern Shore, just 30 miles from Atlantic beaches and a few hours from Baltimore and Washington, D.C.  For more information, visit www.salisbury.edu.

The USM is the state’s public higher education system. USM’s 12 institutions, two regional higher education centers, and system office work closely together to leverage their collective expertise and resources, share best practices, increase the system’s effectiveness and efficiency, and advance USM’s mission to improve the quality of life in Maryland.

1.    What attracted you to SU and Maryland’s Eastern Shore?

I grew up in northern Virginia, and my father and sister and their spouses live in Deale, MD (on the western shore of the Chesapeake Bay). So, this move brings me closer to both family and home. But the thing that sealed the deal for me is the fact that SU students and graduates are so highly successful.

2.    Why have you pursued a career in higher education and administration?

Teaching students has always been exciting for me, but I moved into administration to be able to make a positive difference in the lives of a larger number of students. It’s all about scale.

3.    Sounds like your field of study is quite explosive!  Can you tell us a bit about your research and how it helps you as a university president?

The chemistry of explosives and rocket propellants is enormously complex, but we were inspired by a couple of high-profile accidents to see if we could develop simplified computational models that could simulate large explosions and lead to improved safety of transporting and handling large quantities of energetic materials. The papers we published recently were wrapping up research done by students at the University of Utah, and that is now completed as far as my involvement is concerned.

4.    How do you balance the demands of being a university president and teaching an undergraduate class?

Teaching is why I got involved in the higher education business in the first place. I still love it, and it keeps me better grounded in what our faculty are doing and experiencing every day.

Of course! The costs of higher ed borne by students have risen dramatically as many states have disinvested from public institutions. But the value of a college education remains very high, both in terms of professional training and learning to become a civically engaged citizen. It is important that we work to ensure that college remains accessible to everyone by keeping costs low, by maintaining robust financial aid programs, and by ensuring that our campus climate is welcoming and inclusive.

6.    How would you describe your management or leadership style?

Whenever practical, I try to lead by setting direction at a high level and empowering people to implement their own strategies. A long time ago, someone asked me a similar question, and I responded, “My definition of staff excellence is when someone brings me the solution to a problem I didn’t know I had yet.”

7.    If you were a student at SU, what would you hope your educational experience would be like?

I love the fact that SU is a residential university, and students can be fully immersed in their college experience. Years from now, SU graduates will look back on this time as the best years of their lives.

8.    Technology has impacted higher education in a myriad of ways. What do you see as the pluses and minuses?

For some people, the traditional classroom lecture best fits their style of learning, and for others the best way to learn is individually online. However, I’m convinced that a mixture of these represents the sweet spot in higher education. We all have access to unprecedented amounts of data and information through computers and mobile devices, but the greatest value that we can provide students is by teaching them how to cut through the clutter and connect the dots to seek truth and understanding.

9.    What can you tell us about your wife and family?

Victoria Rasmussen and I will celebrate our tenth anniversary next month. She is also an educator, and she spent many years assisting faculty and K-12 teachers to incorporate technology into their teaching practices. Although she has committed a lot of time to supporting me as president at Weber State, Victoria has maintained her commitment to educating with tutoring and in serving on boards in the community. We don’t have any children of our own, but I have three grown daughters from my first marriage, and three grandchildren.

10.    Is there a recent book you read that made a lasting impression on you, from a professional standpoint?  A book you read for fun that you particularly enjoyed? Do you have a favorite author?

I wouldn’t say that I have a favorite author, but I’m pretty sure that I’ve read everything that Malcolm Gladwell and Dick Francis ever wrote. Right now, I’m reading "The Wizard and the Prophet" by my cousin, Charles Mann. Two books that made me think a lot were Einstein’s "Relativity" and the late Stephen Hawking’s "A Brief History of Time."

I haven’t seen a movie for ages, but I love to go flying in my 1976 Bellanca Super Viking, either for fun or on a mission for Angel Flight West. Moving to the Eastern Shore, though, might prompt me to trade in the airplane for a boat!

12.    What do you most enjoy about being a university administrator?

Being a president is mostly about cultivating relationships, getting people excited about supporting students through their journey, and celebrating their many successes along the way. That puts a smile on my face almost every day.

Remembering the thousands of names and faces. Some people have brains that are wired for this, but unfortunately, it’s more challenging for me. I’m getting better at it, but I still must work hard and get plenty of help.

Interacting with students has always been the most fun part of the job. A couple of years ago, a student in my class suddenly exclaimed, “I just realized this class isn’t about memorizing formulas and equations. This class is about how the world works!”  That was a big win.