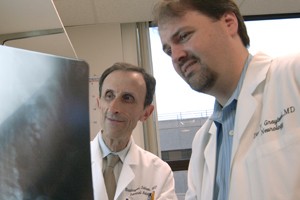 A study " the largest cross-sectional examination of how the long-term use of topiramate affects kidney-stone formation " appears in the October issue of the American Journal of Kidney Diseases.

Several case reports have described an association between topiramate and the development of kidney stones, but this complication had not been well recognized and physicians have not informed patients about the risk, the UT Southwestern researchers said. More important, the mechanism of stone formation was largely unknown previously.

"The wide-spread and escalating use of topiramate emphasizes the importance of considering the long-term impact of this drug on kidney-stone formation," said Dr. Khashayar Sakhaee, senior author of the study and chief of mineral metabolism at UT Southwestern.

More than 29 million Americans suffer from migraines, with women being affected three times more often than men, according to the National Headache Foundation.

"Topiramate is probably one of the most commonly prescribed and most effective neurological medications right now," said Dr. Dion Graybeal, assistant professor of neurology and an author of the study.

Dr. Graybeal and other researchers at UT Southwestern say the next step is to develop a way to block the development of kidney stones for users.

The study comprised two phases. Thirty-two individuals already being treated with topiramate and 50 normal volunteers were enrolled in a cross-sectional study in which their blood and urine were tested for kidney-stone risk. A short-term study also was conducted in seven individuals to assess stone risk before and three months after taking topiramate. All patients were evaluated at UT Southwestern's General Clinical Research Center.

Researchers found that taking topiramate on a long-term basis, or for about one year, caused systemic metabolic acidosis " a buildup of excessive acid in the blood " as a result of the inability of the kidney to excrete acid. Topiramate use also increased the urine pH and lowered urine citrate, an important inhibitor of kidney-stone formation.

In the short-term study, urinary calcium and oxalate " a chemical compound that binds strongly with calcium and is found in most calcium stones " did not significantly change in people taking topiramate.

Kidney stones are solid deposits that form in the kidneys from substances excreted in the urine. When waste materials in urine do not dissolve completely, microscopic particles begin to form and, over time, grow into kidney stones.

Before this study, the rate of kidney-stone formation with topiramate was reported as 1.5 percent. The low incidence rate may be an underestimation due to the short length of observation and the lack of ongoing kidney-stone surveillance and data collection for this drug, said Dr. Sakhaee, holder of the BeautiControl Cosmetics Inc. Professorship in Mineral Metabolism and Osteoporosis.

"There is a legitimate concern for the occurrence of kidney stones with long-term topiramate treatment," said Dr. Sakhaee said. "Studies are needed to explore optimal measures to prevent kidney-stone formation with topiramate use."