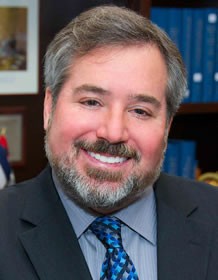 Newswise — CLEVELAND—An urgent need to respond with force to the Islamic State of Iraq and Syria (ISIS) has permanently changed the use of self-defense in international law to attack a threat in another country, according to newly published research from the Case Western Reserve University School of Law.

The use of force against al-Qaida and ISIS during the past 14 years has given rise to what Michael Scharf, co-dean of the Case Western Reserve School of Law, describes as a “Grotian Moment”—a fundamental paradigm shift that will have broad implications for international law.

The main implication of this newly accepted change in the international law of self-defense is that any nation can now lawfully use force against a threat (terrorists, rebels, pirates, drug cartels, etc.) in another country if that nation is unable or unwilling to suppress the threat within its borders.

Scharf, a former attorney adviser for United Nations Affairs for the U.S. Department of State, is Joseph C. Hostetler-Baker Hostetler Professor of Law and director of the law school’s Frederick K. Cox International Law Center. He details the radical change in customary international law in his article, “How the War Against ISIS Changed International Law,” for Case Western Reserve Journal of International Law, Vol. 48 (2016).

The U.S. State Department maintains a list of terrorist organizations that pose a significant threat to the United States and its allies. The list, according to Scharf’s article, includes 58 terrorist groups based in 35 countries.

Since August 2014, the United States—assisted by some Western and Arab countries—has carried out bombing and cruise missile attacks against ISIS targets in Iraq and Syria. Iraq consented to the air strikes in its territory, but Syria didn’t. And Russia blocked the United Nations Security Council from authorizing force against ISIS in Syria.

The United States invoked several legal arguments to justify airstrikes against ISIS in Syria, including: the right of humanitarian intervention, the right to use force in a failed state and the right of hot pursuit, before finally settling on self-defense, Scharf wrote.

Even in the aftermath of al Qaeda attacks in the United States, use of force in self-defense had not been viewed as lawful against terrorists within a sovereign nation unless the terrorist organization was under the effective control of that nation. But the United States argued such force can be justified where a governing authority is unable or unwilling to suppress the threat operating within its borders.

That view was not initially accepted by Russia, China or even the United Kingdom—a close U.S. ally. But opposition changed in the aftermath of ISIS attacks of a Russian jetliner and a Paris stadium and concert hall in 2015, leading to the unanimous adoption of a U.N. Security Council resolution calling on nations to use all necessary measures to fight ISIS in Syria.

U.N. Security Council Resolution 2249, adopted in November 2015, does not clearly endorse a particular legal justification, Scharf wrote. He added: “Despite its ambiguity, Resolution 2249 will likely be viewed as confirming that use of force in self-defense is now permissible against non-state actors where the territorial state is unable to suppress the threat that they pose.”

Scharf’s emphasizes use force remains subject to three key limitations to guard against abuse:• The military response must be to an armed attack to trigger the right to use force in self-defense. Mass terrorist attacks that result in deaths meet that threshold.• The use of force must be targeted against a terrorist organization and not against the nation where the terrorist group exists, or that nation’s military, unless the nation is shown to be effectively in control of the offending group.• Military action must still meet the international law principles of necessity, proportionality and discrimination.Scharf’s research paper also offered that further limitations are likely to develop as nations invoke the new aspect of international law.