Engineering dean gets creative with his LEGO city

Newswise — In pictures it looks like a real city in still-life.

Inside a street-side sushi bar, residents enjoy California rolls while off-duty staff scarf down hot dogs in the alley just outside. In pictures, it looks like a real city in still-life.

A small girl scowls at the concrete, staring at the melting ice cream she just dropped from her empty cone.

A navy sailor returns home from deployment and walks into the bustling union station. Behind him, a diesel engine roars by a crowd of waiting travelers.

In reality, it’s a 75-square-foot custom LEGO city on a table.

Dennis Livesay, dean of the College of Engineering, has constructed the city in his basement during the last six years. Most of it is his own creation.

“I focus a lot on telling little stories, creating the city I want to live in. In my head, everything has a backstory that you wouldn’t know unless you talked to me and had me explain it,” Dennis said.

The city has a long history stemming from his childhood.

“I played LEGOs as a kid, and at that point, I was collecting ‘Star Wars’ LEGOs, so I had that in the back of my mind,” Dennis said.

Dennis and his wife, Lauren Beastall, went to Balboa Park, California in 1998. There they visited the train museum which had a LEGO city much like what he has now. That city helped Dennis envision his own, which he began constructing in 2013.

A third of his city today is comprised of purchased sets. The other two-thirds of the city are what Dennis and other LEGO enthusiasts call “MOCs,” short for “my own creations.”

All of the buildings have their own flavor. Dennis is proud of his newest addition, the city’s early 20th-century union station.

The station contains a travel agent, which Dennis admits is quaint today.

“I think about buildings and the way they evolve. Union Station was built at the turn of the century – probably post-World War I or pre-World War II – and has evolved.”

The trains themselves are far less common today than when the station was built, so the station now houses a museum for them. Like many real-life stations, it has changed continuously over the last hundred years.

The main boulevard is Dennis’ biggest source of pride in the city. He wanted it to be lush and idyllic.

The city hall lies at the end of the boulevard, and at its front steps, Dennis placed minifigures representing his wife, his son and himself. He’s holding a Diet Coke, his favorite drink.

The city wouldn’t feel alive without an active population. It’s filled with stories and diverse characters represented through the minifigures and their careful poses.

One minifigure marching down the street has an afro hairstyle and a disco suit; which Dennis likens to Disco Stew from “The Simpsons.”

“I think that’s actually a woman, so she’s Disco Stella or something,” Dennis said.

One of the most obscure references in the city is a dark-haired minifigure in pajamas, sitting in a wheelchair, staring out of his second-floor window with a spyglass. It’s a little hard to see through the tinted glass.

“He breaks his leg and someone buys him a pair of binoculars so he can keep himself occupied. He sees a crime occurring outside of his rear window, so that’s my ‘Rear Window’ homage.”

Below Jimmy Stewart, Santa Claus sits in a couch with a TV remote in hand. Santa can relax … it’s not Christmas time yet.

Dennis strives to make his city diverse, but due to the lack of diversity in minifigures it can be a struggle. Most of them bear the original, neutral LEGO yellow.

“It was an issue for Lando Calrissian – how are they going to do it for ‘Star Wars?’” Dennis said. “When they created the dark-skinned Lando figure, they also starting creating some figures with a pale, Caucasian flesh tone to distinguish race. There’s not a lot, but I’ve added as much racial diversity as I can.”

Lando Calrissian from “Star Wars” holds the honor of being the first dark-skinned LEGO minifigure. Who knew?

When Dennis pointed out two women sitting on a park bench, he proved that LEGO diversity isn’t limited to the color of the minifigure. They’re one of several homosexual couples living in the city.

The city is constantly evolving.

In a separate room, Dennis has a workstation on which he has a few initial design elements for a building to be built. It’s currently only a single wall with a window, but the style is already distinct from other buildings in his city.

“To me this is a way of expressing creativity. It’s very cathartic. And, most importantly, it’s something that I really enjoy,” Dennis said. 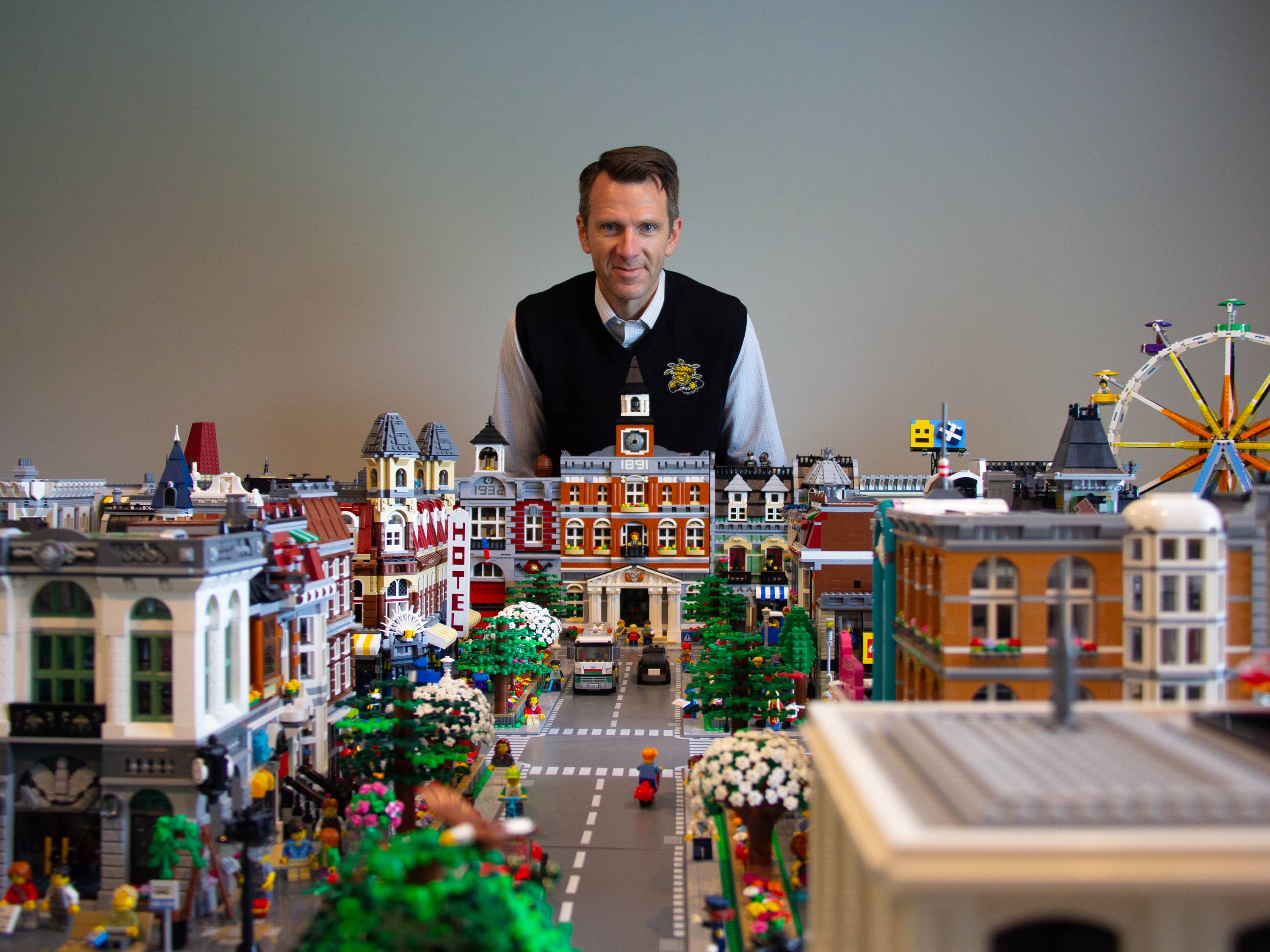 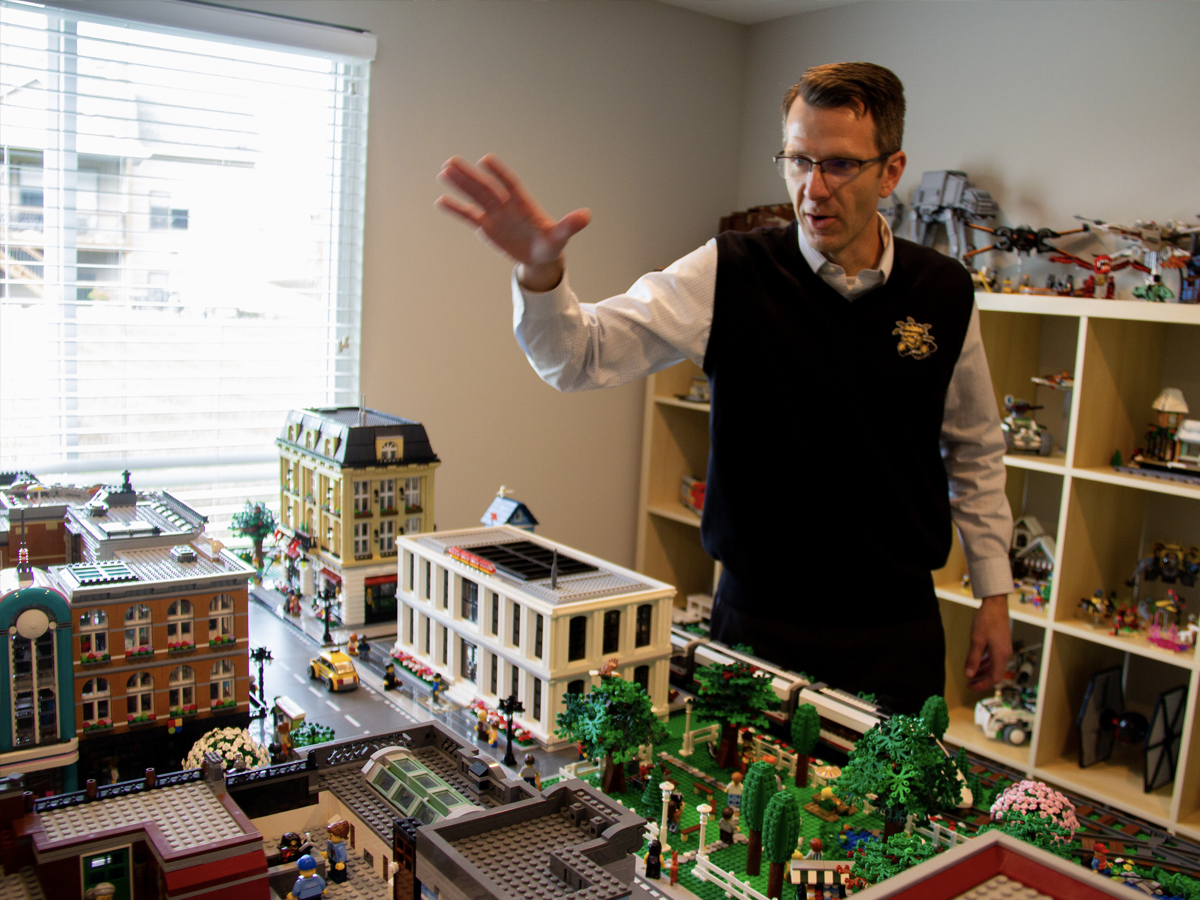 Caption: Dennis guides a tour of his LEGO city, and stands above his newest creation - his union station - of which he's very proud. Notice the "Star Wars" figures and holiday buildings on the shelves in the background. 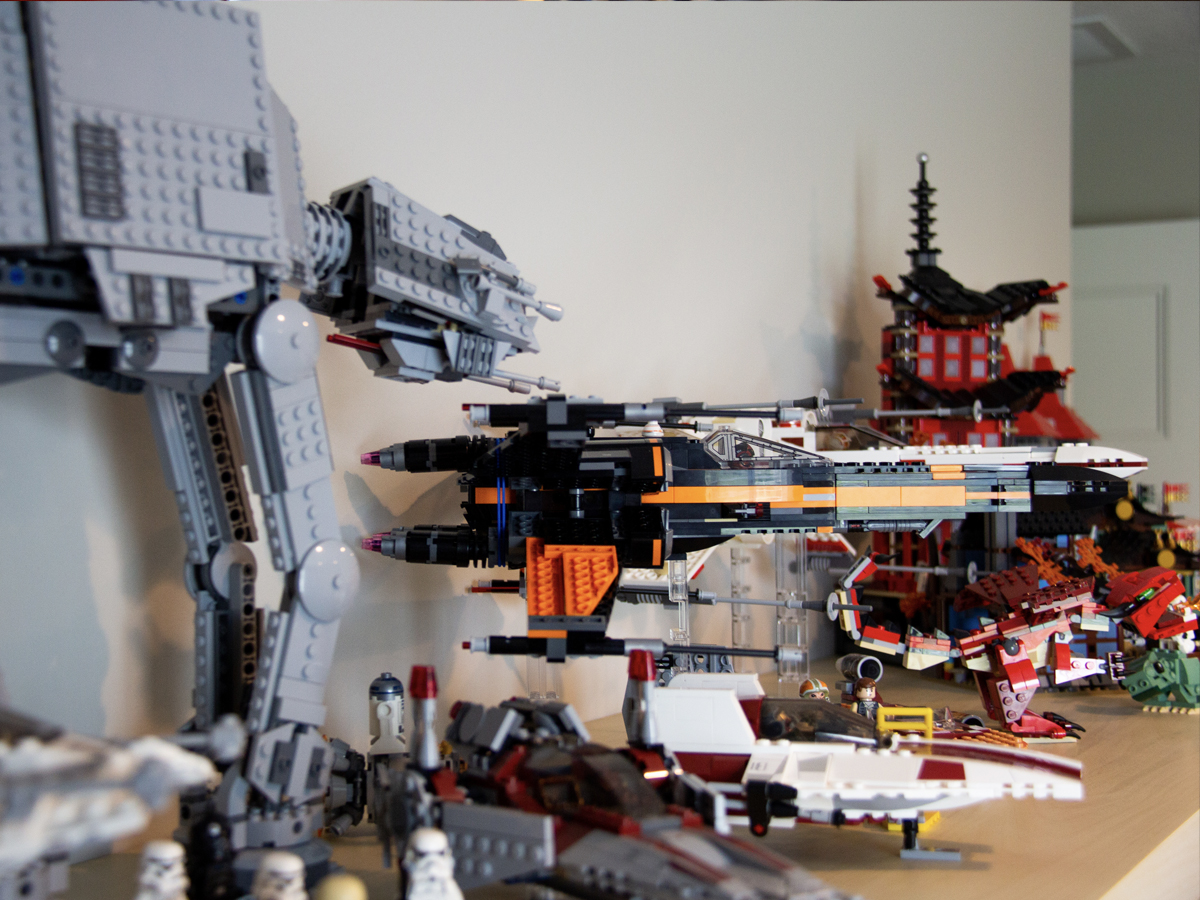 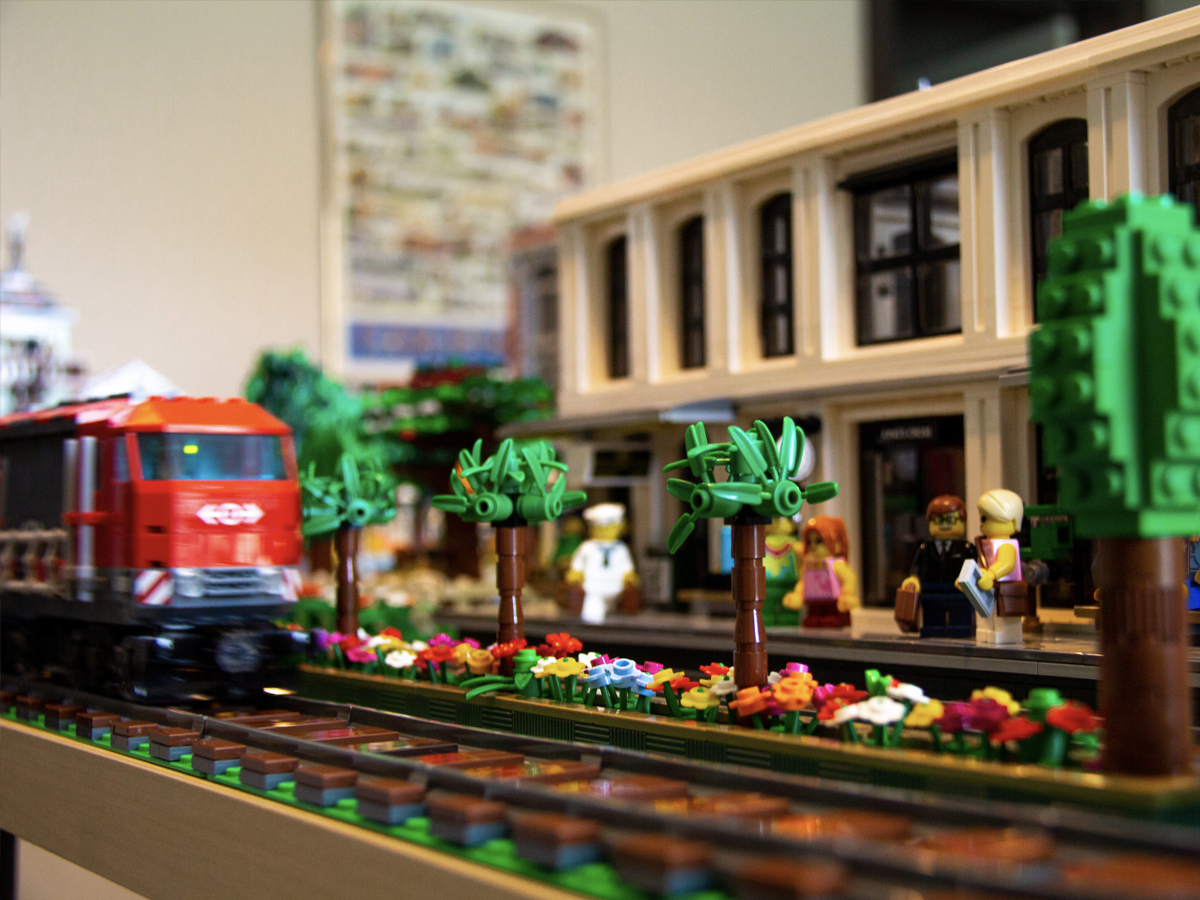 Caption: A LEGO train roars by a small crowd of minifigure travelers outside of Dennis' new union station building. Notice the colorful foliage and the navy sailor in the background. 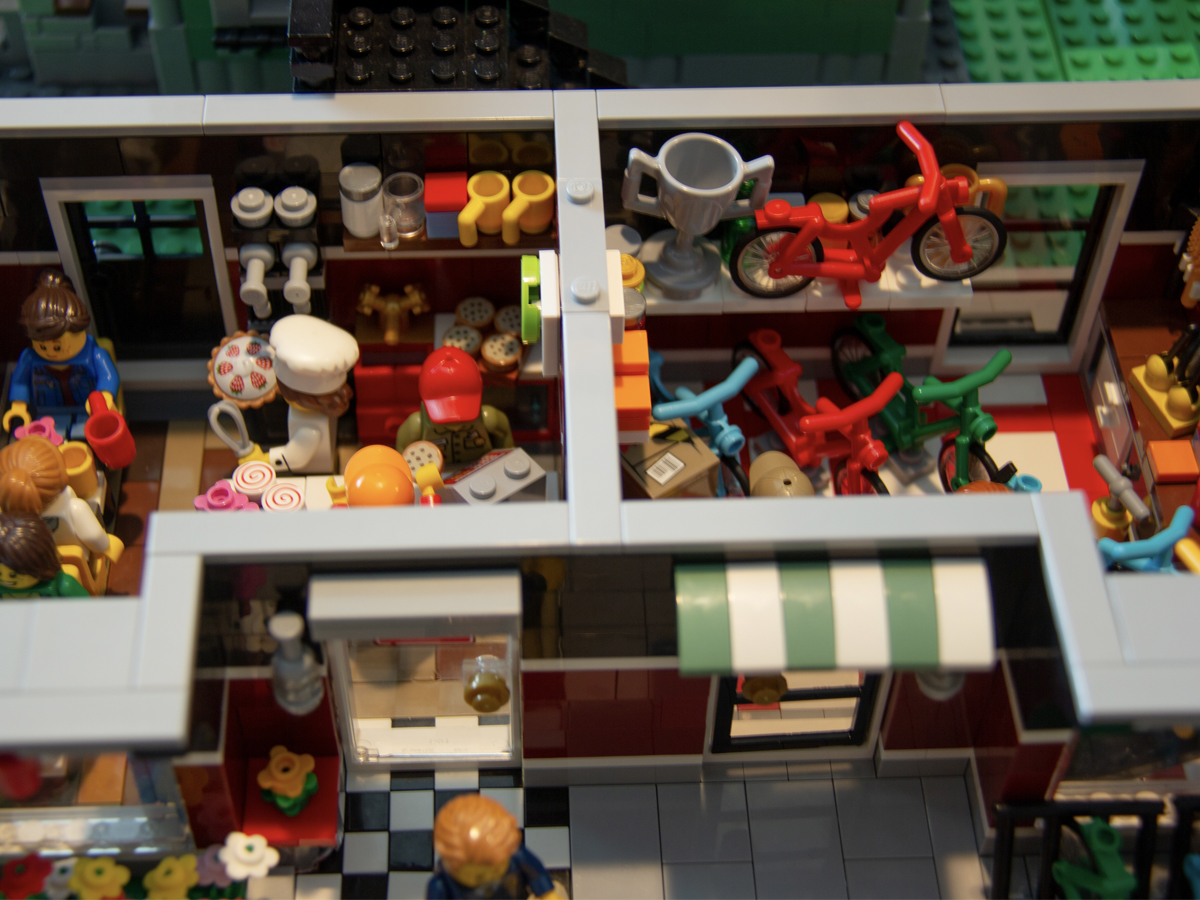 Caption: Dennis can detach all of his buildings' roofs to reveal the detailed interiors, including the bakery and bike shop pictured here. That pastry chef looks awfully busy. 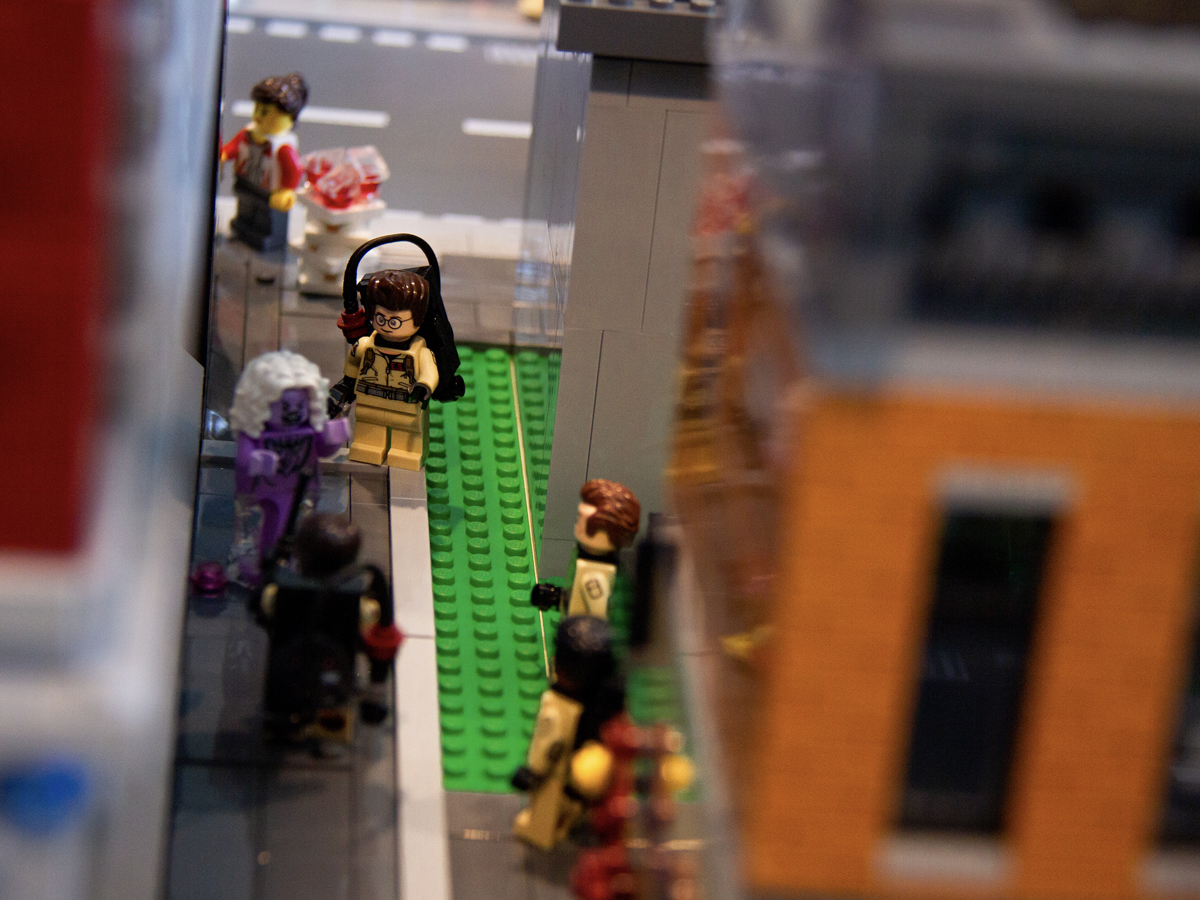 Caption: Who you gonna call? All four minifigure Ghostbusters confront a ghost haunting an alley behind their building. The LEGO city is filled with characters from all kinds of media. 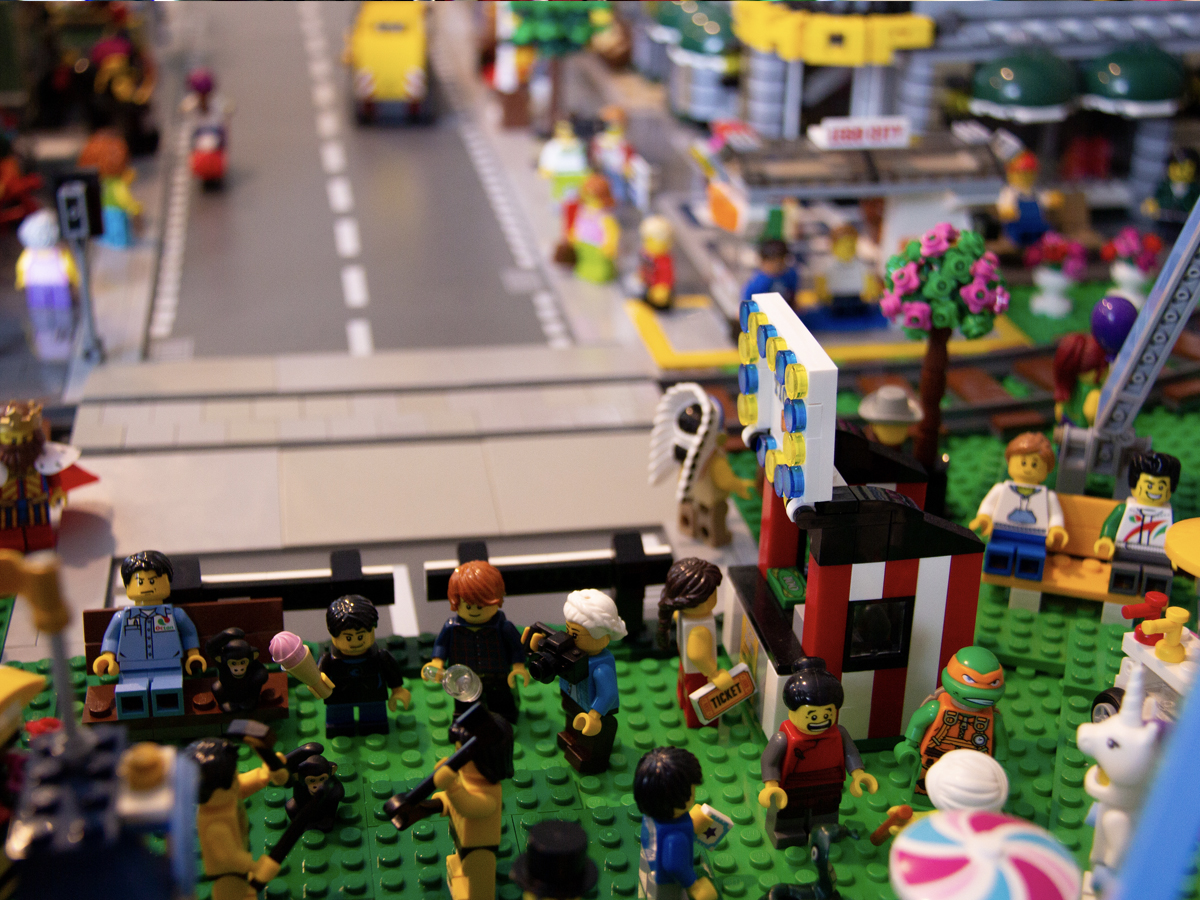 Caption: This carnival is filled with all kinds of minifigures representing a wide array of people, much like the rest of the city. One of these minifigures is not like the other. 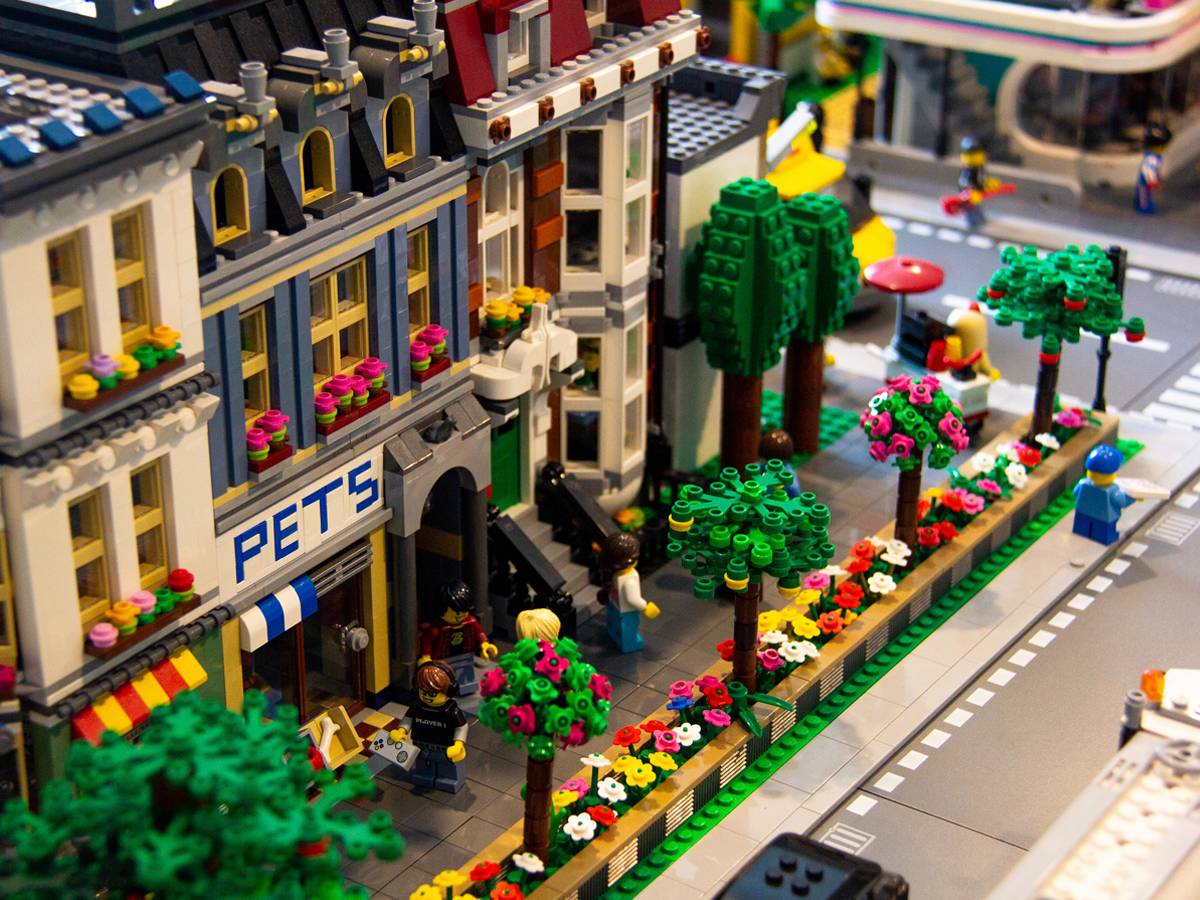 Caption: Dennis' LEGO buildings are created with actual architectural principles. Like many AFOLS, short for "adult fans of LEGOs," he uses a combination of math and art to create his city with precision and beauty.