EPSCoR funding will allow assistant professor Lauren Greenlee to work with scientists at UNLV on materials to improve fuel cells and batteries. 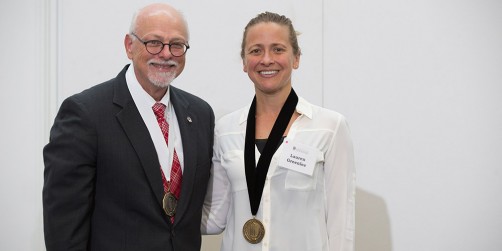 Newswise — FAYETTEVILLE, Ark. – The National Science Foundation’s Established Program to Stimulate Competitive Research, or EPSCoR, announced Wednesday that Lauren Greenlee, assistant professor of chemical engineering, will receive a fellowship award of $267,507 to continue her work characterizing metal-based catalysts to improve the next generation of fuel cells and batteries.

The award is part of EPSCoR’s new initiative to help researchers collaborate with premier research centers to enhance their ability to develop their research and technology. Greenlee and a graduate student will work with scientists at the University of Nevada, Las Vegas, a premier site for soft X-ray spectroscopy.

Greenlee will use this technique for determining the electronic structure of materials to characterize a suite of thin film and nanoparticle catalysts made of iron and nickel. Chemists and engineers have high hopes for these metals as a cheaper and more abundant alternative to precious metals, such as platinum, that are used in the production of fuel cells and batteries.

These energy conversion technologies are based on electrochemistry, a process by which a metal-based catalyst produces a desired reaction. Greenlee has extensive experience with electrocatalysts and electrochemical applications for industry, including alternative methods for producing ammonia and commercial fertilizer.

EPSCoR funds are available to researchers in jurisdictions that have historically received lesser amounts of NSF research and development funding. These jurisdictions include 28 states, the Commonwealth of Puerto Rico, and the U.S. Virgin Islands. Arkansas and Nevada are EPSCoR states. Through the EPSCoR program, the NSF establishes partnerships with government, higher education and industry to make sustainable improvements in a jurisdiction's research infrastructure, research and development capacity and national competitiveness.