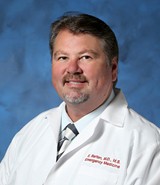 Erik Barton, MD, MS, MBA, has been appointed System Chair of the Department of Emergency Medicine at the Icahn School of Medicine at Mount Sinai

Newswise — (New York – July 26, 2017) Erik Barton, MD, MS, MBA, has been appointed System Chair of the Department of Emergency Medicine at the Icahn School of Medicine at Mount Sinai. His new role will begin on August 1, 2017.

Dr. Barton was Chair of Emergency Medicine and Executive Medical Director at the University of California-Irvine School of Medicine and UC Irvine Health. He is a highly respected academic administrator and an experienced emergency medicine physician with a special interest in emergency department operations and airway management. At UC Irvine, Dr. Barton has implemented significant improvements in patient experience, safety, quality, and Emergency Department throughput. In his prior role as Division Chief and Executive Medical Director of Emergency Medicine at the University of Utah for more than a decade, he launched a premier emergency medicine residency as well as fellowship training programs. He also built several highly regarded clinical programs for the University of Utah system. Dr. Barton is co-editor of the textbook Emergency Medicine: Clinical Essentials, now in its second edition.

“It is an honor to be selected for this position,” said Dr. Barton. “This is an exciting time for Mount Sinai and the practice of emergency medicine as we move towards a system-based practice in providing exceptional patient care and experiences. Mount Sinai Health System is in a unique position to shape the future of acute, unscheduled care delivery models for the citizens of New York City, and I am proud to be part of that.”

Dr. Barton earned his medical degree at the University of California-San Diego, where he also completed his internship and residency. He spent most of his academic career at the University of Utah, rising to the rank of tenured professor, and earned an MBA at the university’s David Eccles School of Business. A committed educator, Dr. Barton has received numerous awards and holds institutional development grants on emergency medicine fellowship training in India and on air medicine (emergency service provision during air transit).

Dr. Barton will succeed Andy Jagoda, MD, who has been chair of the department for eight years. Dr. Jagoda will remain at Mount Sinai to create and lead a new research and education center in emergency medicine.

The Department of Emergency Medicine at the Mount Sinai Health System is one of the largest in the country and treats more than 600,000 patients annually. The research division is ranked No. 2 in the country in funding from the National Institutes of Health (NIH).

The Mount Sinai Health System is an integrated health system committed to providing distinguished care, conducting transformative research, and advancing biomedical education. Structured around seven hospital campuses and a single medical school, the Health System has an extensive ambulatory network and a range of inpatient and outpatient services—from community-based facilities to tertiary and quaternary care.

The System includes approximately 7,100 primary and specialty care physicians; 12 joint-venture ambulatory surgery centers; more than 140 ambulatory practices throughout the five boroughs of New York City, Westchester, Long Island, and Florida; and 31 affiliated community health centers. Physicians are affiliated with the renowned Icahn School of Medicine at Mount Sinai, which is ranked among the highest in the nation in National Institutes of Health funding per investigator. The Mount Sinai Hospital is in the “Honor Roll” of best hospitals in America, ranked No. 15 nationally in the 2016-2017 “Best Hospitals” issue of U.S. News & World Report. The Mount Sinai Hospital is also ranked as one of the nation’s top 20 hospitals in Geriatrics, Gastroenterology/GI Surgery, Cardiology/Heart Surgery, Diabetes/Endocrinology, Nephrology, Neurology/Neurosurgery, and Ear, Nose & Throat, and is in the top 50 in four other specialties. New York Eye and Ear Infirmary of Mount Sinai is ranked No. 10 nationally for Ophthalmology, while Mount Sinai Beth Israel, Mount Sinai St. Luke's, and Mount Sinai West are ranked regionally. Mount Sinai’s Kravis Children’s Hospital is ranked in seven out of ten pediatric specialties by U.S. News & World Report in "Best Children's Hospitals."For more information, visit http://www.mountsinai.org/, or find Mount Sinai on Facebook, Twitter and YouTube.