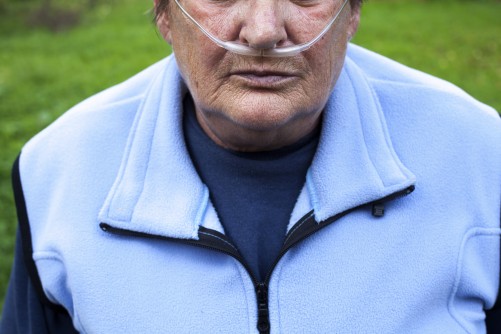 Newswise — ATS 2016, SAN FRANCISCO ─ In patients with chronic obstructive pulmonary disease (COPD), exacerbations accelerated lung function loss, according to a new study presented at the ATS 2016 International Conference. The effect was particularly prominent in those with mild disease.

Investigators analyzed data from 2,861 patients in the COPDGene 5-year follow-up cohort study. All COPDGene participants were current or former smokers. Spirometry, used to diagnose COPD and assess lung function, was performed at study entry in all subjects and at follow-up in 2,000 subjects. Exacerbations were defined as acute respiratory symptoms that required antibiotics or systemic steroids; severe events were defined by the need for hospitalization. (In those without established COPD, the criteria were used to define acute respiratory events.)

Thirty-seven percent of patients reported at least one exacerbation/acute respiratory event. In patients with COPD, each exacerbation was associated with excess loss of lung function, as measured by FEV1—the amount of air a person can forcefully blow out of their lungs in one second.

The investigators saw the greatest excess loss of FEV1 in those with mild COPD. Acute respiratory events were not associated with additional FEV1 decline in subjects who did not have airflow obstruction.

“Our findings are particularly novel due to our large numbers of persons with mild COPD—a group that has not been well studied in previous investigations,” Kunisaki said. The investigators recommend additional trials to test existing and novel therapies in subjects with early or mild COPD, to potentially reduce the risk for progression to more advanced lung disease.

Introduction/RationaleAcute exacerbations of chronic obstructive pulmonary disease (COPD) are critical events that increase the risk of death, impair quality of life and drive healthcare costs, but whether they accelerate loss of lung function remains controversial. No study has adequately examined whether exacerbations in subjects with mild COPD, or similar acute respiratory events in current and former smokers without airflow obstruction, affect lung function decline.

MethodsWe examined data from the first 2,000 subjects who returned for a second COPDGene visit, approximately 5 years after their initial visit. COPDgene study participants were current or former smokers and all performed spirometry at both study visits. Baseline data included demographics, smoking history and CT emphysema. We defined exacerbations (and acute respiratory events in those without established COPD) as acute respiratory symptoms requiring use of either antibiotics or systemic steroids, and severe events by the need for hospitalization. Throughout the 5-year follow-up period, we collected self-reported acute respiratory event data at six-month intervals. Linear mixed models were used to fit FEV1 decline, stratified by GOLD group. Primary predictors included visit (baseline and follow-up), acute respiratory events/exacerbations and their interaction. Covariates included baseline race, sex, percent emphysema, smoking status, weight, age, height and bronchodilator response. Percent emphysema was evaluated at Visit 1 and the smoking status variable was created based on longitudinal follow-up information. An unstructured covariance structure was used for repeated measures. Total number of exacerbations and number of severe exacerbations were used as predictors in separate models.

ConclusionsExacerbations accelerate lung function loss in subjects with established COPD, particularly those with mild disease. Our findings are particularly novel due to the lack of large numbers of persons with mild COPD in previous investigations. Trials are needed to test existing and noveltherapies in subjects with early/mild COPD to potentially reduce the risk of progressing to more advanced lung disease.