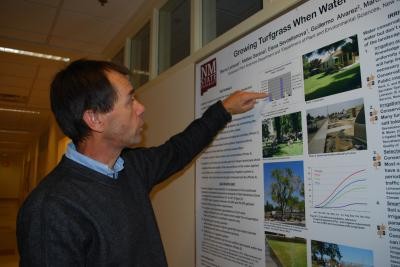 "Our research is all about water conservation. We are focusing on water preservation in the landscape," Leinauer said. "We need water to grow plants in the desert, but when water is used for aesthetics instead of food, for example, it becomes questionable. So, how much water can we afford to use?"

Leinauer found that approximately 50 percent of potable water usage during the summer in Las Cruces goes to irrigating the landscape.

"That is true for almost any city in the desert Southwest," he said. "Which is considered non-essential, but I would argue that it is important because when we have green space, it contributes to our well-being and moderate climate, but at the end of the day, it is a large amount of water we use for the urban landscape."

In October of last year, Leinauer was invited to Athens, Greece, which has a similar climate to that of the American Southwest and also faces a water shortage. His research group presented some of his projects and findings on landscape water conservation issues.

"We are in a climate that is representative of many others in the world and our research applies to many other areas. Arguably, we are considered the leaders in the world," he said. "We, at New Mexico State, are at the forefront in research relating to salinity tolerance and subsurface irrigation."

Leinauer said cities are taking measures to keep landscaped spaces, especially in residential areas, but reducing the outdoor and landscaped area in new housing developments, which consequently reduces the area of irrigation. A second proposed conservation strategy is to have new developments receive two water lines: one for potable water and one for non-potable, treated water for outdoor irrigation, he added. Leinauer's research also explores alternative irrigation sources to using potable water while maintaining safety and aesthetics.

"The treated effluent a city produces should be considered an alternative source of water. It's not potable, and so far it is just put into the river and sent to El Paso and eventually on to Mexico," he said.

This water can potentially be used for irrigation in Las Cruces since other cities such as El Paso, Albuquerque and Santa Fe use it heavily for their parks and golf courses.

"However, using effluent on residential areas is trickier because while on principle, a homeowner understands how important water conservation is, but at the end of the day there is also opposition to using treated water close to home. Of course most of these waters meet the U.S. Environmental Protection Agency's standards and there is little to no risk of pathogen contamination," he said.

Leinauer said 70 to 80 percent of all water in New Mexico is saline groundwater and it cannot be used for drinking because it has too much salt, but it could be another alternative for potable irrigation.

He added that making the shift to using saline groundwater for irrigation requires looking for plants that can withstand the various amounts of salt.

"If we switch to the high salinity water, even for the residential side, we have to add salinity tolerance as a requirement for plant selection," Leinauer said. "Now, some plants are already resistant to high salinity, but others are not, particularly flowers and shrubs. We are also looking at grasses and testing to see if they meet the criteria."

Another part of the water conservation project is investigating new and more efficient irrigation systems. Leinauer has been looking at using subsurface water to decrease the waste of water.

"This way you take irrigation out of sight and below ground, therefore, you are not throwing it in the air before it has to land on the ground," he said. "One of the reasons we use so much water during the summer, especially in the residential sector, is that irrigation systems we have in place are extremely inefficient. You see water on the sidewalk or water running down the street. That is not efficient and beneficial use."

Leinauer has been researching turfgrass and water conservation for 13 years. Two years ago he received a grant from the National Science Foundation to investigate the use of treated effluent in residential areas. This is an ongoing research project in partnership with the University of California, Berkeley, Stanford University and Colorado School of Mines.