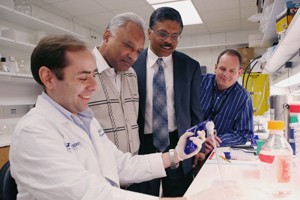 Dr. Abhimanyu Garg (second from right), along with (from left) colleagues Dr. Victor Cortés, Dr. Anil Agarwal and Dr. Jay Horton, has uncovered crucial clues about lipodystrophies, metabolic disorders characterized by the selective loss of fat tissues and complications of insulin resistance. Patients with the disorders manufacture little or no body fat, yet develop many of the health complications usually found in obese people.

Newswise — Researchers at UT Southwestern Medical Center have uncovered crucial clues about a paradoxical disease in which patients with no body fat develop many of the health complications usually found in obese people.

The findings in mice, appearing online today in Cell Metabolism, have led to the initiation of a National Institutes of Health-funded clinical trial to determine whether eating an extremely low-fat diet could prevent many of the metabolic complications brought on by lipodystrophy.

Lipodystrophies are metabolic disorders characterized by the selective loss of fat tissues and complications of insulin resistance. Scientists speculate that the condition could be caused by the failure of stem cells to become fat cells.

"These patients don't have fatty tissue, even inside their abdomen," said Dr. Abhimanyu Garg, professor of internal medicine at UT Southwestern and senior author of the study. "They basically lack all the fat we see in a typical person, but their livers are loaded with fat. That's a big problem because too much fat in the liver leads to liver damage.

"We cannot do anything to reverse fat loss, but our findings might lead to the development of new therapies for the metabolic complications of lipodystrophy, such as diabetes, fatty liver and high triglycerides," said Dr. Garg, an investigator in the Center for Human Nutrition.

Dr. Garg has been studying patients with lipodystrophies for more than 20 years. He and colleagues at UT Southwestern have led the way in identifying gene mutations responsible for several forms of lipodystrophy and in identifying novel therapeutic approaches for these patients.

"We generated this mouse model to learn why humans with this type of lipodystrophy develop metabolic complications," Dr. Garg said.

The researchers found that mice without the AGPAT2 enzyme used a novel, previously uncharacterized pathway to synthesize fat in their liver. Dietary fat also contributed to fat accumulation in the liver. Typically, particles called chylomicrons carry dietary fat throughout the body and release it in peripheral tissues so that it can either be stored in adipose tissue for later use or immediately burned as energy by muscles. Normally, adipose tissue provides fatty acids for fat synthesis in the liver. In these lipodystrophic mice, however, the adipose tissue did not release the excess fatty acids and the dietary fat accumulated in the liver.

What is surprising about this, Dr. Garg said, is that the amount of fat stored in the liver dropped substantially when researchers put the lipodystrophic mice on a fat-free diet. "Just eliminating the dietary fat reduced liver triglycerides by approximately 50 percent," he said.

In addition to establishing a clinical trial, Dr. Garg said the next step is to study the stem cells from the mice with lipodystrophy in order to determine why their stem cells become bone and muscle but not fat.

The research was funded by the NIH, Southwestern Medical Foundation and the Perot Foundation. Dr. CortÃ©s is supported by a postdoctoral fellowship from Pontificia Universidad CatÃ³lica de Chile and a presidential fellowship from the Chilean government.