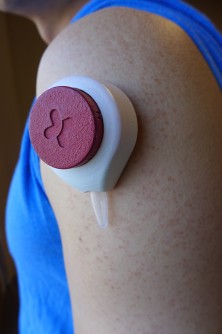 This prototype device is being developed into a fool-proof, almost painless way to draw blood samples by Tasso, formed by students of the University of Wisconsin-Madison.

Newswise — MADISON, Wis. — A company with deep roots at the University of Wisconsin-Madison wants to make blood sampling less painful and more convenient. Tasso Inc. is perfecting a device the size of a pingpong ball that extracts a small sample while held against the skin for two minutes.

During this time, a slight vacuum in the device enables a small sample of blood to flow into an attached sample tube, which can be mailed or handed to a lab. Users report that the process is almost entirely painless.

The company has just received an additional $3 million from the Defense Advanced Research Projects Agency (DARPA) to advance its product.

The technology relies on the forces that govern the flow of tiny fluid streams, says Ben Casavant, vice president and co-founder. "At these scales, surface tension dominates over gravity, and that keeps the blood in the channel no matter how you hold the device."

The company — whose name means "badger" in Italian — has applied for a patent on channels that create capillary action to move blood toward the sample tube.

All three of the founders studied this technology, called microfluidics, in the lab of David Beebe, professor of biomedical engineering at UW-Madison. "I was studying circulating tumor cells," says Casavant. "Erwin (Berthier, now head of research and development) was looking at the movement of immune cells, and Ben (Moga, now president) was working on an injectable-device startup."

The patent pending invention was made during a different project in Beebe's lab, Casavant says, and it sparked a classic startup story. "In 2010, Erwin and I were in a coffee shop, and we thought, 'Let's start a company — but about what?' We wanted to use all the cool stuff we had learned to help people, to make products that are useful."

Moving the blood in open channels rather than traditional closed channels will simplify manufacturing and cut costs for a disposable device that needs as few as six injection-molded plastic parts, says Casavant.

The DARPA grant will fund work with companies that make blood preservatives. The agency's goal is to stabilize the blood so it can survive one week at 140 degrees Fahrenheit and still be fit for analysis. That would enable the invention to be used to sample in a wide range of locations without needing costly cold-chain transportation.

With funding from the National Institutes of Health, Tasso is also developing a technique for taking samples to diagnose HIV. Currently, the device can extract about 0.15 of a cubic centimeter, enough to test cholesterol, infection, cancer cells and blood sugar — "basically anything that is being tested for in a modern lab," Casavant says.

Although diabetics must test their blood sugar several times a day, they are not an initial market, Casavant says, as those tests are inexpensive if somewhat painful. "We see our specialty as people who need to test semi-frequently, or infrequently, to monitor cancer or chronic infectious diseases, for example. Instead of buying a machine or expensive equipment, we ship you this device, you put it on your arm for two minutes and send it back to the lab."

The device could help those who fear blood draws, and avoid time-consuming trips to labs for blood draws.

Three of Tasso's five full-time employees have UW-Madison degrees. "I grew up in physics," says Casavant. Like Berthier, he has a Ph.D. in biomedical engineering. "Both my parents hold Ph.D.s from UW-Madison, and when I did an internship for a microfluidic company, I loved it instantly. It's a cool intersection of physics and engineering."

Moga has a master’s degree in biomedical engineering from UW-Madison as well.As Tasso edges toward the market, "we are still trying find the killer application," says Casavant. "We have some leads that we are excited about. That is what every startup should be asking: 'Who is going to buy, and how much will they pay?'"

The recent government grants mark a transition at Tasso, Casavant says. "At the beginning, investors were pretty skeptical: 'Let's see if it works. We don't see an application.' But as we got more grants, they have started taking us more seriously."

If all goes well, Casavant says, the company will send its application to the Food and Drug Administration at the end of 2015, and reach the market during 2016. ###