Tashjian is the first finance professor named to the College 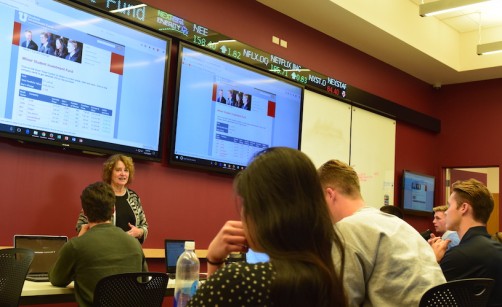 Elizabeth Tashjian will be inducted as Fellow to the College of American Bankruptcy for her contributions through her research and her dedication to her students.

Newswise — (Dec. 4, 2018) — The American College of Bankruptcy announced that Elizabeth Tashjian, professor of Finance and Garn Faculty Fellow at the David Eccles School of Business at the University of Utah, will be inducted as a Fellow of the College. The ceremony will take place on March 15, 2019 in the Crown Room of the historic Hotel del Coronado in Coronado, California and will be presided over by Marc A. Levinson, Chair of the College.

There are 36 nominees being honored and recognized for their professional excellence and exceptional contributions to the fields of bankruptcy and insolvency. The nominees reside in 18 states and four foreign countries. Tashjian is one of only two professors being inducted this year, and she is the first-ever true finance professor to be inducted into the College.

“It comes as no surprise to me that the American College of Bankruptcy has recognized Liz’s excellent research on bankruptcy and insolvency,” said Taylor Randall, dean of the David Eccles School of Business. “The College nominating her as the first finance professor to be inducted is a testament to her impact in furthering understanding of that world.”

Annette W. Jarvis, Dorsey & Whitney LLP partner and member of the Firm’s Management Committee, is a current Fellow in the College. She said Tashjian’s unique blend of both expertise in finance research on bankruptcy and insolvency and her dedication to her students and community make her deserving of induction as a Fellow.

“It really is an honor for Liz because it is difficult to get invited to the College. Liz has made a big difference in understanding how the bankruptcy system works for businesses and the economy,” Jarvis said. “This also is a big step for the College in inviting its first true finance professor and embracing specialties that we should be.”

Nominees undergo a rigorous nomination process and are extended an invitation to join based on a record of achievement reflecting the highest standards of professionalism. The College now has 900 Fellows, each selected by a Board of Regents from among recommendations of the Circuit Admissions Council in each federal judicial circuit and specially appointed Committees for Judicial and International Fellows.

Criteria for selection include: the highest standard of professionalism, ethics, character, integrity, professional expertise and leadership contributing to the enhancement of bankruptcy and insolvency law and practice; sustained evidence of scholarship, teaching, lecturing or writing on bankruptcy or insolvency; community service; and commitment to elevate knowledge and understanding of the profession and public respect for the practice.

For more information about the American College of Bankruptcy, or about the 2019 Induction Ceremony, contact Shari A. Bedker, Executive Director at 434-939-6004 or email at [email protected].

About the American College of Bankruptcy

The College was formed in 1989 and has more than 800 Fellows that are selected by a Board of Regents from among recommendations received from the Circuit Admissions Council in each federal judicial circuit. The mission of the College is to honor and recognize distinguished bankruptcy professionals who are qualified for membership in an effort to set standards of achievement for others in the insolvency community, and to fund and assist projects that enhance the highest quality of bankruptcy practice, including undergraduate and graduate programs related to bankruptcy and insolvency.

About the David Eccles School of Business

The Eccles School is synonymous with ‘doing.’ The Eccles experience provides a world-class business education with a unique, entrepreneurial focus on real-world scenarios where students put what they learn into practice long before graduation. Founded in 1917 and educating more than 6,000 students annually, the University of Utah David Eccles School of Business offers nine undergraduate majors, four MBAs, eight other graduate programs, a Ph.D. in seven areas and executive education curricula. The School is also home to 12 institutes, centers and initiatives that deliver academic research and support an ecosystem of entrepreneurship and innovation. For more information, visit Eccles.Utah.edu or call 801-581-7676.