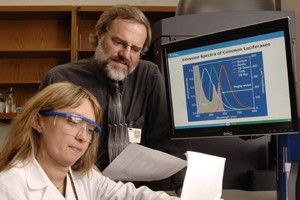 Scientists led by radiologist Dr. Ralph Mason and including research assistant Ana Gondim are among the first to show in mice that a technique called bioluminescence imaging (BLI) can be used to determine the effectiveness of cancer drugs that choke off a tumor's blood supply.

Newswise — The gene that allows fireflies to flash is helping researchers track the effectiveness of anti-cancer drugs over time.

UT Southwestern Medical Center researchers are among the first to show that a technique called bioluminescence imaging (BLI) can be used to determine the effectiveness of cancer drugs that choke off a tumor's blood supply.

The technique requires a substrate called luciferin to be added to the bloodstream, which carries it to cells throughout the body. When luciferin reaches cells that have been altered to carry the firefly gene, those cells emit light.

Some cancer drugs, however, work by cutting off the blood supply to tumor cells. Given that luciferin is delivered via the vasculature, the researchers set out to determine the kinetics of luciferin delivery and whether BLI techniques could be used to gauge the effectiveness of drugs that destroy blood vessels that feed tumors.

They tested their theory in mice bearing human breast-cancer tumors. Before being introduced to the animals, the tumor cells had been transfected with the firefly gene, which becomes part of the cells as they divide and grow just like genetically modified, herbicide-resistant food crops.

For the study, researchers used BLI to monitor light emissions from tumors following administration of the luciferin. While the mice didn't visibly glow, the researchers used special light-detecting equipment to observe strong correlations between the amount of light emitted and the size of the tumor as it grew. Detected light emission, however, was severely reduced after the vascular-disrupting drug was administered.

"What we've done is offer proof-of-concept that BLI may be an effective and cheaper method to assess drug development and effectiveness," said Dr. Ralph Mason, professor of radiology, director of the UT Southwestern Cancer Imaging Center and senior author of the study. "The technique is not intended to be used for imaging tumors or diagnosing cancer in humans, but it potentially allows us to do much more efficient pre-clinical experiments."

The findings are available online and in a future issue of the <em>Journal of the Federation of American Societies for Experimental Biology.</em>

Although magnetic resonance imaging (MRI) remains the gold standard of medical imaging, BLI has its advantages. The noninvasive procedure allows detection of cell viability not accessible by MRI and is less costly, according to researchers at UT Southwestern.

"Ultimately, the MRI is much more sophisticated and can do more, but BLI is very straight-forward," Dr. Mason said. "It's perfect for evaluating new classes of drugs designed to cause acute vascular changes in tumors because the tests are inexpensive and easy to do."

Dr. Mason said it's critically important to develop new chemotherapeutic drugs because existing therapies, when used on their own, are far from ideal. "We're lacking the optimal drugs as demonstrated by the people who are not cured by chemotherapy," he said.

He said many existing drugs kill 99 percent of a tumor but allow a few cells to survive, giving the tumor an opportunity to grow back.

"Therefore, you need to do a lot of tests to optimize dosing, optimize repeat delivery and probably optimize the co-administration of other, more traditional drugs or therapies," he said. "BLI provides an opportunity to do those tests cheaply and efficiently."

Dr. Mason said a handful of faculty members spent several months and about $50,000 to build the BLI instrument they used to collect this data. The team needed the charge-coupled device to detect the light emitted by the cancer cells because the light is too weak for human eyes to see.

Dr. Mason said the device is essentially an astronomy kit.

"When you're looking at the stars, you're trying to assess very weak light signals," he said. "We're using the same type of instrument to access very weak light coming out of an animal. The difference is that here, we have a very sensitive camera instead of a telescope."

The team has since received a shared instrumentation grant totaling $334,600 from the National Institutes of Health to purchase a commercial bioluminescence imaging system for biomedical research. The system is being used by two dozen research teams at UT Southwestern.

The work was supported by the Department of Defense and the National Cancer Institute.

Journal of the Federation of American Societies for Experimental Biology