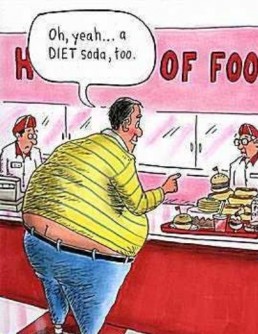 Newswise — MELROSE PARK, Ill. – You are making a healthier choice when opting for a diet soda instead of a calorie-laden drink, but beware that you don’t sabotage your good behavior by indulging in fat-adding foods. “I suspect that people are likely drinking those diet sodas to wash down high fat and high-calorie fast food or take-out meals, not as a complement to a healthy meal prepared at home or to quench a thirst after a tough workout, ” says Jessica Bartfield, MD, internal medicine who specializes in weight and nutrition at Gottlieb Memorial HospitalDr. Bartfield takes issue with two recent studies were presented at the American Diabetes Association in June that conclude that diet soda negatively impacts your waistline.

One study tracked 474 people, all 65 to 74 years old, for nearly a decade. It measured height, weight, waist circumference and diet soda intake every 3.6 years. The waists of those who drank soft drinks grew 70 percent more than those who did not.

Another study found that after three months of eating food containing aspartame, mice had higher blood sugar levels than rodents who ate regular food. Researchers concluded that aspartame could trigger the appetite but not satisfy it, leading you to eat more in general.

“The association studies are significant and provocative, but don’t prove cause and effect,” says Bartfield who counsels weight-loss patients at the Chicago-area Loyola University Health System. “Although these studies controlled for many factors, such as age, physical activity, calories consumed and smoking, there are still a tremendous number of factors such as dietary patters, sleep, genetics, and medication use that account for the metabolic syndome/weight gain.”

For people trying to lose weight, switiching from sugar-sweetened beverages to diet soda can have a tremendous impact on calorie reduction but Dr. Bartfield feels it comes down to one basic principle. “It still comes down to moderation,” she says. “I caution patients to keep it to one or two diet sodas per day.”