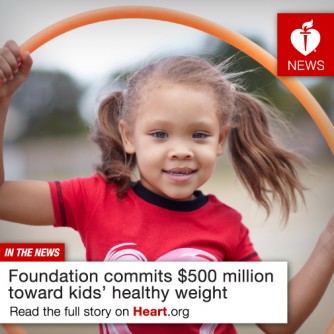 About one in three American kids and teens is overweight or obese, according to the American Heart Association. Many of those children struggle with high blood pressure, Type 2 diabetes and elevated blood cholesterol levels. In addition, excess weight at a young age has been linked to earlier death rates in adulthood.

The foundation said it will commit $500 million over the next 10 years to expand efforts to help more children grow up at a healthy weight. This builds on a $500 million commitment made in 2007.

“By 2025, we want to ensure that children in America grow up at a healthy weight, no matter who they are or where they live,” said RWJF President and CEO Risa Lavizzo-Mourey, M.D. “We have made substantial progress, but there is far more to do and we can’t stop now. We all have a role to play in our homes, schools, and neighborhoods to ensure that all kids have healthy food and safe places to play.”

With the new commitment, the foundation will support strategies to ensure that children enter kindergarten at a healthy weight. Other focus areas include making healthy school environments the norm, advocating for youth to get more physical activity, making healthy foods and beverages affordable and accessible, and eliminating the consumption of sugar-sweetened beverages in children 5 and under.

“Our organizations are fortunate to have a decades-long partnership in devoting resources that align to advance research, shift individual behaviors and social norms, and advocate for change so that all people can live healthier lives,” she said.

Nationally, childhood obesity rates have begun to level off, according to the Centers for Disease Control and Prevention. The CDC also released data last year showing rates may be decreasing among the nation’s youngest children.

But these initial reports of declines follow decades of increases, according to the RWJF. And more than one-third of young people are overweight or obese.

The foundation plans to intensify its focus on areas hardest hit by obesity. It said it will work to help eliminate disparities that contribute to higher obesity rates among children of color and those living in poverty.

African-American and Latino youth continue to have higher obesity rates than their white peers, even in most areas reporting overall progress. Among the cities and states reporting obesity declines, only Philadelphia has measured progress toward narrowing disparity gaps. Obesity rates there have dropped sharply in African-American boys and Latino girls, the foundation said.