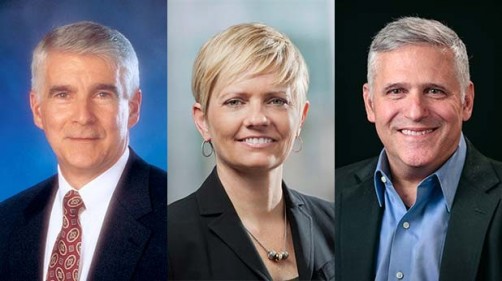 “Our board is now even better prepared to support Fred Hutch’s scientists in their search to discover new cancer therapies that can save millions of lives,” said Christine “Chris” Gregoire, former Washington state governor, who was elected yesterday to a second term as chair of the board. “Bob, Phil and Leigh bring skills that will help the Hutch continue to transform cancer care, to integrate the most advanced technologies into its research, and to raise awareness globally of the challenges to curing cancer — and the tremendous progress we are making to achieving that goal.”

Robert “Bob” Herbold, managing director of the Herbold Group LLC consulting firm, was formerly executive vice president and chief operating officer at Microsoft, where from 1994 through 2001 he was responsible for finance, corporate marketing, market research, manufacturing and distribution, information systems, human resources and public relations. Prior to Microsoft, he spent 26 years at Procter & Gamble Co., serving his last five years there as senior vice president of marketing and information services. He previously served on the Hutch board from 2006 to 2010. A gift from Herbold and his wife led to the establishment in 2005 of the Herbold Computational Biology Program at Fred Hutch.

Phil Kent is the retired chairman and CEO of Turner Broadcasting System, Inc. He was responsible for a portfolio of news, entertainment and animation, young adult and kids networks and businesses including CNN, CNN International, CNN.com and HLN; TBS, TNT, Turner Classic Movies and truTV; Cartoon Network and Adult Swim; and Turner Sports. Previously, he served as president and chief operating officer of CNN News Group. Currently, Kent is chairman of VEVO LLC, a joint venture of Sony Music and Universal Music Group, which is one of the leading content channels on YouTube and the leading online distributor of music videos.

Leigh Morgan for three years served as chief operating officer of the Bill & Melinda Gates Foundation, where she was a leader of its transformation efforts, including overseeing governance, human capital strategies and digital and information security platforms. As a member of the executive leadership team, she also contributed to the foundation's international development and domestic education strategies. Her previous leadership roles include associate chancellor at the University of California, San Francisco and vice president and global head of human resources (product development) at Genentech, a biotechnology company.

“We are well on track to deliver new cures for many cancers in the next decade, and I believe that Bob, Phil and Leigh are going to make important contributions to the Hutch’s efforts,” said Dr. Gary Gilliland, Fred Hutch’s president and director. “With millions of lives at stake, the urgency of this mission has drawn them and other talented, dedicated people to join the Hutch and advance our work to eliminate the suffering caused by cancer.”

In addition to these moves on the board, the Hutch is increasing the size of its faculty with recent recruitments in key areas, such as immunotherapy and transplantation, solid tumor research and fundamental science.

On June 19, Lynann Bradbury started as vice president of Communications and Marketing. She is former senior vice president at Waggener Edstrom, a global communications agency now known as WE Worldwide. Over a 15-year stint at the firm, Bradbury worked closely on key initiatives with the firm’s biggest client, Microsoft, including driving media coverage during a federal antitrust case.

On June 1 Jennifer Griffith joined Fred Hutch as vice president of Government and Community Relations, which involves working closely with federal, state and local governments and advocating for funding and policy initiatives that lead to cancer prevention, improved treatment and cures. Griffith worked in the Senate for 16 years, serving most recently as the staff director of the Senate Committee on Rules and Administration. Before that she was a senior vice president at the Petrizzo Group, a lobbying firm; chief of staff for Sen. Maria Cantwell (D-WA); and a staff member for Sen. Olympia Snowe (R-ME).

Along with electing three new trustees, the board re-elected two current trustees to another term: Peter Neupert, an adviser to health technology companies, and Kathy Surace-Smith, vice president, general counsel and corporate secretary for NanoString Technologies Inc. Also, in addition to re-electing Gregoire as chair, the board re-elected Matt McIlwain, managing director of Madrona Ventures Group, as vice chair and chair-elect; Norm Metcalfe, a private equity investor, as board treasurer; and Ric Anderson, executive vice president and chief operating officer of Washington Real Estate Holdings, as board secretary.

Gregoire offered special thanks to three departing trustees: Ronald Howell, CEO and president of Washington Research Foundation; Henry James, a former partner at Goldman Sachs; and Stephen Zaruby, a biotech and pharmaceutical executive. “We are grateful to Ron, Henry and Steve for their service as trustees,” she said. “Fred Hutch is stronger today because of their work.”