From Graduation to the Mayor's Office: Southeastern Alumna Serving as Mayor of Tangipahoa 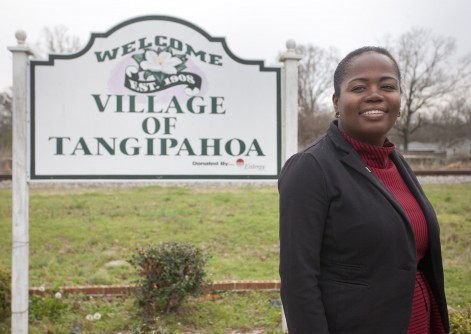 Trashica Robinson left her commencement ceremonies at Southeastern last December to learn she was elected mayor of the Village of Tangipahoa. The recent graduate of the College of Business says the skills she learned at Southeastern have prepared her to meet the challenges facing the village.

Newswise — HAMMOND – Graduation Day for most students is a chaotic and exciting time, but for Southeastern Louisiana University marketing major Trashica Robinson, it was especially so. Hours after walking across the stage at commencement last December, Robinson, 37, learned she had won the office of mayor for her hometown, the Village of Tangipahoa.

“After graduating I was stuck in traffic, trying to get back to the village to make sure people were getting out to the polls,” said Robinson. “When I got back, I was told that I wasn’t going to win, but it turns out those people were only looking at absentee ballots. When I found out the actual results, I was numb, but I knew my perseverance had paid off.”

A non-traditional student who works for the non-profit organization Southeast Advocates for Family Empowerment, Robinson – along with other Southeastern students – had an admittedly rough final semester. She had lost everything during the Great Flood of 2016 and worked full-time while managing her courses at the university. It was a burden that would have broken many students, but she credits her success to her “amazing” support system.

“I want every student at Southeastern to understand that it doesn’t matter where you come from, what you’ve done, or who you are. If you have the right support, you can excel, and your dreams can become reality,” she said. “If it wasn’t for my family, friends, and my professors, I wouldn’t have made it as far as I have.”

Robinson credits Southeastern’s College of Business with her success in the classroom and in the real world. She said it not only gave her the technical knowledge she needed to graduate, but also encouragement and emotional support during a very trying time.

“The College of Business is, as far as I’m concerned, the best on the campus,” she said. “They make sure that by the time you leave the classroom, you’re world-ready. Even outside the classroom they do everything they can for you. I was almost positive I wouldn’t be graduating because I was dealing with losing my home to the flood, but my professors sat down with me, calmed me down and help me figure out a plan.”

The newly elected mayor also credits the college for inspiring her to run for office, one instructor in particular.

“One of my instructors, Anna Bass, always shared a ‘quote of the day’ with the class before getting started. One in particular stood out to me,” said Robinson. “It was something like ‘every day we should stop and appreciate everything around us.’ One day, I did that in my community, and I decided to make the wrong things right and make the right things better.”

“I was so impressed when Ms. Robinson brought up in a class discussion in my business strategy class that she was running for mayor of her hometown,” said David Wyld, professor of management and business administration. “We talk so much about getting young people involved in the political process and in making real change happen in our communities, and she’s a wonderful exemplar of this. She faced long odds in her run for mayor – running against an ex-NFL player and more factors – and yet she took that brave step forward and actually won!”

Wyld added: I’d like to think that some of what she learned in my class – how to better communicate, how to think more strategically, and how to effectively lead change in organizations – will serve her well in office. All of us at Southeastern should be so proud of her and use her story as an example for future students on how to take what they have learned here and work to make a difference.”

Robinson campaigned on the idea of collaborating with surrounding communities and small businesses to bring her small town into the 21st century. The Village of Tangipahoa, located in the northern part of Tangipahoa Parish, is home to less than a thousand people. Because it is so small, internet providers have not invested in infrastructure there, making it difficult to connect with the outside world. Clean water and proper drainage are other big challenges faced by the community. Robinson is confident that her newfound business acumen can help create the partnerships the village needs to help her neighbors and constituents.

“My immediate hope is that we can show our neighboring communities what we’re willing to do in order to grow, and hopefully they will help us along the way,” she said.