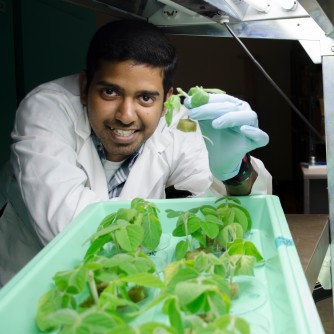 Newswise — The gene SUR2 plays a key role in the production of auxin, a hormone that affects soybean nodule development. That’s what a South Dakota State University research team, led by associate plant science professor Senthil Subramanian, has discovered as part of a National Science Foundation project to identify the genetic mechanisms that direct and coordinate formation of the soybean nodule.

The soybean plant, a legume, interacts with bacteria in the soil to form organs called nodules. Within the nodules, two distinct zones—one that fixes the nitrogen and another that transports it to the plant— are formed from the pre-existing root cells. The expression of specific genes in a particular root cell determine its function.

The overall goal of Subramanian’s research is to increase the soybean plant’s ability to fix nitrogen and thus reduce the need for chemical fertilizers.

Through their previous studies, Subramanian’s group found that auxin reduced nodule numbers. As part of a large-scale experiment to identify which genes are expressed in the nodule tissue, doctoral student Suresh Damodaran focused on identifying the genes regulating auxin levels in the nodules.

“If we consider genes as workers involved in constructing the nodules, to determine one particular gene’s function we take that gene or worker out of the system and see how the construction goes,” Damodaran explained. However, he noted, soybean genes usually belong to huge families. As a result, when one is taken out, another takes its place.

When Damodaran reduced the expression of the SUR2 gene, thus increasing auxin production, the plant produced fewer nodules. Conversely, when he treated the plant with a chemical that reduces auxin levels, the nodule numbers increased.

Plants typically use an amino acid called tryptophan to make other compounds and as a precursor from which auxin is produced. However, he pointed out, “When this gene is suppressed, all the available tryptophan appears to flow towards auxin production.”

Despite the significance of this finding, Damodaran cautioned, this is just one piece of the bigger model that will ultimately help the researchers optimize overall nodule development.

In addition to supporting the group’s initial evidence regarding auxin’s role in nodule development, Damodaran is the first to report the key role that the SUR2 gene plays in this process. This discovery helped him earn the Joseph F. Nelson Graduate Scholarship, which recognizes outstanding South Dakota State graduate students for their original scientific research.

“This scholarship is a big motivation for my research and for my future career, said Damodaran, who will complete his doctorate in plant molecular biology this year. He hopes to find a postdoctoral position working on plant development (See his Linkedin profile at https://www.linkedin.com/in/suresh-damodaran-2189a982/).