Goldilocks Stars Are Best Places to Look for Life 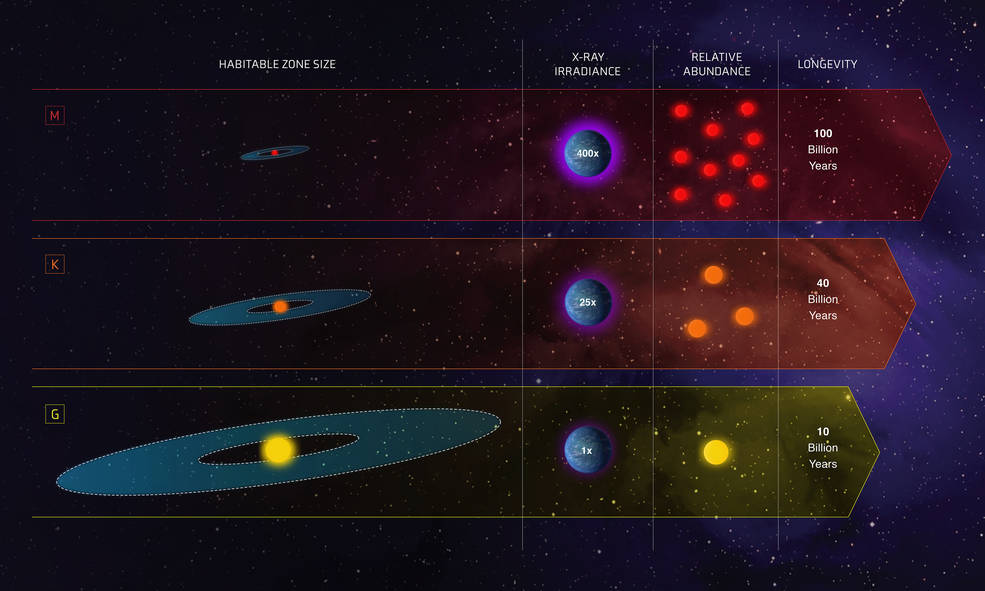 COMPARISON OF G, K, AND M STARS FOR HABITABILITY. This infographic compares the characteristics of three classes of stars in our galaxy: Sunlike stars are classified as G stars; stars less massive and cooler than our Sun are K-dwarfs; and even fainter and cooler stars are the reddish M-dwarfs. The graphic compares the stars in terms of several important variables. The habitable zones, potentially capable of hosting life-bearing planets, are wider for hotter stars. The longevity for red dwarf M stars can exceed 100 billion years. K dwarf ages can range from 15 to 45 billion years. And, our Sun only lasts for 10 billion years. The relative amount of harmful radiation (to life as we know it) that stars emit can be 80 to 500 times more intense for M dwarfs relative to our Sun, but only 5 to 25 times more intense for the orange K dwarfs. Red dwarfs make up the bulk of the Milky Way's population, about 73%. Sunlike stars are merely 6% of the population, and K dwarfs are at 13%. When these four variables are balanced, the most suitable stars for potentially hosting advanced life forms are K dwarfs.

GOLDILOCKS STARS ARE BEST PLACES TO LOOK FOR LIFE

Newswise — In the search for life beyond Earth, astronomers look for planets in a star's "habitable zone" — sometimes nicknamed the "Goldilocks zone" — where temperatures are just right for liquid water to exist on a planet's surface to nurture life as we know it.

An emerging idea, bolstered by a three-decade-long set of stellar surveys, is that there are "Goldilocks stars" — not too hot, not too cool, and above all, not too violent to host life-friendly planets.

Because our Sun has nurtured life on Earth for nearly 4 billion years, conventional wisdom would suggest that stars like it would be prime candidates in the search for other potentially habitable worlds. In reality, stars slightly cooler and less luminous than our Sun, classified as K dwarfs, are the true "Goldilocks stars," said Edward Guinan of Villanova University, Villanova, Pennsylvania. "K-dwarf stars are in the 'sweet spot,' with properties intermediate between the rarer, more luminous, but shorter-lived solar-type stars (G stars) and the more numerous red dwarf stars (M stars). The K stars, especially the warmer ones, have the best of all worlds. If you are looking for planets with habitability, the abundance of K stars pump up your chances of finding life."

For starters, there are three times as many K dwarfs in our galaxy as stars like our Sun. Roughly 1,000 K stars lie within 100 light-years of our Sun as prime candidates for exploration. These so-called orange dwarfs live from 15 billion to 45 billion years. By contrast, our Sun, now already halfway through its lifetime, lasts for only 10 billion years. Its comparatively rapid rate of stellar evolution will leave the Earth largely uninhabitable in just another 1 or 2 billion years. "Solar-type stars limit how long a planet's atmosphere can remain stable," Guinan said. That's because a billion or so years from now, Earth will orbit inside the hotter (inner) edge of the Sun's habitable zone, which moves outward as the Sun grows warmer and brighter. As a result, the Earth will be desiccated as it loses its present atmosphere and oceans. By an age of 9 billion years the Sun will have swelled up to become a red giant that could engulf the Earth.

Despite their small size, the even more abundant red dwarf stars, also known as M dwarf stars, have even longer lifetimes and appear to be hostile to life as we know it. Planets that are located in a red dwarf's comparatively narrow habitable zone, which is very close to the star, are exposed to extreme levels of X-ray and ultraviolet (UV) radiation, which can be up to hundreds of thousands of times more intense than what Earth receives from the Sun. A relentless fireworks show of flares and coronal mass ejections bombard planets with a dragon's breath of seething plasma and showers of penetrating high-energy particles. Red dwarf habitable-zone planets can be baked bone dry and have their atmospheres stripped away very early in their lives. This could likely prohibit the planets from evolving to be more hospitable a few billion years after red dwarf outbursts have subsided. "We're not so optimistic anymore about the chances of finding advanced life around many M stars," Guinan said.

The K dwarfs do not have intensely active magnetic fields that power strong X-ray and UV emissions and energetic outbursts, and therefore they shoot off flares much less frequently, based on Guinan's research. Accompanying planets would get about 1/100th as much deadly X-ray radiation as those orbiting the close-in habitable zones of magnetically-active M stars.

In a program called the "GoldiloKs" Project, Guinan and his Villanova colleague Scott Engle are working with undergraduate students to measure the age, rotation rate, and X-ray and far-ultraviolet radiation in a sampling of mostly cool G and K stars. They are using NASA's Hubble Space Telescope, Chandra X-ray Observatory, and the European Space Agency's XMM-Newton satellite for their observations. Hubble's sensitive ultraviolet-light observations of radiation from hydrogen were used to assess the radiation from a sample of about 20 orange dwarfs. "Hubble is the only telescope that can do this kind of observation," Guinan said.

Guinan and Engle found that the levels of radiation were much more benign to any accompanying planets than those found around red dwarfs. K stars also have longer lifetimes and therefore slower migration of the habitable zone. Therefore, K dwarfs seem like the ideal place to go looking for life, and these stars would allow time for highly evolved life to develop on planets. Over the Sun's entire lifetime — 10 billion years — K stars only increase their brightness by about 10-15%, giving biological evolution a much longer timespan to evolve advanced life forms than on Earth.

Guinan and Engle looked at some of the more interesting K stars hosting planets, including Kepler-442, Tau Ceti, and Epsilon Eridani. (The latter two were early targets of the late 1950s Project Ozma — the first attempt to detect radio transmissions from extraterrestrial civilizations.)

Over the last 30 years Guinan and Engle and their students have observed a variety of stellar types. Based on their studies, the researchers have determined relationships among stellar age, rotation rate, X-ray-UV emissions and flare activity. These data have been utilized to investigate the effects of high-energy radiation on planet atmospheres and possible life.

The results are being presented at the 235th meeting of the American Astronomical Society in Honolulu, Hawaii.

For illustrations and more information about this study and Hubble, visit: