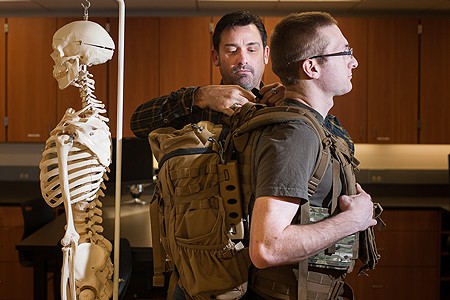 A member of Gonzaga’s School of Nursing and Human Physiology faculty, Higginson is working with Mystery Ranch, a backpack manufacturer based in Bozeman, Montana, to improve backpack and body armor system designs – allowing troops and SWAT team members to better protect themselves when under fire.

Higginson, a former member of the U.S. military’s special-operations force, is an expert in how backpack loads impair shooting performance. His research combines biomechanics and ergonomics to design backpacks and body armor systems that improve safety by enabling movement. A former competitive biathlete, his work also involves the physiological and biomechanical predictors of shooting performance – factors that have been used to benefit the performance of biathletes and Olympic position shooters.

As the research by Higginson shows, design changes to backpacks and armor can saves lives in combat situations. Higginson, who defused bombs for the U.S. military in the Gulf War, is intimately familiar with battlefield dangers.

Special forces troops are routinely asked to be self-sufficient in the field for up to two weeks, meaning they must carry ample gear, food, and ammunition – all on top of special protective body armor that adds even more bulk and weight. The loads can significantly impair the ability of soldiers to protect themselves.

“On the battlefield, one-quarter of one second can mean the difference between life or death,” said Higginson who earned a Ph.D. in biomechanics and statistics from Oregon State University and a master’s of science in exercise physiology from Montana State University. “We’re trying to optimize load carriage configurations to maximize performance and survivability in the field.”

Higginson’s most recent research project involved an evaluation of a prototype quick-release body armor system. One tug on a cord causes a soldier’s entire body armor system to fall away. The design is among the first to incorporate a waist belt that transfers most of the body armor weight to the waist. Other body armor systems put the entire load on the shoulders, Higginson said. “This system was developed to help troops and law enforcement survive time-critical emergency situations – such as underwater submersions and vehicle rollovers involving fire – when they are most vulnerable and least able to defend themselves,” he said.

Higginson’s current research, funded by the Montana Overland Research Foundation, incorporates previous research he conducted for the foundation and a 2013 proposal he developed for the U.S. Special Operations Command. The research aims to quantify the motion of backpacks worn over body armor to determine the impact on shooting effectiveness. The tests also measure the impact on shooting effectiveness of using (and not using) an aftermarket system designed to support and stabilize the load.

Rich Undergraduate Research Opportunities Higginson’s work has also provided extraordinary research opportunities for Patrick Lindecker, a senior human physiology major from Volcano, California. Lindecker, who came to Gonzaga to study pre-medicine, changed his major to human physiology when he discovered the quality of Gonzaga’s program. Lindecker has collaborated with Higginson on several scholarly publications, and will graduate in May with the kind of research experience usually reserved for graduate students. “When I came here, I didn’t know Gonzaga had this specialized program in human physiology,” said Lindecker, who plans to pursue a doctorate in exercise physiology, conduct more research, and eventually teach at a university. “I am applying to grad schools now. I enjoy research and might present some of this research at a conference this summer.”