Gov. Inslee to Gonzaga Students: Journalism More Important than Ever for American Democracy 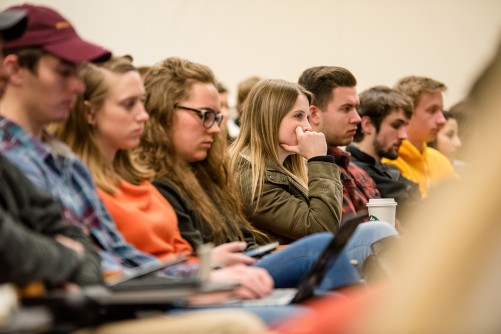 Gonzaga journalism students listen to Gov. Inslee and the other members of the panel in Instructor Tracy Simmons’ class. 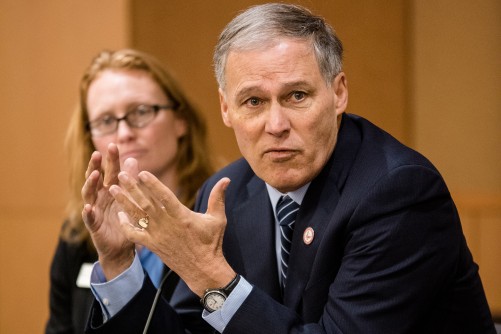 “There’s never been a time in our nation’s history where journalism and journalism schools are more important,” Inslee told students and faculty in a class taught by Instructor Tracy Simmons. “Never in our lifetime, my lifetime certainly, has the profession of journalism been more pivotal, more important and more threatened frankly because of the economics of the media today.”

Speaking as part of a panel to help students learn more about covering divisive and culturally complex issues, Inslee called the freedoms of speech and religion two central tenets of American democracy.

“I have seen the degradation of the common set of common facts, which are the foundation for a legitimate debate in American society, and that is very much at risk right now,” the Democrat said. “Because of what is happening in the media and the internet and everywhere else, we are no longer sharing a common set of facts.”

While diversity of opinion and political views are expected, and encouraged, Inslee said our inability to have a “common debate around a common reality, it reduces the effectiveness of democracy.”The other panel members were Gloria Ochoa-Bruck, a member of the state’s Commission on Hispanic Affairs, and director of local government and multi-cultural affairs for the city of Spokane; Admir Rasic, a Spokane Muslim who was born in Bosnia-Herzegovina and lived with his family in Germany as war refugees before moving to Spokane in 2000; Father Jim Voiss, S.J., Gonzaga assistant vice president of mission and ministry and rector of the Jesuit community; and Dr. Hershel Zellman, a retired physician and active member of Spokane’s Jewish community.

Rasic told the students his biggest hope is that his daughter, who was born in Spokane, will grow up without prejudice based on her religion, ethnicity or the fact that her parents are immigrants.

“As a Muslim, what I recognize especially in the media is the normalization to marginalize the Muslims. What we don’t see very often are stories about American Muslims in the media, people like me,” said Rasic, who encouraged the students to avoid settling for simple narratives that perpetuate prejudice and stereotypes.

In addition, he urged the students to take time to form relationships with people of other cultures.

“It’s so much harder to hold prejudices or hate another group if you get to know them better,” he said, noting that doing so will help them understand “hey, there are people out here with different types of beliefs working together to make our country a better place.”

Zellman serves as chair of the committee that presents the Spokane observance of the Holocaust.

“I would like to make the point that truth that isn’t spoken can be just as bad as lies that are spoken,” Zellman said. “Last Saturday was the International Day of Remembrance of the Holocaust and the White House came out with a statement that somehow totally avoided using the word Jew or Jewish. What are we supposed to get from that? Were the Jews not involved? Come on, give me a break. I think that’s all that I want to say for right now. But as journalists I think that is important.”

Ochoa-Bruck advised the aspiring journalists to understand the power of words.

“Educate yourself and learn what terms mean,” she said. “When journalists print ‘illegal alien’ versus ‘undocumented person’ that’s very dehumanizing. These are people. You’re speaking to people, like me.”

Fr. Voiss shared a Catholic Mass Scripture reading for the day that speaks to the issues being discussed. The reading was from Hebrews 13:

“Do not neglect hospitality,for through it some have unknowingly entertained angels.Be mindful of prisoners as if sharing their imprisonment,and of the ill-treated as of yourselves,for you also are in the body.”The passage expresses concern for the foreigner, and those lacking the social resources to protect themselves, he said.

“It speaks to a sensibility that was very much a part of the founding inspiration of this country,” he said. “This is a part of an ethos, a sense of right and wrong that has permeated our culture, our society, since its inception and yet is very much threatened in our current climate.”

Voiss also urged the students to take great care in their use of language.