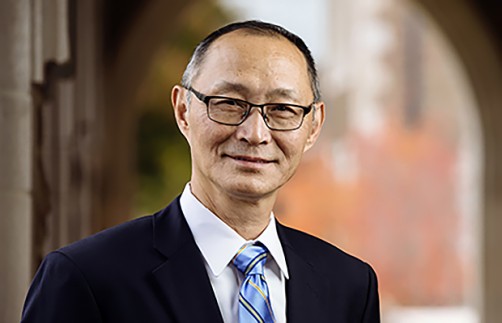 Newswise — Shenyang Guo, the Frank J. Bruno Distinguished Professor of Social Work Research at the Brown School and assistant vice chancellor for international affairs – Greater China at Washington University in St. Louis, has been named a Yangtze River Scholar by the Ministry of Education of the People’s Republic of China.

The prestigious award is the highest award issued to an individual in higher education by the country’s Ministry of Education. In addition to China’s top scholars, the ministry also selects several international recipients each year.

This marks the third person affiliated with Washington University to have received the honor.

Guy Genin, professor of mechanical engineering and materials science in the School of Engineering & Applied Science, was named a scholar in 2015. Pang Xun, who earned a doctorate in political science from the university in 2010 and is currently professor of international relations at Tsinghua University in China, was awarded a Yangtze River Scholar in the Young Scholar category this year.

The China Ministry of Education announced the 2016 Yangtze River Scholars on April 2, 2017. Guo received his award at that time.

“I am thrilled that Shenyang Guo has been selected to be a Yangtze River Scholar,” said Chancellor Mark S. Wrighton.

“Shenyang’s leadership in working with students and scholars at our partner universities in China has expanded and enhanced collaboration with those institutions and helped nurture numerous global leaders. This new distinction is significant and will strengthen our relationship with  Xi’an Jiaotong University. I am very proud of his accomplishments.”

As a Yangtze River scholar, Guo will receive significant research funds from the Chinese Ministry of Education to conduct research projects in both sociology and social work and to collaborate with scholars from Xi’an Jiaotong University.

“I am very excited and hope that my work will further strengthen our collaborations with China partner universities,” Guo said. “Being a Yangtze River Scholar at Xi’an Jiaotong University is a great honor. It not only helps my personal research projects in China, but also helps our university, in my role as the assistant vice chancellor for international affairs – Greater China, to develop new, collaborative relations in that country.”

Xi’an Jiaotong University is a C-9 League university with special strengths in energy, materials and public health. Founded in Shanghai in 1896 as the Nanyang Public College, Xi’an Jiaotong University is one of the oldest institutions of higher learning in China. It is a comprehensive research-oriented university focusing on science and engineering.
Its faculty includes 16 members of the Chinese Academy of Science and the Chinese Academy of Engineering, as well as members of the American Academy of Engineering, the British Royal Academy and the Third-World Academy of Science.

In addition, Guo serves on the editorial board of Social Service Review and as a frequent guest reviewer for journals seeking a critique of advanced methodological analyses.