Harmless Virus May Aid in Knocking Out Deadly Bird Flu 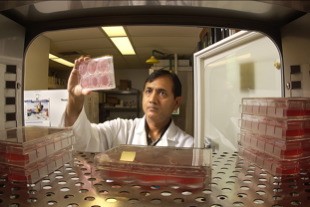 Current vaccines against human cases of bird flu, or avian influenza, are effective only against specific strains of these illnesses. Purdue University molecular virologist Suresh Mittal and collaborators are investigating using a harmless virus, called an adenovirus, as a delivery vehicle to develop vaccines that will continue to provide protection as influenza strains mutate.

STORY AND PHOTO CAN BE FOUND AT:http://news.uns.purdue.edu/UNS/html4ever/2005/050912.Mittal.birdflu.html

Newswise — A harmless virus used as a delivery vehicle may help set a roadblock for a potentially catastrophic human outbreak of bird flu, according to researchers at Purdue University and the Centers for Disease Control and Prevention (CDC).

Purdue molecular virologist Suresh Mittal and his collaborators are investigating a new way to provide immunity against avian influenza viruses, or bird flu, the most lethal of which, H5N1, has a 50 percent fatality rate in humans. Under a $1.6 million grant from the National Institute of Allergy and Infectious Diseases (NIAID), the researchers are focusing on using a harmless virus, called adenovirus, as a transmitting agent for a vaccine to fight off highly virulent strains of the avian influenza viruses.

Current vaccines are designed for strains of flu found in local areas and are effective only as long as the virus doesn't change form. Existing vaccines will have limited success against new strains of avian influenza, he said. Every time a bird flu mutates, vaccines must be redesigned.

An additional important advantage to using an adenovirus as a vector, or transporter of vaccine into cells, is that is could be mass produced much more quickly than with current methods.

"Our approach is to use an adenovirus to deliver some components of the bird flu virus in a vaccine formulation," Mittal said. "We already know how to grow large amounts of adenovirus and how to purify it because adenoviruses already are used in clinical trials for gene therapy as vectors."

Mittal and collaborators Harm HogenEsch, co-principal investigator and head of Purdue's Department of Veterinary Pathobiology, and Jacqueline Katz and Suryaprakash Sambhara, both co-investigators from the CDC, are focused on creating better protection against the constantly mutating avian influenza viruses.

"The ultimate goal of our research is to develop an effective avian influenza virus vaccine that will provide long-lasting and broad immunity against multiple strains of this virus," Mittal said.

The proteins that form the basis for all of today's flu vaccines are grown in fertilized chicken eggs. It takes months to produce a new vaccine for a new virus strain using this method and limits vaccine supplies due to shortages in eggs for the purpose. The egg production method also creates difficulty in redesigning vaccine to keep pace with virus mutations.

"Do we still want to depend on the egg to make our flu vaccines?" Mittal said. "When these types of viruses strike humans, they also strike poultry. In that case, the availability of fertilized eggs to make enough vaccine will be compromised."

Even with a recently developed vaccine based on growing a single protein of H5N1, it would be difficult to rapidly produce enough protective medication to stem a pandemic, according to experts from the CDC, World Health Organization and NIAID. However, a large quantity of an adenovirus-based vaccine could easily be produced on short notice, Mittal said.

A "medium-level" bird flu pandemic in the United States would kill between 90,000 and 200,000 people with another 20 million to 47 million more sickened, CDC experts estimate. The economic impact on the United States alone would be between $71.3 billion and $166.5 billion.

Influenza viruses are respiratory pathogens responsible for widespread infections in humans, a variety of birds, marine mammals, pigs and horses. In Southeast Asia, millions of poultry have died or been euthanized because of H5N1 avian influenza.

Before the human cases of H5N1, there were no known cases of bird-to-human transmission that led to significant disease, Mittal said. However, this type of flu already has passed from poultry to people who had direct contact with ill birds or contact with contaminated bird feces, saliva or nasal mucous. A few cases have been documented of human-to-human infection, according to the World Health Organization.

In addition, migratory waterfowl at China's Qinghai Lake Nature Reserve have succumbed to H5N1. While migratory birds often can pass avian influenza to other animals, they generally don't become ill. Scientists from the U.S. Geological Survey National Wildlife Health Center believe this is further evidence that H5N1 could trigger a human flu pandemic. No cases of this type of bird flu have been found in the United States.

Since 2003 about 60 people have died in Southeast Asia from H5N1, about half of those afflicted. Outbreaks of H5N1 in birds have been confirmed in 11 countries, and the disease is spreading north into countries outside of Southeast Asia and already has been reported in Russia. The disease's spread, occurrences of other bird flu types and the already confirmed human cases, provide added impetus for finding more effective vaccine protection, Mittal said. The CDC reported two human cases of another bird flu in the United States in recent years - H7N2 in Virginia in 2002 and in New York in November 2003.

Viruses are classified according to the combination of two types of proteins found on the virus cell surface. The 15 types of hemagglutinin (H) protein and nine types of neuraminidase (N) protein form a large number of influenza viruses for which birds are the natural hosts.

New, often more dangerous, flu strains develop when the H and N combinations change. When the genes of a human or swine influenza mix with an avian variety, a highly pathogenic human flu likely will result, Mittal said.

These virus alterations work a bit like a jigsaw puzzle: As two viruses grow in the same animal, they replicate and reassemble their genome. If one virus takes a piece of genome from the other virus to fill an empty spot, then a new virus is born.

The potential for a pandemic exists when one of these new viruses is introduced into the human population. People with no previous exposure to this new flu strain have little or no immunity, making them highly susceptible to a virus that now can easily spread from person to person.

Scientists believe that without the right vaccines and preparation, H5N1 has the potential to be one of the deadliest flu outbreaks if it mutates to easy human-to-human transmission. This flu strain was first identified in South Africa in 1961, with the first bird-to-human case recorded in 1997.

"Many people believe that this virus will mutate and become more widespread," Mittal said. "The question is when? Are we prepared? We hope that successful completion of this project will result in development of an adenovirus-based vaccine effective against pathogenic avian influenza viruses."

HogenEsch and Mittal are both members of the Center for Comparative Medicine, a collaboration of Purdue's College Agriculture, School of Veterinary Medicine and the Indiana University Medical School. The center researches animal and human diseases to find new treatments and cures.

Current vaccines against human cases of bird flu, or avian influenza, are effective only against specific strains of these illnesses. Purdue University molecular virologist Suresh Mittal and collaborators are investigating using a harmless virus, called an adenovirus, as a delivery vehicle to develop vaccines that will continue to provide protection as influenza strains mutate. (Purdue Agricultural Communication photo/Tom Campbell)

A publication-quality photo is available at http://news.uns.purdue.edu/images/+2005/mittal-birdflu.jpg