20-May-2014 8:00 AM EDT, by Massachusetts Eye and Ear contact patient services
favorite_border 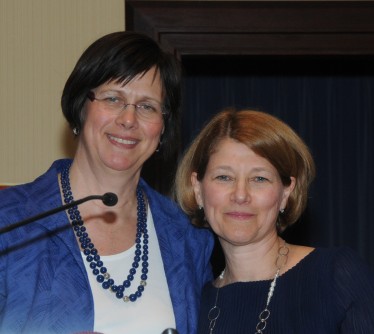 Newswise — BOSTON (May 20, 2014) – Two prominent faculty members of the Harvard Medical School Department of Ophthalmology and Massachusetts Eye and Ear/Schepens Eye Research Institute were selected to receive prestigious 2015 achievement awards from The Association for Research in Vision and Ophthalmology (ARVO). These honors were announced during the ARVO 2014 Annual Meeting held May 4 through 8 in Orlando, Florida.

Patricia D’Amore, Ph.D., M.B.A., F.A.R.V.O., is the recipient of the 2015 Proctor Medal, honoring her outstanding research contributions to ophthalmology. Established in 1949, The Proctor Medal is named for Dr. Francis I. Proctor, an ophthalmologist who conducted extensive research on the etiology and treatment of trachoma. This prestigious award honors outstanding research in the basic or clinical sciences as applied to ophthalmology. This was the first ophthalmology-related award to recognize basic scientists in the field.

“ARVO is honored to have Dr. D’Amore, as the recipient of the 2015 Proctor Medal. Her outstanding research on vascular growth and development throughout her career will continue the tradition of superb and highly deserving Proctor Medal recipients. We will all look forward to her presentation at the ARVO 2015 annual meeting,” said William Mieler, M.D., F.A.R.V.O., President of ARVO.

“Dr. Miller's leading-edge research on ocular angiogenesis has changed the lives of vision impaired persons across the globe. She is most deserving of this very important ARVO Achievement Award,” said Justine Smith, Ph.D., F.R.A.N.Z.C.O., F.A.R.V.O., Immediate Past President of ARVO.

Dr. D'Amore is the Director of Research at Schepens Eye Research Institute, as well as the Charles L. Schepens Professor of Ophthalmology and Professor of Pathology at Harvard Medical School. An internationally recognized expert in the field of angiogenesis, Dr. D'Amore will present the Proctor Award Lecture at the ARVO 2015 Annual Meeting in Denver Colorado, at which time she will receive the Proctor Medal. The Proctor Lecture will also be published in the journal Investigative Ophthalmology & Visual Science.

Drs. D’Amore and Miller have been at the forefront of angiogenesis and vision research for over three decades. Together, they have made numerous seminal discoveries in the field of ophthalmology — forming new paradigms in basic science and successfully translating groundbreaking discoveries into the most compelling benefits of anti-angiogenic therapy. Their foremost transformative contributions include the identification of vascular endothelial growth factor (VEGF) as the elusive “Factor X” that causes pathological blood vessel growth in blinding neovascular eye diseases. These investigations formed the scientific foundations of anti-VEGF therapies, which were first approved for clinical use in 2004 and currently used to treat various cancers and intraocular vascular diseases such as diabetic retinopathy and age-related macular degeneration (AMD). The impact of their research has been extraordinary: more than 500,000 ophthalmic patients in the U.S. and over 1 million worldwide are treated annually with all anti-VEGF agents combined, and it is estimated that two years of anti-VEGF treatment for neovascular AMD reduces visual impairment by 37% and legal blindness by 72%.

Dr. D’Amore and Dr. Miller have made additional notable contributions to the field of ophthalmology. Around the time of the VEGF research, Dr. D’Amore also developed a widely used mouse model of oxygen-induced retinopathy that has served as the cornerstone of many basic scientific and preclinical studies of vascular development and disease. More recently, Dr. D’Amore’s studies have also uncovered important physiological roles of vascular growth factors — yielding crucial insight into the safe use of antiangiogenic therapies. Ongoing investigations are elucidating the molecular regulation of inflammation at the cellular level and the role of immune responses in the pathogenesis of AMD. While performing the preclinical research for ocular anti-VEGF therapies, Dr. Miller also developed a pharmacological breakthrough for patients with neovascular AMD: photodynamic therapy (PDT) with verteporfin (Visudyne®). Verteporfin, a light-sensitive dye, is injected systemically, and a laser specifically activates the drug in the choroidal vessels, which blocks vessel leakage and prevents further vessel growth. In 2000, Visudyne® became the first drug approved by federal agencies for treating AMD, laying the groundwork for the pharmacological treatment of neovascular retinal disease. Dr. Miller continues investigations to elucidate the pathophysiology of vision loss and improve therapies for retinal diseases.

About Massachusetts Eye and Ear Mass. Eye and Ear clinicians and scientists are driven by a mission to find cures for blindness, deafness and diseases of the head and neck. Led by the Eaton-Peabody Laboratory in Otology, the Howe Laboratory in Ophthalmology, the Berman-Gund Laboratory for the Study of Retinal Degenerations, and Schepens Eye Research Institute, Mass. Eye and Ear in Boston is the world's largest vision and hearing research center, offering hope and healing to patients everywhere through discovery and innovation. Mass. Eye and Ear is a Harvard Medical School teaching hospital and trains future medical leaders in ophthalmology and otolaryngology, through residency as well as clinical and research fellowships. Internationally acclaimed since its founding in 1824, Mass. Eye and Ear employs full-time, board-certified physicians who offer high-quality and affordable specialty care that ranges from the routine to the very complex. U.S. News & World Report’s “Best Hospitals Survey” has consistently ranked the Mass. Eye and Ear Departments of Otolaryngology and Ophthalmology as among the top hospitals in the nation.

About ARVOARVO is the largest and most respected eye and vision research organization in the world. Its members include more than 12,750 researchers from over 80 countries. ARVO encourages and assists research, training, publication and knowledge-sharing in vision and ophthalmology. ####