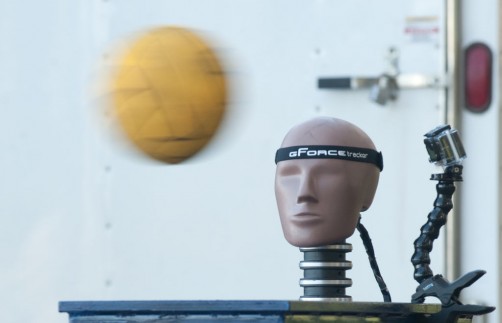 As part of the concussion study, UCI engineering students shot water polo balls at a crash-test dummy head to assess the impact of blows at various speeds and levels of inflation.

Newswise — As a result of ongoing probes into the short- and long-term effects of concussions in football, other sports are looking into whether additional steps can be taken to protect their athletes. Among them is water polo, and a novel research venture that includes UC Irvine scientists, coaches and athletes is helping.

The effort got rolling when James Hicks – a scientist, avid fan and father of three sons who played the sport – searched an NCAA database for concussion information related to water polo. But his inquiry came up empty.

“There was none,” says Hicks, professor of ecology & evolutionary biology at UC Irvine. “And given UCI’s historic place in the sport and the collaborative mission of the university, it became clear that we should take on this issue.”

Hicks’ research focuses on evolutionary physiology. While he’s best known in science circles for his work on alligator cardiovascular systems, he also directs UCI’s innovative Exercise Medicine & Sport Sciences Initiative, which unites an interdisciplinary cadre who share an interest in physical activity and its relationship to health. And he’s drawing on their expertise – with the assistance of USA Water Polo, the national governing body for the sport – to compile the first real data set on head impact injuries and concussions in water polo.

“Jim is the first in the world to look into these deeper issues in water polo, and it’s great,” says Dan Klatt, UCI women’s water polo head coach. “Our sport is a physical one, and we need to ask whether concussions are a real problem in the sport and if we’re using the proper equipment to protect our athletes. This study takes a giant step forward in order to answer that question.”

Although head injuries and concussions do happen in water polo, information about their prevalence is, so far, primarily anecdotal. Hicks and his collaborators aim to provide a factual basis for considering whether such injuries are sufficiently common that they need to be addressed and, if so, how best to do this.

“It’s a hard sport,” Hicks says. “Head butts, elbows, shoulders – and at the highest levels, players throw the ball as fast as 50 miles an hour at short distances. Goalies appear to be most at risk, but we want to obtain scientific data to assess that risk, as well as seeing what other positions in the pool may be prone to concussion injury.”

The study has three components. In one, Dr. Steven Small, professor and chair of neurology at UCI, and Robert Blumenfeld, assistant adjunct professor of neurology at UCI, will oversee an email survey of water polo players, who will be asked a number of questions about how long they’ve been in the sport, what positions they’ve played, and the number of serious head blows they’ve received. USA Water Polo will assist in the survey by inviting its 40,000 members to participate.

In the second project – now almost done – UCI engineering students shot water polo balls at a National Highway Traffic Safety Administration-certified crash-test dummy head to gauge the impact of blows at various speeds and levels of inflation. In addition, they measured the effectiveness of protective headgear. The results are currently being analyzed.

In the third component, Hicks will outfit UCI men’s and women’s water polo players with small G-force monitors incorporated into standard water polo caps to record the intensity of head impacts. “It’s challenging to understand what’s going on in the game, and the monitors will help,” he says.

The long-term goal is to broaden the study and outfit more college, high school and age-group teams with these devices. Several local water polo programs have expressed interest in the headgear monitoring, and Hicks is scheduled to give a presentation on it at Harvard-Westlake School in Los Angeles.

He notes that this is a particularly opportune time for the study, given water polo’s recent growth in popularity. According to Christopher Ramsey, CEO of USA Water Polo, participation is increasing dramatically, especially among women. Water polo is the fastest-growing sport in California high schools, and the NCAA administers an expanding number of men’s and women’s varsity teams across the nation. It’s a sport on the rise.

According to Klatt, the mecca of water polo is here in Orange County, where highly competitive high schools and club teams produce a steady stream of the world’s top talent. USA Water Polo is based in Huntington Beach, and the men’s and women’s national teams practice at Santa Ana’s Segerstrom High School and at the organization’s training center in Los Alamitos, respectively.

“This is a great opportunity for a national governing body to assist a world-class university in groundbreaking research,” says USA Water Polo’s Ramsey. “Universities in the U.S. have a distinctive role with sport, and because there’s a close relationship between USA Water Polo and UCI, we start with a stronger bond to work on an issue like this. We both bring valuable perspectives to this enterprise.”

The crash-test dummy exercise is already providing some interesting – if preliminary – results. While Hicks stresses that more analysis is needed, he says the data indicates that ball inflation does matter, with less-inflated, softer balls absorbing more energy upon impact.

In addition, newly developed silicon-based protective headgear – the kind not approved for NCAA play – appears to reduce impact forces by as much as 25 percent. However, Hicks points out, the precise relationship between head impacts and concussion rates requires more study, both in the lab and in the pool.

“I love science, and I’m a fan of the game, and I want to see what we can do for water polo,” Hicks says. “This is exciting stuff.”