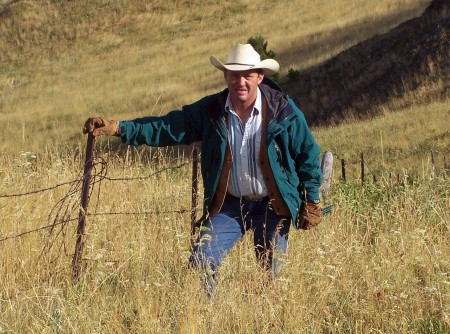 Derek Bailey, professor in the New Mexico State University Department of Animal and Range Sciences, was awarded a Fulbright Senior Scholarship to conduct collaborative research in Australia. The research will focus on precision livestock management and will investigate the potential for real-time tracking to identify disease and other cattle and sheep welfare concerns.

Newswise — Ranchers in the western United States and in Australia face a major challenge: animal welfare on a substantial amount of rangeland.

On vast rangeland, livestock is difficult and expensive to manage. But Derek Bailey, professor in the New Mexico State University Department of Animal and Range Sciences, is working to find ways to help such ranchers better manage their livestock and improve animal welfare.

His efforts include collaborating with researchers in Australia, where the rangeland is similar to that in New Mexico and other western states. Bailey will further his research at Central Queensland University in Rockhampton with the help of the prestigious Fulbright Senior Scholarship he was recently awarded.

“On rangelands in New Mexico, in the western United States and in most of Australia, ranchers have extensive pastures on which they can’t see the livestock all the time,” Bailey said. “The cows have to free roam out in the range, so you can’t watch them; it’s not like a dairy where you see the cows every day. Because of that, you can’t always tell if the animals get sick or have trouble with parturition.”

His Fulbright to Australia from early February to late June will allow him to work with Mark Trotter, associate professor of precision agriculture at Central Queensland University, and others to identify methods to track cattle and sheep on rangeland. Specifically, Bailey will be learning in more detail about a type of GPS tracking used to identify animal behaviors and to determine whether an animal needs assistance.

“One of the cool things about going to Australia is that they’re very close to having real-time or near real-time tracking of livestock,” Bailey said. “We’re trying to use technology to see if we can identify behaviors that would be indicative of welfare issues. We’re hoping to be able to see that, with their movement data from GPS tracking and perhaps other sensors.”

The GPS device would be affixed to a collar that would send a signal to a nearby tower, potentially up to 10 miles away from the animal. That data would be collected and transferred to the ranch headquarters. Ideally, the information would be sent via the internet to a smartphone application.

Bailey’s and Trotter’s research efforts are complementary. Bailey has plenty of rangeland cattle grazing behavior experience as the director of NMSU’s 61,000-acre Chihuahuan Desert Rangeland Research Center located north of Las Cruces. In Australia, Trotter is knowledgeable in precision livestock agriculture, which is using technology to monitor cattle and sheep.

There’s another part to Bailey’s visit. He’ll ask Australian researchers to help analyze spatial data he’s collected on the movement and behavior of cattle on rangeland. He hopes to find a way to help improve grazing distribution of livestock. Right now, too many animals forage near water. As a result, much of the forage areas on higher land or on hills goes untouched.

“We’re trying to use genetic selection to improve grazing distribution to get cattle to graze up steeper hillsides to go further from water,” Bailey said. “Our ongoing research has been very encouraging so far, we just need to validate it. Our approach is to use genetic markers to predict where cattle will graze.”

For example, DNA from a blood sample may show that a certain animal would be more likely to climb hills or travel farther.

“When we go to Australia, it gives me a chance to help work with others to be able to analyze and make more sense of this huge amount of tracking data that we’re collecting,” he said.

Bailey said he believes the combination of the real-time animal welfare tracking technology and the genetics of grazing distribution helped him receive the Fulbright scholarship.

“I think we’re really onto some cutting-edge research,” he said. “It’s a combination of high-tech solutions for real-life ranch problems both in Australia and here.”

Although this won’t be his first time traveling to Australia to collaborate with colleagues, this is the first time he’s been awarded a Fulbright. The mission of the Australian-American Fulbright Commission is to promote education and cultural exchange between Australia and the United States in order to enhance mutual understanding and strengthen relations between the two countries.

During his stay, Bailey will travel throughout the country representing the United States and will talk to other Fulbright scholars. He’ll attend a dinner with the Australian Parliament, where a poster for his research will be on display. He may even get to meet Prime Minister Malcolm Turnbull.

“I’ll be able to talk about the research, about New Mexico State and about the State of New Mexico,” he said. “It’s all really science-driven, and we’re trying to do many things to help out ranchers in New Mexico and in the West.

“This will also allow me to expand my chances for securing funding here in the U.S. Welfare issues are an even bigger deal now, and as tight as budgets are, broadening my ability to address proposal requests is a good thing.”