This sequence begins with a wide-field optical image from Kitt Peak of M33, a spiral galaxy about 3 million light years from Earth, and then zooms into a view from the Gemini telescope on Mauna Kea, Hawaii. Next, the view zooms into an even smaller field, from the Hubble Space Telescope, that includes M33 X-7, the most massive known black hole to be formed from the collapse of a star. The final image is a composite of the region around M33 X-7 that contains both the Chandra and Hubble data. 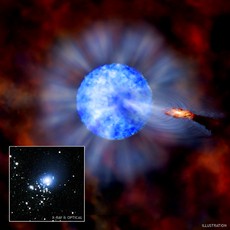 This artist's rendering shows a large blue star that is locked into orbit around a black hole. Material from the star is being pulled into a disk that revolves around the black hole at the center orange disk. X-rays from Chandra and optical data from the Gemini telescope (inset) help determine that this black hole is almost 16 times the mass of the Sun. This is the highest mass ever precisely determined for a black hole of this category. Data have also revealed that the companion star has an unusual size, containing over 70 times the Sun's mass.

Newswise — Astronomers have located an exceptionally massive black hole in orbit around a huge companion star. This result has intriguing implications for the evolution and ultimate fate of massive stars.

The black hole is part of a binary system in M33, a nearby galaxy about 3 million light years from Earth. By combining data from NASA's Chandra X-ray Observatory and the Gemini telescope on Mauna Kea, Hawaii, the mass of the black hole, known as M33 X-7, was determined to be 15.7 times that of the Sun. This makes M33 X-7 the most massive stellar black hole known. A stellar black hole is formed from the collapse of the core of a massive star at the end of its life.

"This discovery raises all sorts of questions about how such a big black hole could have been formed," said Jerome Orosz of San Diego State University, lead author of the paper appearing in the October 18th issue of the journal Nature.

"This is a huge star that is partnered with a huge black hole," said coauthor Jeffrey McClintock of the Harvard-Smithsonian Center for Astrophysics in Cambridge, Mass. "Eventually, the companion will also go supernova and then we'll have a pair of black holes."

The properties of the M33 X-7 binary system " a massive black hole in a close orbit around a massive companion star " are difficult to explain using conventional models for the evolution of massive stars. The parent star for the black hole must have had a mass greater than the existing companion in order to have formed a black hole before the companion star.

Such a massive star would have had a radius larger than the present separation between the stars, so the stars must have been brought closer while sharing a common outer atmosphere. This process typically results in a large amount of mass being lost from the system, so much that the parent star should not have been able to form a 15.7 solar-mass black hole.

The black hole's progenitor must have shed gas at a rate about 10 times less than predicted by models before it exploded. If even more massive stars also lose very little material, it could explain the incredibly luminous supernova seen recently as SN 2006gy. The progenitor for SN 2006gy is thought to have been about 150 times the mass of the Sun when it exploded.

"Massive stars can be much less extravagant than people think by hanging onto a lot more of their mass toward the end of their lives," said Orosz. "This can have a big effect on the black holes that these stellar time-bombs make."

Coauthor Wolfgang Pietsch was also the lead author of an article in the Astrophysical Journal that used Chandra observations to report that M33 X-7 is the first black hole in a binary system observed to undergo eclipses. The eclipsing nature enables unusually accurate estimates for the mass of the black hole and its companion.

"Because it's eclipsing and because it has such extreme properties, this black hole is an incredible test-bed for studying astrophysics," said Pietsch.

NASA's Marshall Space Flight Center, Huntsville, Ala., manages the Chandra program for the agency's Science Mission Directorate. The Smithsonian Astrophysical Observatory controls science and flight operations from the Chandra X-ray Center in Cambridge, Mass. Gemini is an international partnership managed by the Association of Universities for Research in Astronomy under a cooperative agreement with the National Science Foundation.