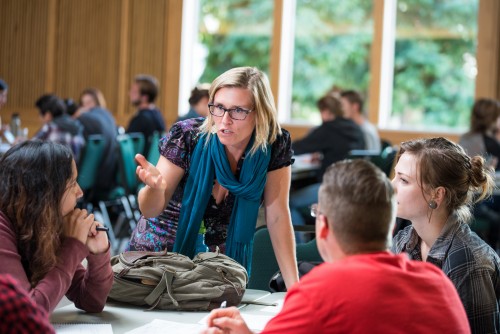 Newswise — Oceans are warming, ice caps are melting, and sea levels are rising.

The scope of the devastation leaves many students in HSU’s Environmental Studies (ES) program feeling more than distressed. It sends them into cycles of “eco-depression” that disrupt their ability to learn and professors’ ability to teach

But rather than ignore their despair, ES Professor Sarah Ray has embraced it by identifying the emotional arc and adjusting her teaching methods to help students cope with their feelings.

“I have decided to look at emotions straight in the face and devote myself to dealing with it by making emotions central to the pedagogy,” she says.

Those emotions, she says, resemble the stages of grief and follow students from their freshman to senior years. And it begins with idealism.

As freshmen, students enter the ES program believing they can make a difference. They expect the program will teach them about how to fix problems of the world.

By their sophomore year, they dig deeper into the politics and privilege behind environmental issues, such as the way visitors enjoy national parks while ignoring the genocide of Native Americans who once lived on those lands.

“Not only do they learn about the scale of devastation but also learn that their efforts cannot address these challenges,” Ray says. “They become pessimistic about the ability of existing institutions and systems to act in anything but the short-term interests of capitalist growth.”

Exploring environmentalism through a social justice lens often triggers the second stage—a combination of shame, denial, guilt, and apathy that Ray first noticed when she began teaching at HSU in 2013—followed by “eco-nihilism,” a third stage she found particularly frustrating.

“During one in-class exercise, my students believed that everything I was telling them would not bring about social change,” she recalls. “It was a completely extreme rejection of the exercise.”

In other words, the emotional demands of her students overshadowed class. “We couldn’t even get to the content because we would spend the time talking about how they feel,” says Ray, who spent office hours and personal time helping students process their emotions. Their angst took a toll on her professionally and personally.

To help her students overcome their affective hurdles, Ray has turned to teaching emotional resiliency. She asks students to examine the political agendas behind doom and gloom narratives that leave them feeling powerless and explore what counts as social change, and she assigns readings focused on success stories that illustrate resiliency in the long haul. These lessons instill optimism (the fourth stage of eco-grief) and the realization that change is a lifelong process.

That brings students to the final phase: action through volunteer work, which Ray built into the curriculum last semester. As part of their culminating experience, ES seniors performed community service—doing everything from leading an environmental art class at a local middle school to growing organic foods in a community garden.

They later examined how their work impacted the community and themselves. The point of their service-learning projects was to show students they can be agents of change and make small but meaningful differences.

“I want to send students into the world with confidence in their skills, a critical hope, a broad idea of how social change works, and some sense of how they will join in those efforts,” says Ray.