Bump in collider data: a siren song or new particle? 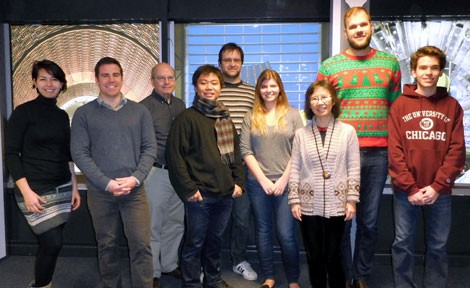 ATLAS group members include UChicago faculty David Miller, Bruce Pilcher, and Young-Kee Kim along with a number of graduate students and postdocs, shown here during a visit to the Large Hadron Collider at CERN. 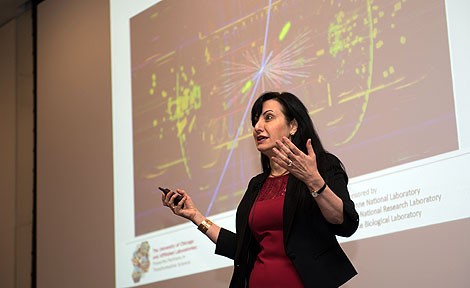 Prof. Marcela Carena, head of theoretical physics at Fermilab, is one of several UChicago scholars doing research on the Higgs boson. 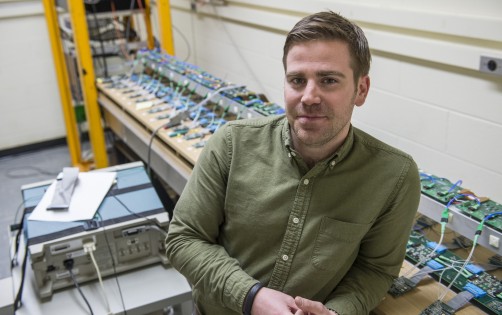 David Miller, assistant professor in physics, works on electronics that will bring new capabilities to the trigger system of the ATLAS detector. 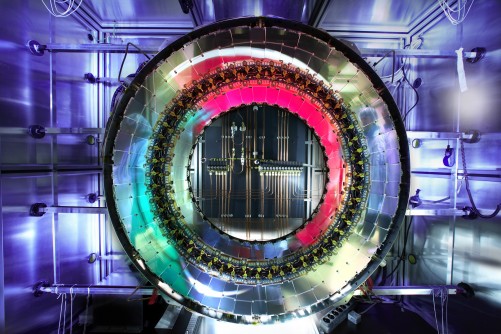 The Large Hadron Collider began taking data in June 2015 for the first time in two years. After a shutdown this winter, the LHC started colliding protons, allowing researchers to continue their follow-up studies.

Newswise — Odysseus had to resist the bewitching song of the Sirens that lured unsuspecting sailors to the rocks in Homer’s epic The Odyssey. High-energy physicists working at the Large Hadron Collider in Geneva, Switzerland have their own bewitching siren song these days. They call it the 750 GeV bump: It could signal the existence of a new heavy particle—or it could be nothing.

“I cannot get too excited yet,” says Mark Oreglia, professor in physics at the University of Chicago. “It could be angry statistics.”

Oreglia and his colleagues expect LHC’s current run to provide enough data by summer’s end to statistically confirm or deny the feature at 750 gigaelectron volts. An eagerly awaited update about this mysterious bump will be discussed during the International Conference on High Energy Physics, which will meet in Chicago from Aug. 3-10.

“We will, of course, follow up on many other important questions in parallel,” notes David Miller, assistant professor of physics at UChicago.

Oreglia and Miller are two of the six faculty members leading UChicago’s ATLAS group, consisting of 27 collaborators who conduct research with the world’s most powerful particle accelerator. LHC’s four experiments, including ATLAS, began taking data in June 2015 for the first time in two years. After a shutdown this winter, the LHC started colliding protons, allowing researchers to continue their follow-up studies to the landmark 2012 discovery of the Higgs boson.

The Higgs discovery indicated the existence of a new type of subatomic interaction—one that slows down the smallest particles of the universe, including electrons and quarks, from the speed of light. The Higgs boson is a byproduct of the self-generating, self-interacting, omnipresent, invisible Higgs field.

“The way we observe its existence is because, by those interactions, particles acquire mass and therefore do not move at the speed of light,” says Marcela Carena, director of international relations and head of theoretical physics at Fermi National Accelerator Laboratory.

Scientists hope to find out if there is more than one kind of Higgs boson, whether the Higgs interacts with the mysterious dark matter particles, and whether they can detect evidence for a theoretical phenomenon called supersymmetry.

The Higgs particle is named for Peter Higgs, who shared the 2013 Nobel Prize in physics with François Englert for independently proposing how particles acquire mass.

“Peter Higgs and his colleagues created the simplest possible version of doing that,” Oreglia says. “There are alternative theories that can create this particle we’ve seen called the Higgs. One of the interesting tasks is to see which family this thing belongs to.”

Perhaps the best way to determine that is to monitor how often the Higgs decays into electrons, bottom quarks, top quarks, charm quarks, and the W and Z bosons. Different models provide different ratios.

According to prevailing theory, the Higgs decays into two bottom quarks, the most frequent mode, 57 percent of the time. “We haven’t seen them yet,” says Young-Kee Kim, UChicago’s Louis Block Professor in Physics. “That’s because even if there are a lot of them, it’s just hard to detect a bottom quark jet. You don’t see free quarks.”

Oreglia focuses his work on the decay of Higgs into two Z bosons versus two W bosons. “That can be a big differentiator for some important models if you can measure those ratios,” Oreglia says. But that’s a challenge, because after the Higgs decays into the W and Z, those bosons in turn each decay into two quarks. And all the particles in the spray move in the same general direction in sometimes overlapping jets.

Should physicists discover evidence for dark matter or supersymmetry, they would step into the territory of new physics. They would be defining physical laws that reach beyond the Standard Model, which describes the fundamental structure and behavior of ordinary matter.

“Supersymmetry is a many-faceted theory,” Oreglia says. “By that I mean there are a lot of parameters, and those parameters could be very unkind.” Those parameters could lead to phenomena that easily conceal themselves behind the background noise that a particle physics experiment typically generates.

“It could be tough going. We’re hoping that’s not the case, but it could take a long time, or even be impossible, to unravel the SUSY signal from background signals that have a much higher production rate,” he says.

Supersymmetry may also help unmask dark matter’s secret identity. “One of the wonderful, sort of accidental ideas of supersymmetry is that it naturally provides a candidate dark matter particle,” Miller says. “That’s exciting because that’s one of the biggest questions we have on our minds. What is dark matter?”

Dark matter accounts for more than a quarter of the matter and energy in the universe. So far, attempts to detect dark matter in association with supersymmetry have failed. Consequently, Miller says, “I’ve started to look in the dark and dirty corners where other people didn’t want to look.”

Subatomic particle jets are where it’s hard to find dark matter. Particle jets happen to be Miller’s specialty. If there are certain instances suggesting that dark matter particles are missing—and there are many potential technical reasons for that—then dark matter might easily elude detection.

If the Higgs decays into a pair of dark matter particles, all that physicists will see in the ATLAS detector is a missing quantity of energy and momentum in the direction of their travel.

“Missing energy is the canonical signature of dark matter and supersymmetry,” Miller explains. “But if the energy isn’t missing, if it somehow got converted into something else, then you might miss it completely because you were looking for something that isn’t happening.”

One possibility that Miller is evaluating is situations that involve decays of dark matter or dark matter-like particles into many quarks, which manifest themselves as jets in the detector. Unfortunately, jets are difficult and complex, but if physicists can figure them out, the results may achieve Homeric proportions. 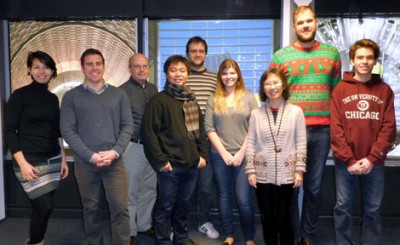 Caption: ATLAS group members include UChicago faculty David Miller, Bruce Pilcher, and Young-Kee Kim along with a number of graduate students and postdocs, shown here during a visit to the Large Hadron Collider at CERN. 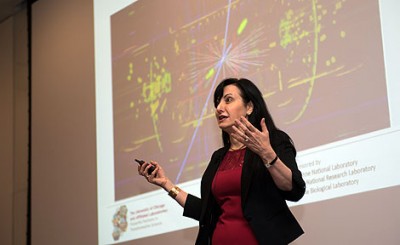 Caption: Prof. Marcela Carena, head of theoretical physics at Fermilab, is one of several UChicago scholars doing research on the Higgs boson. 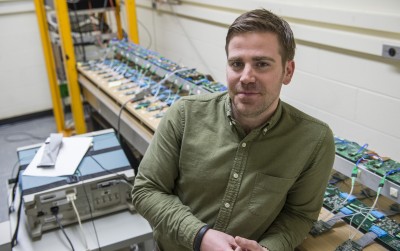 Caption: David Miller, assistant professor in physics, works on electronics that will bring new capabilities to the trigger system of the ATLAS detector. 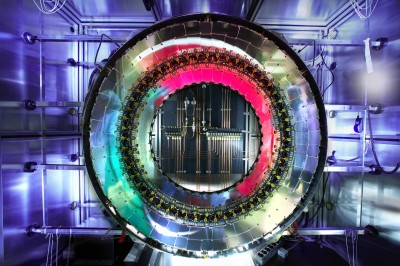 Caption: The Large Hadron Collider began taking data in June 2015 for the first time in two years. After a shutdown this winter, the LHC started colliding protons, allowing researchers to continue their follow-up studies.