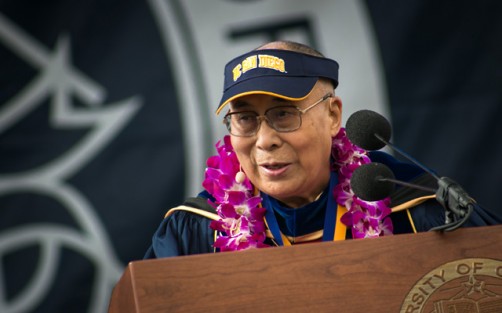 Newswise — “You have the opportunity to create a better world, a happier world,” said His Holiness the 14th Dalai Lama, who delivered the keynote address to 25,000 University of California San Diego graduates and their families today during the university’s All Campus Commencement. His message to graduates centered on the power of compassion and the importance of emotional knowledge. He emphasized that through loving kindness toward others, the next generation can manifest a more peaceful world.

A record number of 9,000 students graduate from UC San Diego this weekend, including Richard “Ricky” Flahive, who was the undergraduate student speaker at today’s ceremony. As a first-generation, low-income student who wasn’t sure he would even graduate high school, Flahive had to restart multiple times to defy the odds.

“It is beyond my wildest dreams and expectations to share the stage with the Dalai Lama,” said Flahive. “I am very humbled, considering I didn’t always see myself going to college.”

The Dalai Lama, who spoke to graduates on the topic of “The Value of Education, Ethics and Compassion for the Well-Being of Self and Others,” also presented a public address at the university on June 16.

“He has a very powerful message, not just for the UC San Diego community, but for the world—that the path to true happiness leads through compassion and generosity for others—and I think we need that today more than ever,” said Mandy Bratton, Ph.D., lecturer at UC San Diego’s Jacobs School of Engineering and executive director of Global TIES.

The All Campus Commencement kicks off graduation weekend at UC San Diego where Chancellor Khosla officially conferred degrees by academic division upon graduates gathered as one student body. Following the ceremony, the campus’s six undergraduate colleges, two professional schools and various graduate programs host personalized graduation events where more than 9,000 undergraduate and graduate students walk across stage as their names are read.

Celebrating graduation with the whole campus was important to Annalise Miller. The bioengineering major from Eleanor Roosevelt College said, “I worked really hard for four years and I am very proud to be to be here. It’s very exciting to have the Dalai Lama speak.”

The visit by Tenzin Gyatso, His Holiness the 14th Dalai Lama, was organized in partnership with The Friends of the Dalai Lama Foundation, founded by Ven. Lama Tenzin Dhonden, the Personal Emissary for Peace to His Holiness the 14th Dalai Lama. His Holiness was invited to speak because his message of compassion aligns with UC San Diego’s mission of education, research and public service. Ranked first in the nation by Washington Monthly for contributions to the public good, the university seeks to create solutions to societal challenges.

For those who were not in attendance and are interested in viewing the Dalai Lama’s public address or commencement keynote, please click here.