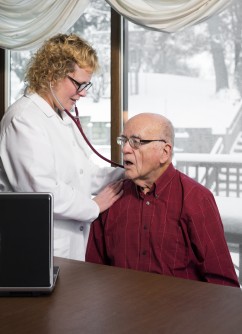 Newswise — ATS 2016, SAN FRANCISCO – Home-based pulmonary rehabilitation may be equally effective in improving fitness and quality of life as a traditional center-based program for COPD patients, according to new research presented at the ATS 2016 International Conference.

“We know that pulmonary rehab is a highly effective treatment for COPD because it improves exercise capacity and symptoms and keeps people out of the hospital,” said Anne Holland, PhD, professor of physiotherapy at Alfred Health and La Trobe University, Melbourne, Australia. “But less than 10 percent of all COPD patients in developed countries enter a pulmonary rehab program.”

According to Dr. Holland, a number of factors contribute to that fact, including lack of programs and inadequate or no medical reimbursement. Another factor, she said, is that for people who are short of breath, traveling to a hospital or other medical facility for rehabilitation on a regular basis “may seem impossible.”

Dr. Holland and her colleagues created a unique 8-week at-home program and compared the results with their hospital’s traditional outpatient program in a randomized controlled trial of 166 patients.

After an initial visit from a physiotherapist, those in the home program decided on their own exercise program and reviewed their fitness goals and progress on a weekly call with a health care professional. The caller was trained to motivate patients by asking questions that helped patients focus on what improvements were important to them. Those in the traditional program attended twice weekly sessions at the hospital. Each session included group exercise and education.

Results on all measures were comparable between participants in the two study arms immediately following program completion. Among home-based participants, 6MWD increased by 28 meters, compared to 29 meters for center-based participants. Neither group, however, retained primary or secondary gains 12 months later—a finding consistent with previous studies. Researchers also tracked hospital admissions and health care utilization and are currently analyzing that data.

“We would need appropriate funding models that recognize a telephone call from a health care professional can be a treatment,” she said. “We’re not there yet in Australia, and I suspect in most countries around the world.”Contact for study: Anne Holland, PhD, [email protected]

Results: There were no significant between-group differences in clinical outcomes at any time point. The change in 6MWD post-intervention confirmed non-inferiority of home-based PR and the confidence interval (CI) did not rule out superiority (mean difference between groups 18.60 meters, 95% CI -3.55 to 40.71 metres). At 12 months the CI did not exclude inferiority of home PR (-5.14 meters, -29.40 to 19.13 meters). At end rehabilitation, dyspnoea-related quality of life on the Chronic Respiratory Questionnaire was non-inferior following home PR and superiority to center-based PR could not be excluded (1.57 units, -0.34 to 3.48 units), whilst results were equivalent at 12 months (-0.10 units, -2.16 to 1.97 units). Neither group had maintained post-rehabilitation gains at 12 months. Costs of delivery were $USD 219 for hospital PR and$USD 209 for home-based PR.Conclusions: Low cost home-based PR delivers short-term clinical outcomes that are at least equivalent to traditional center-based pulmonary rehabilitation programs, but neither model maintained these gains at 12 months. Home-based PR could be considered for people with COPD who cannot access center-based PR programs.