Hubble Finds Evidence for Dark Energy in the Young Universe 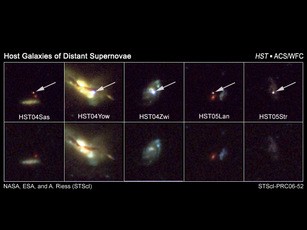 NASA, ESA and A. Riess (STScI/JHU)

These snapshots, taken by NASA's Hubble Space Telescope, reveal five supernovae, or exploding stars, and their host galaxies. The arrows in the top row of images point to the supernovae. The bottom row shows the host galaxies before or after the stars exploded. The supernovae exploded between 3.5 and 10 billion years ago.

Newswise — Scientists using NASA's Hubble Space Telescope have discovered that dark energy is not a new constituent of space, but rather has been present for most of the universe's history. Dark energy is a mysterious repulsive force that causes the universe to expand at an increasing rate.

Investigators used Hubble to find that dark energy was already boosting the expansion rate of the universe as long as nine billion years ago. This picture of dark energy is consistent with Albert Einstein's prediction of nearly a century ago that a repulsive form of gravity emanates from empty space.

Data from Hubble provides supporting evidence that help astrophysicists to understand the nature of dark energy. This will allow scientists to begin ruling out some competing explanations that predict that the strength of dark energy changes over time.

Researchers also have found that the class of ancient exploding stars, or supernovae, used to measure the expansion of space today look remarkably similar to those that exploded nine billion years ago and are just now being seen by Hubble. This important finding gives additional credibility to the use of these supernovae for tracking the cosmic expansion over most of the universe's lifetime.

"Although dark energy accounts for more than 70 percent of the energy of the universe, we know very little about it, so each clue is precious," said Adam Riess, of the Space Telescope Science Institute and Johns Hopkins University in Baltimore. Riess led one of the first studies to reveal the presence of dark energy in 1998 and is the leader of the current Hubble study. "Our latest clue is that the stuff we call dark energy was relatively weak, but starting to make its presence felt nine billion years ago."

To study the behavior of dark energy of long ago, Hubble had to peer far across the universe and back into time to detect supernovae. Supernovae can be used to trace the universe's expansion. This is analogous to seeing fireflies on a summer night. Fireflies glow with about the same brightness, so you can judge how they are distributed in the backyard by their comparative faintness or brightness, depending on their distance from you. Only Hubble can measure these ancient supernovae because they are too distant, and therefore too faint, to be studied by the largest ground-based telescopes.

Einstein first conceived of the notion of a repulsive force in space in his attempt to balance the universe against the inward pull of its own gravity, which he thought would ultimately cause the universe to implode.

His "cosmological constant" remained a curious hypothesis until 1998, when Riess and the members of the High-z Supernova Team and the Supernova Cosmology Project used ground-based telescopes and Hubble to detect the acceleration of the expansion of space from observations of distant supernovae. Astrophysicists came to the realization that Einstein may have been right after all: there really was a repulsive form of gravity in space that was soon after dubbed "dark energy."

Over the past eight years astrophysicists have been trying to uncover two of dark energy's most fundamental properties: its strength and its permanence. These new observations reveal that dark energy was present and obstructing the gravitational pull of the matter in the universe even before it began to win this cosmic "tug of war."

Previous Hubble observations of the most distant supernovae known revealed that the early universe was dominated by matter whose gravity was slowing down the universe's expansion rate, like a ball rolling up a slight incline. The observations also confirmed that the expansion rate of the cosmos began speeding up about five to six billion years ago. That is when astronomers believe that dark energy's repulsive force overtook gravity's attractive grip.

The latest results are based on an analysis of the 24 most distant supernovae known, most found within the last two years.

By measuring the universe's relative size over time, astrophysicists have tracked the universe's growth spurts, much as a parent may witness the growth spurts of a child by tracking changes in height on a doorframe. Distant supernovae provide the doorframe markings read by Hubble. "After we subtract the gravity from the known matter in the universe, we can see the dark energy pushing to get out," said Lou Strolger, astronomer and Hubble science team member at Western Kentucky University in Bowling Green, Ky. Further observations are presently underway with Hubble by Riess and his team which should continue to offer new clues to the nature of dark energy.

For images and additional information about dark energy on the Web, visit:http://hubblesite.org/news/2006/52http://www.nasa.gov/hubblehttp://www.jhu.edu/news/news_info/news/