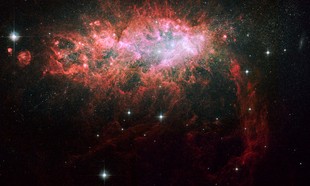 This image taken by NASA's Hubble Space Telescope showcases the brilliant core of NGC 1569, of one of the most active galaxies in our local neighborhood. The entire core is 5,000 light-years wide. The galaxy sparkles with the light from millions of newly formed young stars. NGC 1569 is pumping out stars at a rate that is 100 times faster than the rate observed in our Milky Way galaxy. This frenzied pace has been almost continuous for the past 100 million years. The core's centerpiece is a grouping of three giant star clusters, each containing more than a million stars. (Two of the clusters are so close they appear as one grouping.) The clusters reside in a large, central cavity. The gas in the cavity has been blown out by the multitude of massive, young stars that already exploded as supernovae. These explosions also triggered a violent flow of gas and particles that is sculpting giant gaseous structures. The sculpted structure at lower right is about 3,700 light-years long. Huge bubbles of gas, such as the two at left, appear like floating islands. The largest bubble is about 378 light-years wide and the smallest 119 light-years wide. They are being illuminated by the radiation from the bright, young stars within them. Some of those stars are peaking through their gaseous cocoons. The biggest and brightest objects surrounding the core are stars scattered throughout our Milky Way galaxy. In contrast, the thousands of tiny white dots in the image are stars in the halo of NGC 1569. The galaxy is 11 million light-years from earth. A new analysis of NGC 1569 shows that it is one and a half times farther from Earth than astronomers previously thought. The extra distance places the galaxy in the middle of a group of about 10 galaxies centered on the spiral galaxy IC 342. Gravitational interactions among the group's galaxies may be compressing gas in NGC 1569 and igniting the star-birthing frenzy. Hubble's Wide Field Planetary Camera 2 and Advanced Camera for Surveys made the observations of NGC 1569 in September 1999, November 2006, and January 2007.

Newswise — Astronomers have long puzzled over why a small, nearby, isolated galaxy is pumping out new stars faster than any galaxy in our local neighborhood.

Now NASA's Hubble Space Telescope has helped astronomers solve the mystery of the loner starburst galaxy, called NGC 1569, by showing that it is one and a half times farther away than astronomers thought.

The extra distance places the galaxy in the middle of a group of about 10 galaxies centered on the spiral galaxy IC 342. Gravitational interactions among the group's galaxies may be compressing gas in NGC 1569 and igniting the star-birthing frenzy.

"Now the starburst activity seen in NGC 1569 makes sense, because the galaxy is probably interacting with other galaxies in the group," said the study's leader, Alessandra Aloisi of the Space Telescope Science Institute in Baltimore, Md., and the European Space Agency. "Those interactions are probably fueling the star birth."

The farther distance not only means that the galaxy is intrinsically brighter, but also that it is producing stars two times faster than first thought. The galaxy is forming stars at a rate more than 100 times higher than in the Milky Way. This high star-formation rate has been almost continuous for the past 100 million years.

Discovered by William Herschel in 1788, NGC 1569 is home to three of the most massive star clusters ever discovered in the local universe. Each cluster contains more than a million stars.

"This is a prime example of the type of massive starbursts that drive the evolution of galaxies in the distant and young universe," said team member Roeland van der Marel of the Space Telescope Science Institute. "Starburst galaxies can only be studied in detail in the nearby universe, where they are much rarer. Hubble observations of our galactic neighborhood, including this study, are helping astronomers put together a complete picture of the galaxies in our local universe. Put the puzzle pieces in the right place, as for NGC 1569, and the picture makes much more sense."

Aloisi and her team actually discovered the new distance by accident. They were using Hubble's Advanced Camera for Surveys to hunt in NGC 1569 for the kind of red giant stars (stars near the ends of their lives) that shine because of fusion of helium nuclei in their cores. These stars are dimmer than bright red giants without helium burning, but when detected, they can be used to estimate the galaxy's age.

"When we found no obvious trace of them, we suspected that the galaxy was farther away than originally believed," said Aaron Grocholski of the Space Telescope Science Institute and the lead author on a paper describing the results. "We could only see the brightest red giant stars, but we were able to use these stars to recalibrate the galaxy's distance." Bright red giants are reliable "standard candles" for measuring distance because they all shine at the same brightness. Once astronomers know a star's true brightness, they can calculate its distance from earth.

Previous estimates of the galaxy's distance made with ground-based telescopes were unreliable because they looked at the galaxy's crowded core and were unable to resolve individual red giant stars.

"This was a serendipitous discovery," Aloisi said. "Hubble didn't go deep enough to see the faintest red giant stars we were hunting for because the galaxy is farther away than we thought. However, by capturing the entire population of the brightest red giant stars, we were able to calculate a precise distance to NGC 1569 and resolve the puzzle about the galaxy's extreme starburst activity."

The results were published in the Oct. 20 issue of the Astrophysical Journal Letters.

For images and more information about NGC 1569, visit:

STScI is an International Year of Astronomy 2009 (IYA 2009) program partner.